Customers can expect pastries like Tahinopita (with tahini, honey and raisin) or a Feta Cheese Flute (stuffed with warm, oozing feta cheese), in addition to coffee, tea and lunch items. 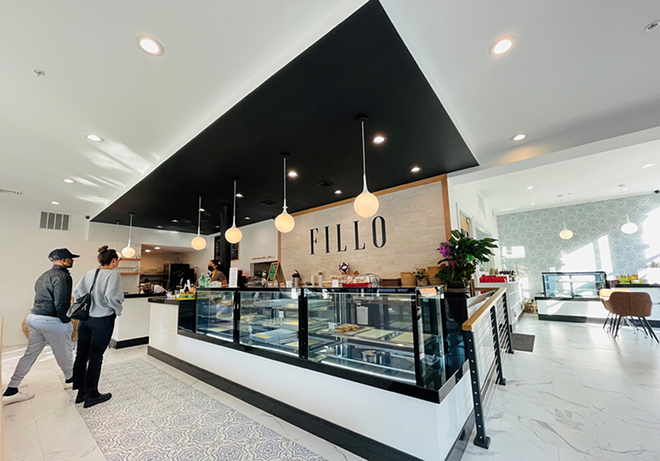 Serving up an assortment of flaky, buttery pastries and a robust menu of Mediterranean offerings, Fillo Greek Bake Shop is bringing a slice of Greece to Over-the-Rhine.

Entrepreneurial — and husband-and-wife — duo Evan and Evi Papanikolaou quietly opened the European-style café earlier this month next to Taft’s Ale House. While cooking and baking Greek foods has been a staple in their household for decades, this is the first time the family will monetize their talents (Evan previously owned and managed an automotive dealership in Fairfield).

Boasting a sleek interior design and natural lighting that glistens off marble tables, Fillo is a labor of love, with every detail of the 2,300-square-foot space impeccably planned.

The Papanikolaous write on their website: “We believe each bite honors the rich, simplistic flavors of our Greek heritage, and we proudly bring these flavors straight to Cincinnati. We believe our journey must begin at the very place where these savory and sweet goods have been embraced by locals for centuries — Greece.”

From the intricate homemade pottery flown in from Greece to the authentic pastries made from scratch, there is meaning behind every element of the restaurant, Evan tells CityBeat. The café is named after phyllo, the thin pastry dough included in so many of their menu items. And it’s a full-fledged family affair. In addition to Evan and Evi, the Papanikolaous’ oldest daughter, Angelina Papanikolaou — who is also the baker behind popular food blog bakedambrosia.com — helps with menu design and recipe development. Their two other daughters are involved in the café’s branding, marketing and public relations.

Evan and Evi, along with their staff, wake up in the earliest hours of the morning to craft authentic pastries, breads and desserts. Some of the recipes are two- and three-day processes. Evan says Fillo is always trying different recipes and menu items, but customers can expect delicious standards like Baklava, Tahinopita (a tahini, honey and raisin pastry) or a Feta Cheese Flute (a thin pastry stuffed with warm, oozing feta cheese). 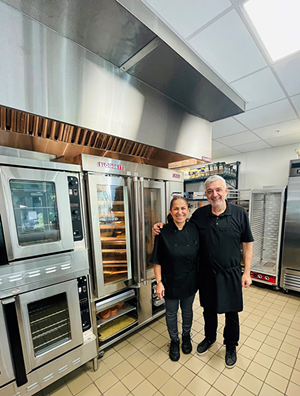 Customers can order from a full coffee and tea menu, which includes an authentic Greek coffee, a honey oat milk latte and a mocha, among other drinks. Tea offerings include a chai latte as well as black, cinnamon, green and chamomile teas.

Fillo also offers lunch items, like the popular Fillo Salata, an arugula salad with pear, caramelized manouri cheese, dried figs, pine nuts, mint and red and balsamic vinaigrette. There are sandwiches, like the Halloumi Panini with rustic sourdough bread, halloumi cheese, tomato and cucumber. The Kotopoulo Sandwich serves up lemon-and-garlic-marinated chicken, kasseri cheese, tomato and arugula on a toasted baguette. And the classic Greek lamb kebab is served in a pita with tzatziki, tomatoes, onions and parsley. To keep it authentic, an ice cold Mythos beer — a pale European lager you won’t find at many other restaurants in Over-the-Rhine — pairs well with any lunch entrée.

The café also carries Beeyond Bar, a brand of power bars created by two of the Papanikolaou sisters. By combining filling fats and protein (sesame and nuts) with high-energy carbs (honey and dried fruit), they came up with a crisp and slightly chewy snack.

Evan says that the atmosphere at Fillo is a large part of the experience for guests. In addition to the food, the outdoor patio lined with greenery offers an authentic tie to how Greeks dine overseas.

“The outdoor seating wasn’t part of the original plan, but it’s turned out so well and has been one benefit of this difficult time,” he says.

The outdoor area is part of dozens of permanent “streateries,” a combination of parklets and concrete bump-outs/sidewalk expansions created by the city of Cincinnati to help restaurants and diners feel safer dining out during the pandemic. When they were made permanent in December of 2020, Mayor John Cranley touted the benefits of the expanded seating and traffic-calming measures, as well as the ability of the streateries to add “vibrancy in the urban core.”

Currently, the café is open for limited hours and their team hasn’t been able to implement half of their ideas due to the worker shortage.

In a recent poll by the Ohio Restaurant Association (ORA), 65% of restaurateurs said staffing is a critical issue for them and another 26% said finding workers is in their top three “most-pressing” concerns.

Evan said customers will notice that their display case isn’t as filled with pastries and menu offerings as it should be — and they want to change that as they hire more staff. The restaurant is currently hiring pastry chefs, kitchen team members, bartenders, servers and baristas.

“We just haven’t been able to find the workers we need to do everything that we know we can do,” he says.

Fillo has a full liquor license and will eventually add a night concept with alcoholic beverages, music and additional menu items. Evan says he envisions Fillo transforming from a bakery during the day to a café that sells small plates of Greek dishes, cheese plates, cocktails, wine and beer by night.

“We want it to feel like an experience when people come in,” Evan says. “We have a lot of plans we haven’t gotten to yet. Hopefully, by next year, we can take full advantage of the space.”