Customers now will find flow in Northside and Over-the-Rhine in addition to Newport. 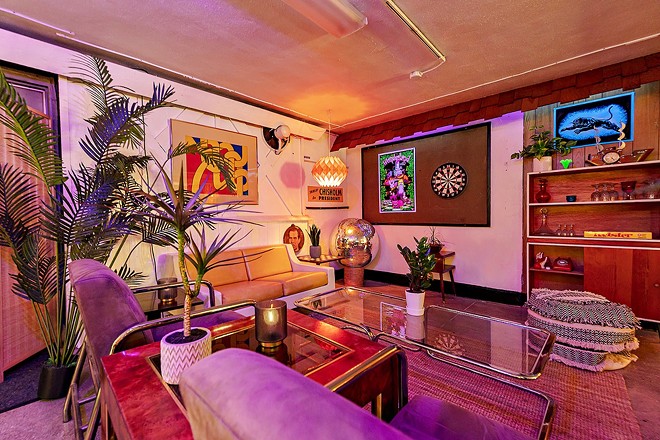 A local coffeeshop that opened its first location in Newport last year now can be called a coffee chain.

flow, known for its unique brewing method and touting a wine bar-style experience for coffee, recently opened two new locations north of the river in Cincinnati.

Customers of the Newport location of flow (stylized in lowercase letters) will find the new settings in Northside and Over-the-Rhine familiar. Each is adorned with work by local artists and feature a record player and hi-fi audio system for patrons’ listening enjoyment.

Like the original Newport location, the new shops revolve around collaborations with other businesses or organizations.

In Northside, flow shares a building with Liberty Exhibition Hall, a nonprofit community arts facility located inside a historic vaudeville theater. Situated one floor below the main theater, the coffeeshop features a full bar and a decked-out 1970s-styled lounge. flow owner Rhys Watkins says he hopes the coffeeshop’s presence will support Liberty’s mission and enrich the experience of visitors.

To that end, Watkins designed and built a custom hi-fi horn-based audio system for the main performance space used by Liberty. Weekly music acts perform in the lounge, which has about a 100-person capacity, Watkins says. “If it’s a larger show we can move it upstairs to the oldest Vaudeville theater in Cincinnati, which has been refurbished and refitted, in that full theater setting and that PA system.”

Watkins says that unlike a traditional high-wattage PA system, his system – dubbed “Sound by flow” – doesn’t compress the wavelengths before amplifying the sound.

“The shape of the speaker actually amplifies that sound, so it leads to a lot less distortion, much better clarity and a much wider sound stage,” Watkins tells CityBeat, adding that he plans to use the system for album listening parties, movie nights and live performances.

In Over-the-Rhine, the new shop also piggy-backs on an existing venue. The unassuming storefront on Central Parkway opens to a bright space that overlooks the sprawling courtyard of the neighboring OTR StillHouse. flow’s own outdoor patio connects the two.

A number of specialty drinks are available at the Over-the-Rhine location, including flow’s first cold brew coffee made with Bourbon-barrel aged coffee beans and a masala chai nitro kombucha. The location also boasts the largest selection of draft kombucha of all three flow shops.

Local collaboration continues in the decor and retail goods. In Newport and Over-the-Rhine, the shops feature plants from Fleurish Grounds, with Fleurish also selling vintage clothing and gifts at the Newport location.

In addition, a collaboration with OTR StillHouse and Knox Joseph Distillery has birthed a selection of custom cocktails available at flow. The GT Joe is a draft cocktail that gin, tonic and nitro cold brew coffee. The Health Kick and Botanical Booch combine draft kombucha with Knox Joseph’s vodka or gin. 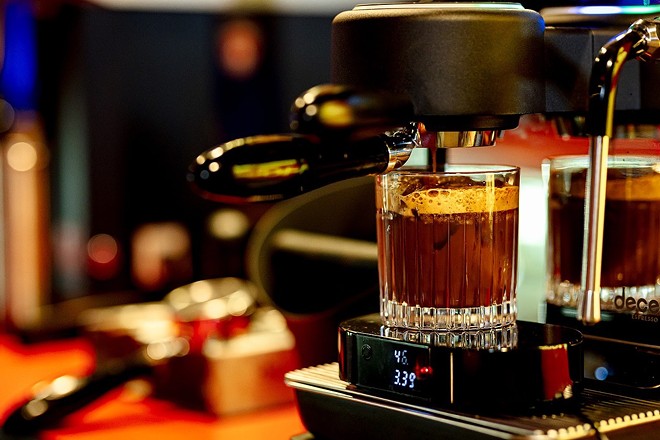 Photo: Hailey Bollinger
flow wants to revolutionize the way coffee is made.

Of course, coffee is the main draw at all flow locations. Surprisingly, Watkins wasn’t a coffee drinker until relatively recently, he says. As a chemist and former industrial manufacturing executive, his interest was piqued a number of years ago when a colleague described the coffee-making process as an “art,” in which everybody does things a little differently.

“I said, ‘That’s really amazing, but what do you mean?’” Watkins recalls. “It’s a process. It’s light manufacturing, if you really think about it. You’re manufacturing a good for people.”

Watkins says that conversation prompted him to look into what chemical and engineering research had been done on coffee, and he found very little. Aiming to improve the coffee-making process, he decided to conduct his own research. Watkins says he spent five years partnering with universities to do chemical studies on coffee. About three years in, he gathered a group to do a taste test on what he was working on.

“People were just floored. They couldn’t even believe it was coffee. It was a Rwandan coffee and it ended up tasting like apricots,” Watkins says.

With that success, Watkins moved forward with the research, which led to opening the coffeeshops now known
as flow. Watkins says flow uses custom grinders and brewing equipment that achieve up to 50% more extraction from the coffee beans.

“So you can really taste where and how the coffee was grown, just like wine,” he says.

“We let the coffee speak for itself,” Watkins says.