August was a sweet month for Cincinnati's dessert lovers. August was a sweet month for the Cincinnati dining scene with the opening of several brand new staples for Cincinnatians with an incurable sweet tooth. One of these sweet spots is French brasserie Royce, which finally opened inside of 3CDC’s $51 million development The Foundry in Fountain Square. On the healthier side, Cincinnati also got a new salad spot in Blue Ash. Unfortunately, though, Cincinnati dessert lovers lost O-Pie-O after an eight-year run and Rosie’s Cocktails & Pies, which is closed only temporarily for a “re-concept.” Ohio-favorite sweet, the buckeye, also received a special shout-out from Food + Wine magazine. Read on to discover more Greater Cincinnati food news you might have missed in August.

Royce
Fountain Square’s newest addition, Royce, opened on Aug. 9. The “modern French brasserie” opened at The Foundry, 3CDC’s $51 million development in the building that previously housed the downtown Macy’s. Royce was brought to life by Nashville-based restaurateur Terry Raley, who opened the popular oyster bar and restaurant Pearlstar in Sept. of 2021. Royce is “a French-leaning dining experience that will feature a raw bar as well as an open-air kitchen and dining room.” The spot looks out onto Fountain Square and the Tyler Davidson Fountain. 501 Vine St., Downtown, royce-cincy.com.

Barleycorn’s Brewhouse
Northern Kentucky chain Barleycorn’s has recently opened its first brewhouse. Barleycorn’s Brewhouse officially opened on Aug. 15 in Wilder, Kentucky. The spot, which was previously a fire station, is described as a “new twist on a classic, hometown brand.” The brewhouse focuses on featuring local craft beer and food plus their own house-made brews and eats from their test kitchen. There’s also a small selection of signature cocktails that range from the Bloody Mary to the Old Fashioned. The menu is loaded up with bar food classics with appetizers like deep-fried cheese sticks and chips and queso, as well as sandwiches like the dijon turkey club, fried fish and cheeseburger. 402 Licking Pike, Wilder, barleycornsbrewhouse.com.

Sleepy Bee College Hill Location
Popular Cincinnati brunch spot Sleepy Bee Cafe has officially opened a location in College Hill. Sleepy Bee, which offers brunch and lunch options focused on fresh local ingredients, opened its newest location on Aug. 21 as part of the $9.5 million project that is looking to revitalize College Hill, the KEYMARK development. The Sleepy Bee location is situated inside of what was a vacant “Furniture Store Building” on Hamilton Avenue. This new spot will be serving all the favorites from buttermilk pancakes to avocado toast to breakfast sandwiches, plus plenty of vegan and vegetarian options. 5920 Hamilton Ave., College Hill, sleepybeecafe.com.

Maya’s Bakes
Starting Aug. 31, woman-owned bakery Maya’s Bakes opened on Elm Street in Findlay market for a limited time. Owner Kemaya Molden will be serving up her sweat treats that she has been perfecting in her 20 years of baking experience. Maya’s Bakes was previously an outdoor market vendor and is part of Findlay Kitchen— a non-profit that focuses on supporting local food entrepreneurs. Molden bakes delicious homestyle treats that anyone can enjoy at the pop-up, as well as through DoorDash and local restaurants Embers and Trio Bistro. Maya’s Bakes will be open at this location until the end of the year. 1811 Elm St., Over-the-Rhine, mayasbakes.com.

O Pie O
Over-the-Rhine craft pie shop O Pie O closed its doors on Aug. 7 after eight years in business. The closure was shared on Facebook: “Thank you for all your support over the years. Nothing we've done or accomplished would have been possible without you,” read the post. There is a bit of good news, though: O Pie O's most popular menu item, the honey vinegar pie, will be available at Heyday, a burger spot in East Walnut Hills that O Pie O owners opened in April.

Rosie’s Cocktails & Pies Closes Temporarily
Downtown's Rosie's Cocktails & Pies is closed temporarily for a ‘re-concept.’ Rosie's, which first opened in the spring of 2021, closed its indoor dining on Aug. 24 and is set to reopen in early September as Rosie’s Italian. The space is set to transform into something that will “further showcase the generational Italian cuisine” that owner and chef Anthony Sitek grew up creating with his family. The new menu features made-from-scratch pasta, antipasti like ricotta toast and prime beef meatballs plus shareables like crispy potatoes and main dishes including chicken parmesan and New York strip. 300 E 7th St., Downtown, rosiescocktailsandpies.com.

Dorothy Lane Market's Buckeyes Called Out as Best Snack in Ohio by Food + Wine Magazine
Ohio has one more reason to refer to itself as the Buckeye State. And it's a sweeter accolade than just referencing our abundance of Buckeye trees and the existence of The Ohio State University's mascot Brutus Buckeye. Food & Wine magazine recently compiled a list of the "Best Snack in Every State," and Ohio's beloved buckeye candy was called out as the best bite in this neck of the woods. The magazine's strategy for figuring out each state's superior snack involved one major caveat: "In order to be considered, the food in question needed to be able to ship without a lot of effort. (In other words, probably no dry ice.)." To elevate the local connection, the magazine specifically named buckeyes from Dayton's Dorothy Lane Market as one of the state's best iterations of the chocolate-dipped peanut butter confection.

Fretboard Brewing To Open Location Inside of Upcoming Factory 52
Blue Ash’s Fretboard Brewing is opening a Norwood location inside of the Factory 52 development. Upcoming Factory 52 is a 20-acre mixed-used development project that already has many new businesses announced including Jeni's Splendid Ice Creams and Asheville-based Hi-Wire Brewing. The Fretboard Brewing location will be housed in ‘The Gatherall,' a space in the development which will host 14 different restaurants plus a rooftop bar. At their Blue Ash spots Fretboard currently offers food, live music, events and of course their house-brewed beers that range from their year-round classics to their seasonal offerings. No official opening date has been announced for the new location. 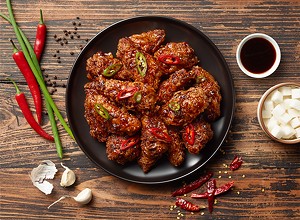 Photo: bbqchicken.com
Gangnam style chicken wings from bb.q Chicken
The new 3CDC development 4th & Race downtown will soon be home to several novel chain restaurants, at least for this area. Earlier this year it was announced that popular bakery Paris Baguette would be opening a storefront there — its first in Ohio. And now Korean fried chicken chain bb.q Chicken is slated to open at 4th & Race in early 2023. bb.q, which stands for "best of the best quality," was founded in Seoul, South Korea in 1995. It serves Korean-style fried chicken in a variety of flavors, like honey garlic, golden original and Gangnam style, with black pepper sauce. The menu also offers a selection of ddeok-bokki, a Korean street food made of rice and fish cakes, as well as sides like french fries, pickled radish and fried dumplings. bb.q. Chicken will be located at 150 W. Fourth St., Downtown.