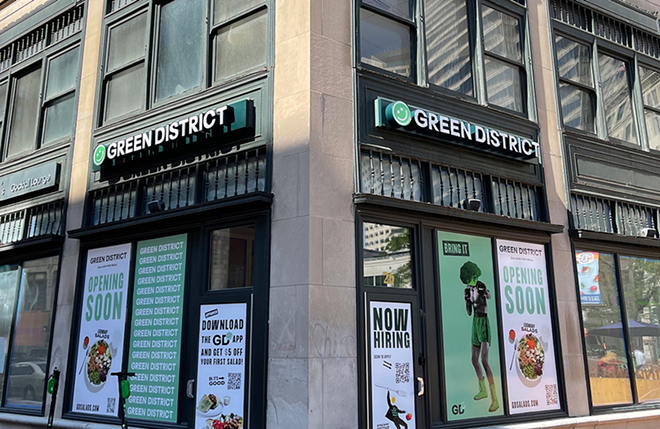 Louisville-based build-your-own salad chain Green District is jumping into the Cincinnati market with a splash (or a crunch — whatever sound salads make).

In July of last year, Green District announced they would be setting up shop on Fountain Square — their first location in Ohio. That restaurant at 33 E. Sixth St. (in the Fifth Third  Center lobby) will open its doors at 11 a.m. on Jan. 11. But the company has also signed leases to open storefronts in two other area neighborhoods in 2022: Clifton and Blue Ash.

“I was born and raised in Cincinnati and my family still lives here, so bringing Green District to this market was a high priority for me," said Jordan Doepke, Green District co-founder, in a release. "We’re looking forward to bringing more healthy options to the heart of Cincinnati and really immersing ourselves into the vibrant downtown community.”

The chain's menu includes a handful of signature salads, plus wraps and bowls. You can also build your own from a selection of more than 50 ingredients and 12 Green District dressings.  The Cincinnati locations will also have salads with a local lean, like the 513, made with Grippo's-spiced barbecue chicken, romaine, red cabbage, carrot, tomato, pickled jalapeno, cheddar, crispy onions, a barbecue drizzle and ranch dressing.

The 1,558-square-foot Fountain Square Green District offers both indoor and outdoor seating and is open 11 a.m.-5 p.m. Monday through Friday. The first 100 customers in line at the Fountain Square shop on Jan. 11 will get a free salad and a T-shirt.

The forthcoming Green District in Clifton will be located at 257 Calhoun St. and the Blue Ash location will be at 11255 Reed Hartman Highway. Both are slated to open later this year. Green District's Midwest Market President Lance Little, also from Cincinnati, says the chain's goal is to open at least eight stores in the Queen City.

For more info and a full menu, visit gdsalads.com.