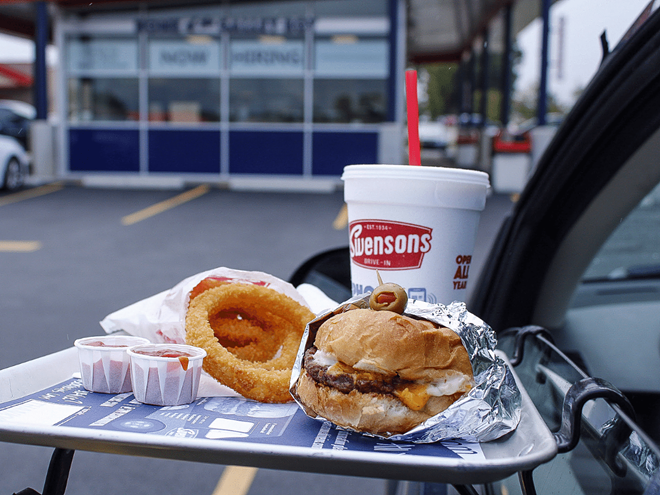 One of Ohio's most beloved hamburger joints finally is fully operational in Cincinnati.

Established in 1934, Akron-based Swensons Drive-In largely operates on an old-timey drive-in model, in which patrons park near the restaurant and a server takes orders at their car window. The restaurant grills all food upon order, and the server then delivers it back to the car — something that has especially worked during the pandemic.

In addition to the Galley Boy — the restaurant's signature double cheeseburger slathered with two sauces — Swensons is known for its milkshakes, malts, potato puffs and chili.

Swensons announced in July that it had begun constructing its first Cincinnati location at 491 Ohio Pike in Union Township, sending CityBeat readers into convulsions of joy.

Now, after a silent opening on Dec. 6, the Greater Cincinnati location has established its full operating hours. Since Jan. 10, Swensons is open 11 a.m.-11 p.m. Sunday-Thursday and 11 a.m.-midnight Friday-Saturday.

"We’re grateful for the opportunity to expand; it’s a testament to our incredible people and our loyal customers," Swensons’ CEO Jeff Flowers says in a release.

Swensons Drive-In has locations in Akron, Canton, Cleveland and Columbus. The Cincinnati outpost is the restaurant's first venture into the local tri-state region.