In honor of our beloved "diarrhea sludge" being ranked worse than getting hit by a car, get sweet revenge at dinner tonight by gouging on a 4-way with extra cheese and a side of extra cheese 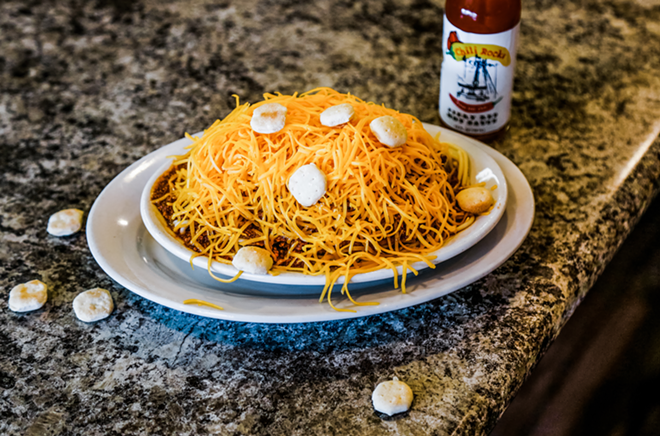 Photo: Hailey Bollinger
Deadspin? More like Tastebuds-Are-Deadspin, amirite?
It was six years ago this week that irreverent sports website Deadspin said mean things about Cincinnati’s trademark dish and the people of the Queen City collectively lost their shit.

As part of the site's The Great American Menu: Foods Of The States, Ranked And Mapped roundup, Albert Burneko had some not-so-kind words about our beloved delicacy, which was ranked dead-last of all the state dishes, coming in just behind "Getting hit by a car."

Here are some excerpts:

For the mercifully unacquainted, "Cincinnati chili," the worst regional foodstuff in America or anywhere else, is a horrifying diarrhea sludge (most commonly encountered in the guise of the "Skyline" brand) that Ohioans slop across plain spaghetti noodles and hot dogs as a way to make the rest of us feel grateful that our own shit-eating is (mostly) figurative. The only thing "chili" about it is the shiver that goes down your spine when you watch Ohio sports fans shoveling it into their maws on television and are forced to reckon with the cold reality that, for as desperately as you might cling to faltering notions of community and universality, ultimately your fellow human beings are as foreign and unknowable to you as the surface of Pluto, and you are alone and always have been and will die alone, a world unto yourself unmarked and unmapped and totally, hopelessly isolated. …

Cincinnati chili is the worst, saddest, most depressing goddamn thing in the world. If it came out of the end of your digestive system, you would turn the color of chalk and call an ambulance, but at least it'd make some sense. The people of Ohio see nothing wrong with inserting it into their mouths, which perhaps tells you everything you need to know about the Buckeye State. Don't eat it. Don't let your loved ones eat it. Turn away from the darkness, and toward the deep-dish pizza.

Many Cincinnatians are proud and protective of their city and Deadspin's chili takedown revealed the surprising forms that civic pride can take. It seemed like even locals who are similarly disgusted by Cincinnati chili stood up for the soup-and-spaghetti dish. It's like when you were a kid and you'd smack talk your mom, but then your friends would join in and you'd be ready to start throwing punches.

Some, of course, thought it ridiculous to even respond to the amusing trolling, others joined in on the culinary bullying (because the internet) and many were pleasantly or apathetically bemused by the whole strange spectacle.

Deadspin got a lot of mileage locally for its dis. Along with a steady stream of angered responses on the article itself (alongside some supportive hardcore haters), Cincinnati media had a field day defending chili and gave Skyline and Gold Star some primo advertising. And Deadspin itself has kept the gag going with follow-up/pile-on posts, as well as offering some counter perspective in defense of the "sludge."

FYI: The post is still open for your angry comments!

Get some sweet, cinnamon-spiced revenge tonight by ordering six 3-ways for dinner (with extra cheese and a side of extra cheese) at your favorite hometown parlor.

Below are some of the heroic defenders of Cincinnati chili who emerged in the aftermath over the years since the initial post to valiantly fight to preserve its honor (on Twitter).


@AlbertBurneko Hating on Cincinnati Chili? Little wonder you are a food critic for Deadspin, that's like women's fashion editor at ESPN

Am I morally obligated to boycott Deadspin for slandering Cincinnati chili? (No link because, duh.)