Findlay Market has thrived for decades without pizza — until now 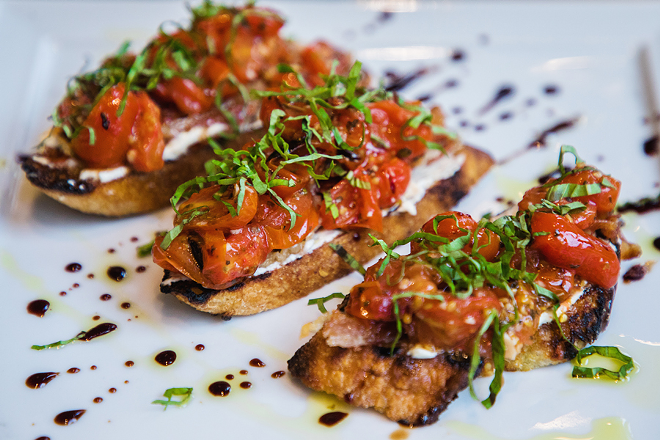 Photo: Brittany Thornton
The tomato and whipped cheese bruschetta is good enough to fight over.

I’m hard-pressed to think of a more universally beloved food than pizza. Humans have been enjoying some version of grilled or baked flatbread with toppings for thousands of years. We have so many places around town that serve pizza — not to mention an entire aisle of frozen ones at Kroger — because we just can’t seem to get enough of the stuff.

But one part of our city that has somehow managed to thrive for decades without it: Findlay Market. Until now. Because the market has become as much of a dining and entertainment destination as a place for people to do their weekly grocery shopping, a pizzeria makes perfect sense, and the new Harvest Pizzeria OTR fills the void.

Its Elm Street location represents the first venture outside the Columbus area for a company called Grow Restaurants. Grow Restaurants owner Chris Crader established two Harvest Pizzerias in downtown Columbus and a third in the suburb of Dublin. Cincinnati wasn’t really on the radar until longtime employee/chef Taylor Barnes told Crader he wanted to return to his hometown. In perhaps one of the best “good boss” stories I’ve ever heard, Crader said he would open a Harvest Pizzeria in Cincinnati where Barnes would be chef.

So that’s what happened, according to Taylor’s older brother, Seth Barnes, now general manager at Harvest OTR. “Taylor and I had a dream of working together, running a restaurant, and here we are two years later living out our dream,” Seth says.

To check out how they are doing, and of course to rate the pizza, my husband and I brought seven friends with us to Findlay Market on a Friday night. The pizzeria had only been open for business a couple of weeks and we probably accounted for one-quarter of the customers. While the market area slowly expands from a daylight-only stop, dinner and late-night venues might be a little slow in getting cranked up. But Harvest does add something important to the mix: an excellent version of one of Cincinnati’s favorite foods with plenty of tasty small plates, burgers, drinks and desserts for those who want more than the pie.

Having a large party meant we were able to try quite a few of the menu items, including a couple appetizers, two salads, a burger and three pizzas. Small plates ($6-$9) encompass everything from mixed olives with marcona almonds and herbs to pimento cheese with biscuits and pickles. Our table ordered bruschetta topped with whipped cheese, cherry tomatoes and candied prosciutto, among other ingredients. It was good enough almost to fight over. The other small plate we passed around was skillet-cooked Brussels sprouts in a cream and honey sauce topped with panko bread crumbs. Another hit.

All four of the salads ($5-$12) come in half or whole sizes, something I truly appreciate if I’m going to be eating a main course later. My farmer’s salad with butter Bibb lettuce, carrots, snow peas, cucumbers, radishes and cherry tomatoes had just the right amount of buttermilk herb dressing, another thing on my “thank you” list for restaurant salads. I have sent back many a soggy salad because of too much dressing.

One of our party has a severe sensitivity to carbohydrates and couldn’t partake of the pizza, so she got a burger in lettuce wrap. The kitchen did a nice job accommodating her with a bun-less version of its All-American burger ($13), with bacon, cheddar and other toppings.

The rest of us selected our 12-inch pizzas: fennel sausage (with three cheeses and red onion), roasted garlic (dotted with spicy chilies and topped with arugula salad) and margherita (tomato and cheese with basil), at prices ranging from $12.75 for the margherita to $15.75 for the sausage.

The wood-fired ovens must have been backed up because we waited  for what felt like an unusually long time between our appetizers and the appearance of the pies. Meanwhile, we talked over the din — it was a noisy environment — and sipped from a good selection of local and regional craft beers along with a few wines by the glass. Bar manager Jamie Clements has put together an interesting cocktail list, but we were all drinking lighter that night. I’d like to go back and try some of his whiskey-based drinks.

At last, our pizzas started to appear and we passed them around the table for everyone to try the various combos. Sausage is hard not to love on a pizza, and except for a couple of vegetarians among us, we approved of the Harvest version. Highest compliments went to the roasted garlic pie, even though the potent Calabrian chilies unexpectedly zapped a few taste buds. I liked it best, too, and for some reason didn’t have a single piece of the chilies in my slices, though I wouldn’t have minded a bit of a kick.

“My new favorite pizza,” one of our companions announced after we had polished off the last bit of crust.

We tried two desserts: the Buckeye Brownie ($7), served hot in an iron skillet and garnished with peanut butter, vanilla sea salt and vanilla ice cream; and Butterscotch Budino ($6), creamy pudding with hazelnuts and caramel sauce. I didn’t mind sharing the brownie with our friends but felt a little reluctant to let go of the pudding, a favorite dessert of mine.

General manager Seth made a gracious, attentive host to our large table and the servers did right by us, too. Based on the one visit, I’d say Harvest Pizzeria OTR will fit in splendidly as a Findlay Market neighbor.