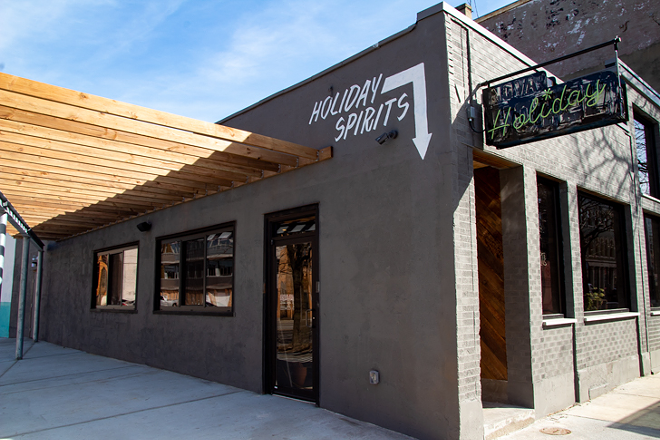 Holiday Spirits and its in-house street food eatery Forty Thieves is slated to open Tuesday, March 19 — just in time for the first day of spring and the Opening Day Parade (the building sits right on the parade route).

Helmed by Dan Wright and his wife Lana (of Senate, Abigail Street and Pontiac Bourbon & BBQ), with director of operations Mike Georgiton, the new space at the corner of Liberty and Race streets is meant to evoke the vibe of a dive bar and offers a menu of Arab and Israeli street food — falafel, beef shawarma and grilled chicken in a pita or on hummus, with other items like roasted beets and soup.

Fittingly, former Abigail Street sous chef Ethan Greene has taken over as chef of Forty Thieves. ("Ali Baba and the Forty Thieves" is one of the many tales in the collection of Middle Eastern folk tales, One Thousand and One Nights.

Patrons can order food from a counter inside or visit the walk-up window on the patio. The patio will seat about 50, with space for 100 to 120 inside.

The bar will feature 15 beers on tap and a menu of about 10 different cocktails ranging from a tequila old fashioned and a Hurricane to a Cinnabon-inspired drink and their take on a Harvey Wallbanger. They are also bringing their popular Senate Blue Ash “frose” (frozen rosé) to Holiday and will have a couple machines in house to spin cocktails.

Wright also wants to do blended drinks — like with a real blender.

“It’s something you don’t see anymore,” he says. “Anybody who goes on vacation anywhere, the one thing you do is, ‘Holy shit, a blended drink,’ whether it’s red or a piña colada, I’ve gotta try it. The idea behind that is a bunch of rainbow sherbet and vodka and orange juice, but it’s so just so damn good.”

Regardless of the colorful cocktails, you can still treat the space as a dive. “If you want to come in and order whatever your poison is, feel free,” Wright says. They’ll also have the industry-staple shot and a beer.

Wright and team are also in the process of arranging for a mural to be painted on the back of the building with the help of local artist William Rankins, Jr.

Rankins was the artist behind the popular painting — an advertisement for nearby Ollie’s Trolley featuring a giant hoagie, Steve Urkel and a dog, among other whimsical images — Holiday had to remove when they were stabilizing the space. When it’s done, it will be highly visible from Liberty Street.

“Steve Urkel is something I’m adamant I want to get back on the building because that was my favorite part of it,” Wright says.

The building was vacant before Holiday moved in and Wright sees the new bar and eatery as a way to sort of connect the development going on north and south of Liberty Street in Over-the-Rhine.

“I think it’s hugely important for this neighborhood and the vision of where it’s going,” he says.