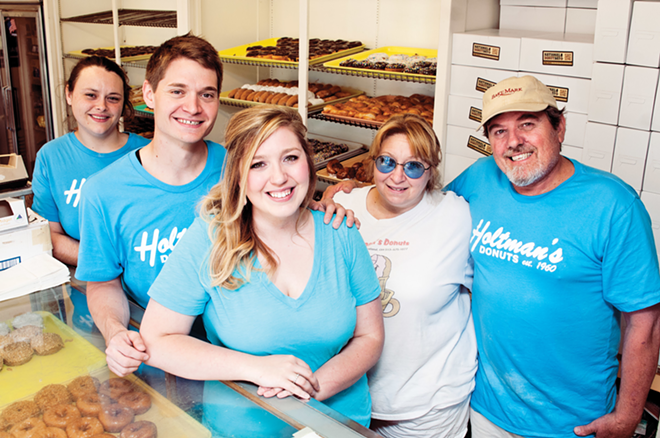 ertain pastries may come and go in popularity (we’re looking at you, cupcake), but the donut will outlast every food trend in the history of the world. No one understands this more than the Loveland, Ohio-based Holtman’s Donuts.

Charles Holtman opened his first donut shop in 1960 and at one point had 13 active shops around the area. In August, Holtman’s grandson Danny Plazarin and his fiancée Katie Willing will open the family’s first-ever downtown location, though the overall number of businesses only numbers three now — the two other Holtman’s locations — a shop in Loveland and one in Williamsburg, Ohio — are managed by Holtman’s daughter Toni and her husband Chuck Plazarin.

It took Plazarin and Willing two years to find their Over-the-Rhine home base on Vine Street near 14th, directly across from other neighborhood newbie, Quan Hapa. The couple says the storefront’s large windows will create a very interactive, visual environment.

“The actual baking area is going to bump right into the front windows,” Willing says, “so when you’re walking past, you’ll be able to look inside and see us baking.”

“We knew [the storefront] was perfect the first time we saw it,” Plazarin says.

At the OTR branch, the couple will continue the customs their family instilled: made-from-scratch donuts without preservatives, boxed mixes or powdered yeast. “We won’t be any different from the other shops, for the most part,” Willing says. “We want to make sure we’re not straying away from our traditions out there. Down here we’re excited to be a part of something greater than just our shop. “

Both Willing and Plazarin quit their corporate jobs to start their own bakery. “This is our baby,” Willing says. Or, as Plazarin adds, “our adventure.”

An adventure especially for Willing, who never baked before entering the family business. “I quit my job in February and I’ve been working with them out in Loveland full time,” she says. “It’s been great. I couldn’t ask for a different atmosphere to get in and just do something that now I realize I love doing.”

“At the same token, she’s a great marketer,” Plazarin says. “I don’t have a market kind of mind. I just know how to make donuts and do them well.”

Holtman’s concocts 50 varieties of donuts every day, including the ever-popular glazed, a maple and bacon, a Girl Scout-inspired Samoa and giant donut cakes for special occasions.

So, why does the donut endure? “A donut is a comfort food,” Plazarin explains. “A lot of people think of it as a breakfast food, but really it’s a comfort food. You can buy a donut for 95 cents, versus a cupcake that’s $4.”

“We don’t want to be just that breakfast item; we want to be that comfort food that people want to come in and try at 3 in the afternoon,” Willing adds.

Currently, their Loveland location bustles with donut love: Sometimes there are queues out of the door. “We’re hoping that we can keep up with the demand. Right now, we’re at full-capacity level. We’re pumping them out as fast as people are buying them. It’s overwhelming sometimes,” Willing says.

Despite the clamor, Holtman’s isn’t known outside of the area like Dayton’s Bill’s Donut Shop, which receives most of Ohio’s regional and national donut accolades. Willing thinks the new shop will bring more awareness to their brand. “I think once we can get more of the downtown [market], I think Bill’s got something coming for him,” Willing warns.

When Plazarin told his dying grandfather that he wanted to open a donut shop, Holtman responded with, “You’ll fall on your ass.” Despite that comment, Willing thinks the elder donutman would be really proud of his grandson. “We want to stay true to what we do, and in the next year we just want to be happy. We want to be successful, but we don’t want to be like, boom, and be this big name and die down in a couple of years like a trend,” she says.

In OTR, they plan on catering to the late-night drinking crowd. “Because sometimes after you’re done at the bar you want something sweet, so we kind of want to be open. … We kind of want to help out the crowd if they need a cup of coffee before going home. We’ll be there for them,” Willing says.