The eatery gives off Italian café vibes with a clever menu of whites, reds, light bites and more. 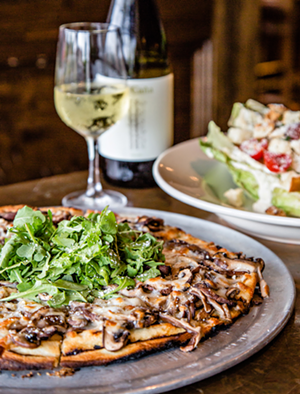 Even though it’s a Cincinnati neighborhood, Hyde Park feels like the suburbs to me. The chain restaurants in nearby shopping centers, some of which are technically in Norwood, make the area feel relatively homogenous. An exception to this vibe does exist in and adjacent to Hyde Park Square, an area that has an urban-village feel, although still populated mostly by white folks. A few of Hyde Park’s more interesting independent restaurants cluster near the Square, as well.

Tucked in a corner at one end of the Square proper is Cork & Cap, an establishment that opened more than a year ago with a wine bar focus that has rapidly evolved into a nice little restaurant. A friend of mine goes there often and invited me to join her one lovely evening. It was my first visit since it replaced the former J Bar Pizzeria, which took over the long-running spot of Indigo Café for a little while in April 2016.

The fact that we hit a perfect summer evening for relaxing on their large patio certainly helped to make me fall a little in love with the place, but that’s not the whole story. I’m all about the food when I eat out — you have to deliver on that score or all the clear skies and mild breezes on Earth won’t get me back again. Happily, Cork & Cap passed that test.

A selection of grilled pizza anchors the menu, with a couple of salads, casual small plates and a section of “mains” that range from burgers and sandwiches to one salmon entrée. There are also charcuterie and cheese offerings that you can mix and match. A selection of three, chosen from six meats and six cheeses, runs $18, while a plate of six is $36.

Manager Kyle Barthelmas says the original concept was a wine bar with “boutique wines from around the globe while offering a selection of fresh, from-scratch food options.” The principal owner is Abed Keis, a Hyde Park C.P.A., who delegates most of the food and drink decisions to Barthelmas and chef Crystal Swieton.

Given that Cork & Cap started as a wine bar, wine lovers will be happy to know that your grapey choices are many and varied. Clever minds organized the 70-bottle list into a dozen descriptive categories such as The Garden (“floral and aromatic, fresh and adventurous”) for white wines from parts of France, Spain, Germany and elsewhere, or Smoke (“rich and powerful wines with a dark side, laden with ripe, dark fruit”) for an array of California, Washington state and international reds. Or how about The Jungle (“tropical, rich and luscious, reminiscent of the warmth and density of the tropics”) for a couple of serious California chardonnays and an intriguing Spanish Godello?

Despite those intriguing options and a short but well-chosen selection of wines by the glass, I couldn’t resist the Italian wine flight ($15). My husband and I had visited northern Italy this summer and the offering of three half-glasses of wines from those regions went perfectly with the food my friend and I had ordered.

While I sipped the two white and one red wines, my friend enjoyed a strong and (she said) very creditable Manhattan on the rocks ($10). Later, we each had a glass of the Italian red that was part of my flight, a medium-bodied Super Tuscan.

I was impressed by the attentiveness and knowledge — especially about the wines — of every staffer we encountered. They paid just enough attention to us so that we felt unhurried while also competently served.

Dinner was simple but satisfying: We each had a grilled Caesar salad that topped a nicely charred grilled romaine with croutons, diced tomatoes, shaved parmesan, herbs and a creamy dressing ($9), and then we split a grilled pizza. I love the smoky flavor of grilled romaine, as well as other grilled lettuces, such as radicchio, and this version hit all the right notes.

Our wild mushroom pizza ($15) came bubbling hot with a finish of arugula salad, which reminded us of how pizza often is served in Italy.

We lingered into the evening on one of the patios — there are two adjacent outdoor spaces, decorated somewhat differently. I found out later that the difference resulted from Cork & Cap having to remove a dead shade tree from one side, which required re-engineering and leveling the space. While they were at it, they replaced the tables and chairs. Barthelmas said that by next season they hope to partially cover one side to create an “Italian café” ambience.

Dessert choices are minimal, but Barthelmas said that is a conscious decision that management made, in part because Graeter’s is just across the square and has been such an important anchor to the neighborhood.

“We would love to turn Cork & Cap into a Hyde Park staple — a 30-year-plus restaurant catering to the needs of the Hyde Park community,” he added. “We don’t necessarily strive to be the greatest restaurant in Hyde Park, we just want to be everyone’s favorite.”