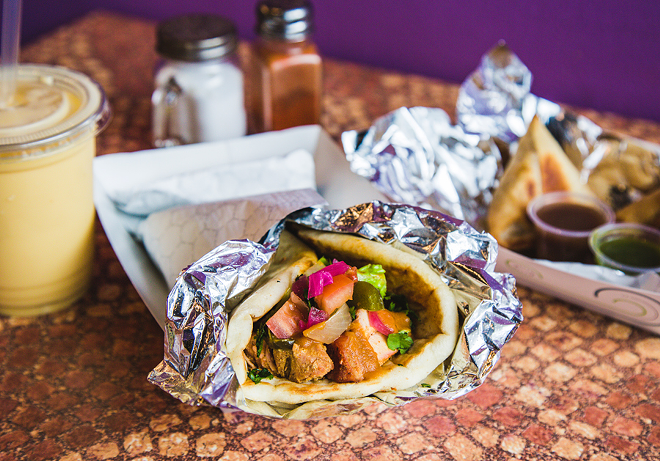 Photo: Hailey Bollinger
Indi-Go offers a healthier take on Indian favorites.
If her long-standing passion for cooking was the seed, the call Sujata Pai received from her son six months ago was the push she needed to help cultivate Indi-Go, Hyde Park’s destination for fast-casual Indian dining.

Nick, then a senior at Ohio State University, called his mom looking for suggestions for fast and affordable Indian food. When Pai could offer none, Nick urged her to open her own restaurant.

In September of last year, the Symmes Township resident did just that. Today you’ll find Indi-Go in the company of a nail salon and dry cleaner nestled in a quaint stripmall minutes from Hyde Park Square.

During a recent afternoon visit with a friend, I didn’t see the Indi-Go storefront and blew past it and the towering Hyde Park Keystone Bar & Grill next door. (Pro tip: Drive slowly and keep your eyes peeled once you turn onto Erie Avenue.) True to Ohio weather, it was much chillier than the day before and I was ready to eat my weight in carbs, go home and slip into a comatose state.

We pulled into the cramped parking lot out front and entered Indi-Go, finding ourselves in a small, purple-walled dining area with a few tables, refrigerators for beverages and a selection of herbal powershots ($1 for turmeric or beet root). There were a handful of tables to choose from, but I imagine the lack of seating might cause some to take their food to go during busier hours. Smiling cheerily behind the counter was a woman I later learned was Pai, chef and owner, sporting a black apron and purple foam sun visor. She immediately greeted us and offered details and advice on the menu, giving us samples of available sauces. Her enthusiasm for the food was infectious.

Like many restaurant ventures of late, Indi-Go follows the same fast-casual, assembly-line approach as Chipotle. Options range from basmati rice bowls and naan wraps to pizzas and salads, which can be dressed with protein, a signature sauce, veggies and chutney to control the spice level. I sometimes struggle with ordering at Indian restaurants, but the ability to build my dish step by step made it a straightforward process.

When adopting this approach, Pai kept in mind that some people are unfamiliar with Indian offerings.

“This way they walk in and everything is there on the line so they can look at things and they can pick what they want,” she says. “That’s making it easier for them to go and get Indian food.”

Bread is my cardinal sin, so I specifically scouted the restaurant for its naan wraps. I stuck with my tried and true chicken tikka ($7.99) for my protein with the tikka masala sauce, basmati rice, tomatoes, pickled onion and a drizzle of the medium chutney in a naan wrap. My friend opted for paneer ($7.25) in a naan wrap with tikka masala sauce, basmati rice, tomato and the sweet and sour chutney. We each got a mango lassi ($2.99) and shared a side of samosas ($3.99).

Beneath the tin foil — in which the naan wraps had been tenderly swaddled — the bread was warm and plush. Tender chunks of chicken doused in tikka masala sauce were cradled inside mine. Pai had proudly told us before we ordered that all of her sauces are vegan and made without cream or ghee, a clarified butter traditionally used in Indian dishes. The result was a tikka masala with a mellow heat that boasted flavors reminiscent of squash or pumpkin.

The complexity of the dish came from the pickled onions, which were pleasantly sharp, and the green-hued medium chutney, which carried the heat for the rest of the meal. Cool notes of mint made for a chutney that was both spicy and refreshing. Sipping on a sweet mango lassi between bites took me to summer days long past, with turmeric, ginger and lemon.

My friend’s paneer wrap ($7.25) was also good, but if you’re a meat eater, it isn’t worth passing up the tender chicken offered at Indi-Go. If you’re looking for something more adventurous, the sweet and sour chutney paired with the tikka masala is a worthy voyage. As someone partial to heat, I would suggest testing Indi-Go’s hot chutney option; the medium might be too mild for spice lovers.

In addition to bread, I’m a sucker for samosas, so when Pai prepared our side order (two for $3.99) and set the basket down at our table, I experienced emotional distress convincing myself to share. I was pleased to see that the fritters were served with medium and sweet-and-sour chutney for dipping. Inside the samosa shell were piping-hot spiced potatoes and peas. While samosas are sometimes fried, Pai takes a healthier approach and bakes hers — no grease and all the goodness.

As a yoga teacher, Pai’s background in Ayurveda, an ancient medical system from India, influenced her decision to strive for healthy options on Indi-Go’s menu. She incorporates fresh ginger, cumin seeds — which Pai powders herself — and turmeric, all of which have purported benefits as antioxidants and digestive aids.

After sucking down the last of our mango lassis and paying for our meal (Pai insisted we pay after we ate), I felt light yet satisfied. This was a pleasant surprise — Indian tends to leave me feeling bogged down and lethargic. If you’re in the mood for Indian but don’t want to feel weighed down, Indi-Go is a healthy option that doesn’t sacrifice any flavor.