The eggnog from Hartzler Family Dairy is in demand — and for good reason. 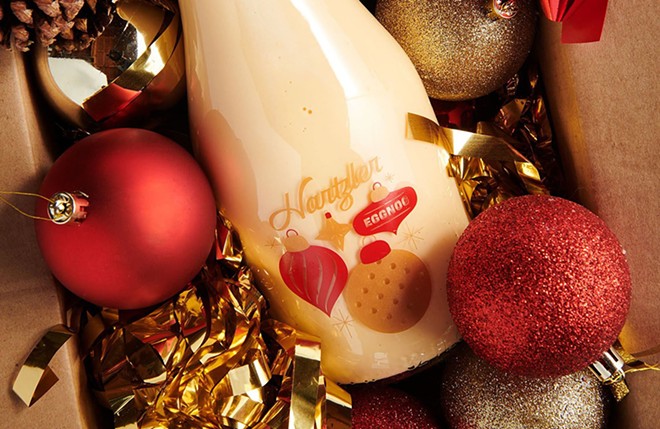 Wooster, Ohio's Hartzler Family Dairy is a Queen City favorite. Its hormone-free, minimally processed, non-GMO milk is sold in glass bottles at places like Whole Foods, Fresh Thyme, IGA and the Clifton Market. And the company is still run by the family, specifically the founders' sons.

And while it isn't unusual for Hartzler to jazz up its milk — the dairy makes the self-proclaimed "world's best" chocolate milk along with other flavor infusions like strawberry and orange cream — it goes all-out with the eggnog during the holidays .

It's a creamy cult favorite for the taste, but also because it's produced in a limited quantity.

"Before the dairy started, the family used to make eggnog at home, from scratch, on the farm, using fresh milk and ingredients available to them. After the dairy opened, the family wanted to continue the tradition by sharing it with the community," Hartzler retail manager Jacob Hazlett tells CityBeat via email.

"Without giving away any secrets, the biggest differentiator between our eggnog and everyone else's is that we make sure we don't hold back on the cream."

This year, Hartzler's eggnog comes in a specially designed glass bottle featuring a vintage ornament motif in gold and red. Hazlett says the bottles are "designed, printed and shipped throughout the summer to make sure we have them, in addition to all of our ingredients, in time to kick off the holiday season."

Because of the lead-time, there's only a certain amount the dairy can produce each year.

"We do our best to make sure that there is still some eggnog on the shelves for the New Year, but this year we will be cutting it close," Hazlett says. "I don't think we've ever seen a demand for eggnog this high before."

Hartzler's last eggnog production day will be Dec. 28, and the Wooster, Ohio, dairy will have it in stock until it runs out (Hazlett says they think they have enough to make it to Dec. 31). The dairy also has sent eggnog out to 200 retailers, including those mentioned above.

If you can't get your hands on their eggnog, Hazlett recommends the chocolate milk. He says at the farm, they also serve 40 flavors of ice cream, made on-site with Hartzler dairy, plus lunch, baked goods, butter, cheese and they just added an espresso bar.