Say "Hell no H20" at Coyote Jugly on Saturday. 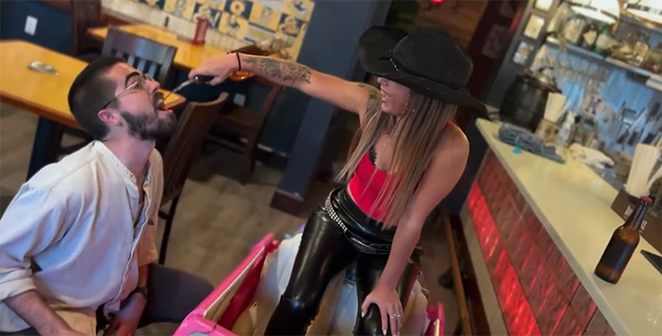 Photo: Screengrab from facebook.com/jerrysjughouse
A still from the Jerry's Jug House promo for Coyote Jugly. (This outfit is 100% accurate.)

The seminal Millennial touchstone film Coyote Ugly is coming to life at Jerry's Jug in Newport this weekend.

On Saturday, the bar is transforming into the famed New York City drinking establishment where women wore low-rise flares, high boots and danced on the bar. As such, Jerry's, which will be known as "Coyote Jugly," is recommending that patrons — and we can only assume bartenders — dress in "hip cut leather pants and crop tops" (or any other costume) for the theme party.

There will be specials on charcoal beer, red Jell-O shots and whiskey shots, plus Halloween eats like dirt cake and mozzarella snacks that look like fingers.

The bar has also snagged a Barbie Cadillac Escalade Power Wheels for a special photobooth.

If, like Piper Perabo's film character, you're an aspiring singer-songwriter from New Jersey who just wants to hit it big in the big city, there's no better place to be this weekend, especially if you're averse to water.

Jerry's has made a pretty spot-on trailer for the evening, which takes place Oct. 30 at the bar, located at 414 E. Seventh St. in Newport.

And if you are a Gen-Z-er who has no idea what Coyote Ugly is, didn't dream of someday wearing a very small button-up vest as a shirt and you can't sing all the lyrics to LeAnn Rimes' "Can't Fight the Moonlight," please educate yourself below:

And if you don't want to revisit the year 2000, here are 23 other Halloween parties and costume contests happening in Cincinnati this weekend.