Ione Sally launched Kombuchinnati in 2019, while a high schooler at SCPA. COVID took a toll on his burgeoning business, but he's ready to get back to work — and needs the community’s support. 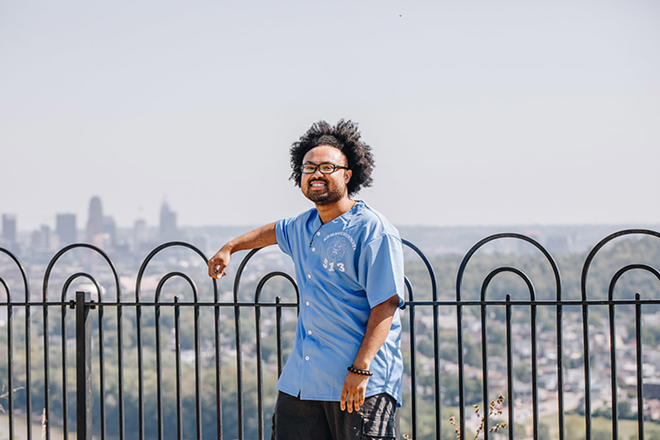 Ione Sally has big plans for putting Cincinnati on the nation’s kombucha map while providing entrepreneurship and learning opportunities to those who traditionally don’t get them.

But first, he has to get back to work, and he needs the community’s support to do it.

Sally launched Kombuchinnati Brewing Company, a small-batch kombucha business, in 2019 after learning about the fermented tea’s wellness properties from his foster mother (few scientific studies have been done on kombucha, but proponents claim it boosts the immune system and prevents digestive issues). At just 17, he had been shouldering a lot of stress — a stomach ulcer, a new home environment, a job, rehearsals — as a student at the School for Creative and Performing Arts, so he was ready for any boost he could get.

“I didn’t like it the first time, but I developed a taste for it,” Sally says of kombucha. “Eventually, you end up drinking it because your body needs the probiotics, not just because it tastes a certain way.”

Doing his own research, Sally developed his first kombucha recipe that he still sells today, which is fermented with elderberries to give more depth to the flavor. He dove further into his new hobby, bringing samples to school.

What Sally didn’t anticipate was that his friends wholeheartedly would embrace kombucha, as well, not only drinking it but also encouraging him to sell it. Sally’s kombucha became a hit on campus, and he began thinking seriously about how to develop a business around the drink.

“They told me, ‘This is better than what I can get at the grocery store,’” Sally says.

Sally’s trajectory was full-speed ahead for a while. In addition to his high school classes, Sally put together a business plan using entrepreneurial resources from SCORE, a national nonprofit business mentorship program. He was admitted into a culinary incubator program, where he could brew kombucha in a shared, professional kitchen while learning from other entrepreneurs.

He also reached out to Cincinnati beverage leaders like Scott Hunter, co-owner at Urban Artifact Brewing, and Allen Moellmann, master pilot brewer at Listermann Brewing Company, who shared their beer-brewing chemistries and business knowledge before Sally began pitching his products to local stores. Soon, Sally was stocking Kombuchinnati at ETC Produce and Provisions and Whole Foods, plus filling online and in-person orders. Business was good.

The COVID-19 pandemic hit Kombuchinnati hard, just as it did to so many other businesses. With lockdown and uncertainty, many customers were staying in and watching their finances, which started a domino effect. Fewer customers meant fewer orders. Fewer orders meant less revenue. Less revenue meant no way to pay rent at the incubator.

Top all of that off with Sally getting a bout of COVID-19, himself, and 2020 simply was not a fun year.

But now, with the pandemic slowly receding, Sally is rising again. He already has developed new flavors and is making plans to rent a professional kitchen where he can fill the kombucha orders that his returning customers have been clamoring for. He’s also planning collaborations and opportunities in which young would-be entrepreneurs can learn about how small businesses can make big impacts on their own neighborhoods.

“Once Kombuchinnati is making enough revenue, my company is going to be known as a force for good, not just in Cincinnati but across the world,” Sally says. “My mission statement is printed on my packaging, and the mission statement basically is to unite people of different socioeconomic backgrounds through not only our beverages but also the work that we’ll be doing for the community.”

“And when I say ‘community,’ I don’t just mean my community, the Black community. I mean communities around the world. Because let’s face facts, a ghetto is a ghetto everywhere, and we aren’t the only people to have issues,” he continues. “I feel like God put me here to positively impact the lives of many people before I die.”

That’s where the community comes in. Sally has launched a GoFundMe to restart Kombuchinnati and begin production to fill new orders. Those who donate $25 or more will receive a 25% discount on their first order.

Every dollar raised will help Sally achieve some pretty big dreams at such a young age.

“The overall goal is to produce 125 million barrels (of kombucha) a year. That’s roughly the same amount as what Budweiser produces. In order for that to happen, I’ll definitely need the support of more than just Cincinnati,” he says. “Honestly, I think (in the future, the kombucha market) will be really close to what the craft beer industry is doing right now.”

Learn more about Kombuchinnati and donate to the GoFundMe at gofundme.com/f/help-kombuchinnati-brew-again.