La Cantina — which started as a pop-up at downtown's Crown Republic Gastropub — will be led by Nada's former executive chef and will feature a menu of modern Mexican.

CRG — which owns Crown Republic Gastropub, Losanti and Rosie’s Cocktails & Pies — has brought Chef Johnny Curiel on board for the forthcoming La Catina.

Curiel, recently the Executive Chef at Nada, is bringing his years of experience and "modern-meets-authentic" Mexican style to the new restaurant, slated to open this winter. 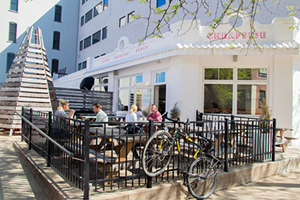 La Cantina started as a pop-up at Crown Republic Gastropub in July, with Curiel and CRG's chef/owner Anthony Sitek at the helm. The menu there featured dishes including elote, Baja fish tacos and chicken mole. And the full restaurant will offer the "same electric flavor and cultural inspiration...with a fully realized menu and robust cocktail program," reads a release.

“When we saw the amount of support and excitement around the La Cantina pop-ups this summer, we knew there was something special here,” says Sitek in the release. “We are looking forward to being able to further showcase Johnny’s modern approach to Mexican cuisine.”

Curiel has worked as both a chef and consultant, with leading roles in kitchens including Guard + Grace, Los Chingones and Lola Coastal Mexican (all in Colorado). When Curiel was 18-years-old, he traveled Mexico for several years, "learning traditional techniques from chefs and honing his skills," reads the release. When he was 21, he was mentored by the Mexico-born, Colorado-based Chef Richard Sandoval.

Curiel came to Cincinnati in 2020 to work at Nada, and helped revamp the menu there.