As Nietzsche once said, "God is dead." But beef and cheddars are not. 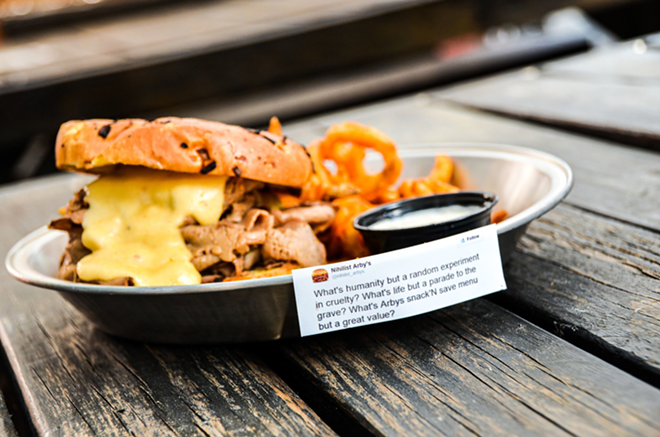 As Nietzsche once said, "God is dead." But beef and cheddars are not.

They exist and proof can be found Friday, Sept. 25 through Thursday, Oct. 1 at Northside Yacht Club's Nihilist Arby's pop-up, the first of its kind.

"Legendary musician, Punk rocker and Nihilist Arby’s twitter account owner/operator Brendan Kelly has given us the go ahead to become the first physical franchise," says NSYC co-owner Stuart MacKenzie in a release. "It’s the first time we’ve asked for permission to do a restaurant pop-up and we’re not even sure if he’s allowed to give it. Brendan’s played the club a couple of times and thought we’d be a horrible fit, but we’re the only ones willing to do it."

The NSYC has previously transformed into other edibly-themed entities like SkyRosa's — a Skyline and LaRosa's mashup — and, perhaps most infamously, an Applebee's.

Kelly has more than 393,000 followers on his @Nihilist_Arbys Twitter ("Officially, I have nothing to do with arby's. Unofficially, everything is nothing. Eat Arby's."), contemplating the meaningless of existence paired with a side of curly fries in tweets like:

NSYC has crafted a menu to mimic the Arby's menu (obviously, otherwise it would be named something else) with 24-hour sous-vide dry-rubbed beef, Sixteen Brick onion rolls and mornay sauce made with UrbanStead cheese. They are also offering Restaurant Depot curly fries, "because you can’t improve on perfection," says MacKenzie. "Just kidding perfection is a myth designed create unattainable goals that reinforces hegemonic norms and power structures."

For vegetarians (and vegans), there is a seitan steak option, crafted after they brought a vegetarian with them to Arby's for a little research and development and asked what vegetarian options are on the menu:

"The man working replied that they were sold out of the fish sandwich, but that we could order a meat sandwich and just take the meat off of it. That really happened. So that is our vegetarian option. We will serve you a meat sandwich and you can take the meat off," MacKenzie says. "If that’s not good enough for you, Jerry made some Seitan Steak which we thin slice and top with our mornay sauce or our cashew-based vegan cheese."

There's also a boozy spin on a Jamocha Shake: Van Gogh Espresso Vodka, Godiva Chocolate liqueur and oat milk. MacKenzie says it's vegan — "but I can assure you that it is not healthy but tastes so good you will forget not to care... about anything, in general."

Each sandwich comes with a Nihilist Arby's logo and an (un)inspirational tweet from Nihilist Arby's. And homemade RB's (Arby's) or Horse (Horsey) sauce.