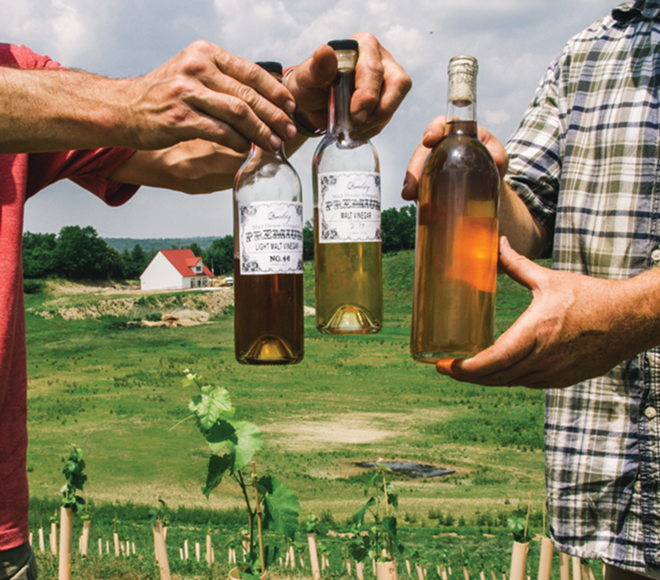 What if you could take unusable beer wort and transform it into something that’s not only edible, but will also help save the environment? Last year, Richard Stewart, farm manager at Carriage House Farm, teamed up with chef Justin Dean to reduce brewery waste with their line of Mad House malt vinegars.

“I started picking up spent grain from MadTree — actually, it was the very first batch they ever brewed,” Dean says. “I saw them on Facebook and gave them a high-five and told them congratulations and asked them what they’re doing with their spent grain, and they were like, ‘We were so excited over our beer that we totally forgot to even think about that.’”

Dean started showing up at the brewery every week to take the spent grain (the leftover malted barley and adjunct grains from mashing that is not used for fermentation) to feed farm animals and to compost.

After discovering more about the brewing process and the additional organic by-products, Dean asked MadTree if there were other ways to recycle the grain waste. “My question was, ‘Can I still ferment [the by-product] and turn it into beer and then turn it into malt vinegar?’ ” Dean says. MadTree said, why not?

One part of the brewing process is called sparging, or rinsing excess sugars off wort (the sugary liquid substance made from the mashing process of grain and water; yeast is then added to the wort during fermentation). If there’s low sugar content or low gravity — essentially if the wort isn’t up to par — the breweries dump the surplus wort down the drain, which wreaks havoc on the city’s sanitation system, so much so that the Metropolitan Sewer District wants to start charging breweries for their waste.

Dean’s solution is to use the unwanted wort to ferment his vinegar.

“One of the goals here is to keep as much of this stuff out of the waste stream as possible,” Dean says. “Then to be able to take something that the breweries are dumping down the drain, and utilizing it to make a line of vinegars, we think that’s pretty cool.”

Thus began Dean’s adventure into Mad House Vinegar, a play on names of MadTree, Carriage House and Dean as a mad scientist. “I like the mad scientist aspect of it,” he says. “My basement’s turned into a vinegar test lab.”

Dean has dabbled in fermenting kimchi, and he’s a classically trained chef who ran Covington’s Wildflour Bakery and opened several restaurants over the years as the former chief operating officer of the Relish Restaurant Group, including Local 127. He was a private chef for the Lindners and the general manager of Jean-Robert at Pigall’s. Basically, he knows what he’s doing.

The vinegars go through a two-step process. First, they “pitch” the wort with yeast and turn it into beer (the sugars turn into alcohol), which sometimes takes about two weeks to ferment. Then they do a second fermentation called acetification, using a vicious, creepy blob-like acetic acid called the “mother” that eats the alcohol and changes the substance into malt vinegar. Depending on what type of vinegar they’re making — barrel-aged vinegars take up to a year to complete — adding oxygen to the process speeds up the fermentation, and a batch of vinegar can be ready every two weeks. Dean is making light malt vinegar, dark malt vinegar, bourbon barrel-aged vinegar and is currently experimenting with fruit vinegars made with wine. He’s also making drinkable vinegars, herbal-infused vinegars and pawpaw vinegar, all of which are sourced from local growers.

“The cool thing about it is when I started looking at the malt vinegar, the thing that intrigued me is that every single style of beer from every single brewery in Cincinnati is going to make a somewhat different vinegar,” Dean says.

For instance, a Kölsch will taste slightly different than the malts used for making a Listermann peanut butter porter — just like beer itself, the vinegar flavor profiles will differ drastically. Dean also plans to hunt every brewery in town to take the wort off their hands.

Right now, Dean is making five-gallon batches out of his Fort Mitchell home, but Stewart is building an annex on the farm to house Carriage House Farm’s honey and Mad House production. They plan on ramping up production this summer or fall to 250-gallon batches and are hoping to win a $20,000 grant from Cincinnati Innovates to help cover the cost (you can go online and vote for them). They’ll distribute the vinegars locally to Carriage House’s vendors, Green Bean Delivery and Whole Foods, and Dean will ship vinegars to chefs all over the country in a food service gallon.

“There’s not a lot of good-quality vinegar out there, especially artisan vinegars,” Dean says. “A lot of these malt vinegars are made from wood pulp. It’s a whole industrial process, and then we’re taking it back to the old-school way of producing vinegars.”