UPDATE: Due to a small issue with the café's inspection July 3, Melt's opening has been postponed. Stay tuned on their Facebook page for a new opening date and more information.

As music from local and national touring artists permeates the streets of Northside during the annual Rock n’ Roll Carnival on the Fourth of July, the neighborhood’s Melt Eclectic Café will open the doors of its new and expanded restaurant location in the Gantry Building.

A known niche for vegan and vegetarian dishes — though there are plenty of menu items for omnivores and carnivores, too — the café was originally located at 4165 Hamilton Ave. (now home to Bridges Nepalese cuisine) and closed its doors at the end of 2016. The eatery will reopen at 4100 Hamilton Ave. with 3,000-square-feet of space in the mixed-use Gantry development.

Located across from Hoffner Park, site of the aforementioned annual Rock carnival (read more here), Melt will be open for dinner starting at 4 p.m. this Tuesday. The restaurant will continue to open at 4 p.m. daily until they release a lunch menu in the coming weeks, according to Lisa Colina, director of public relations for Wellmann’s Brands, which bought Melt in January 2016.

“We're bringing back the Melt classics from the menu we've had for over 10 years, with just a couple new salads to start,” Colina wrote in an email. “Chef Lisa Kagen (Melt’s original owner) has worked to maintain our menu that our friends know and love, with just a few tweaks of love to include some fresh new flavors and ways of serving the classics to ensure the best quality for every item on the menu. “ 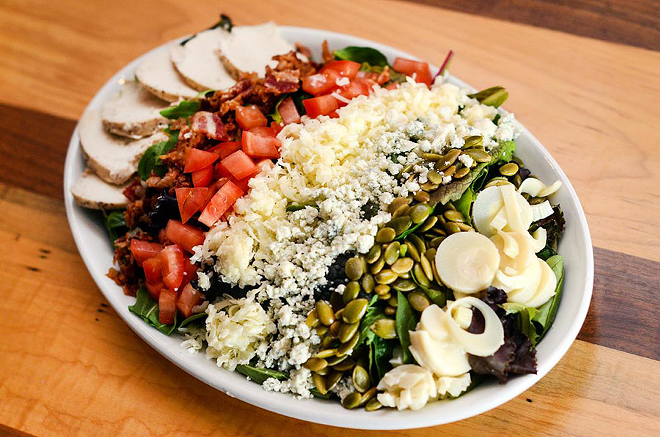 Items range from hand-crafted sandwiches, like favorites the Artichoke Melt and The Joan of Arc, to fresh wraps and salads such as the Avocado Bliss or the Spring Roll Toss. In true Cincinnati-fashion, the menu also includes Vegan Chili and a veggie 3-Way. All items can be made vegan and some can be made gluten-free.

Molly Wellmann, co-owner of Wellmann’s brand, has been working on a cocktail menu comprised of “approachable, unique, and flavorful” drinks made from scratch and of fresh ingredients. Cocktails will be available in the coming weeks.

Melt Eclectic Café also plans to be open for brunch on Sundays in the near future. Follow their Facebook for details to come as they become acquainted with their new space.