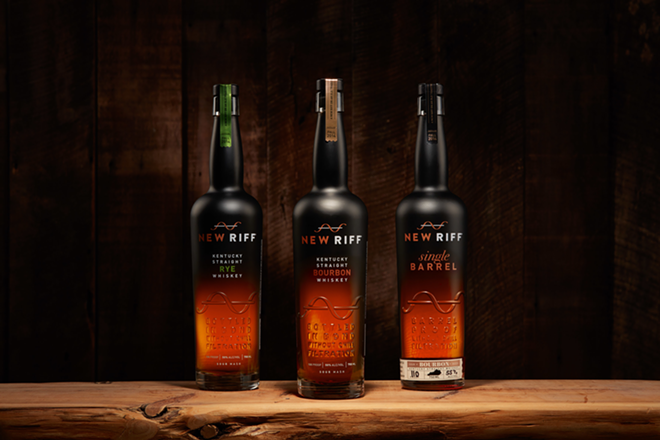 Men's Journal has released a list of the Best Single Barrel Bourbons You Should Try Right Now and the Best Hard-to-Find Bottles for the Whiskey Fan in Your Life.

New Riff describes their single barrel bourbon as, "New Riff Distilling’s core Bourbon expression is a genuinely high-rye, full bodied whiskey offering savory, spicy character, bottled at Barrel Proof without Chill Filtration. Featuring a mash bill of non-GMO grains at 65% corn, 30% rye, and 5% malted barley, it represents a new riff on Kentucky’s most hallowed whiskey traditions. Aged four years in 53-gallon toasted and charred new oak barrels, there are no shortcuts taken in our production. All New Riff whiskeys are made with the full sour mash Kentucky Regimen; all carry an age statement, and are always bottled without chill filtration... Each New Riff single barrel has been tasted and approved by our production panel."

Men's Journal prefaces its single-barrel list describing single-barrel bourbons as a "one-of-a-kind" experience, saying, "The beauty is in the simplicity: Generally speaking, every bottle you see with that moniker can be traced back to one single barrel, where it spent its entire life from distillation to bottling."

For New Riff, the magazine writes:

Without a doubt, New Riff’s single barrel program is one of the most exciting to explore in 2019. It seems to us every barrel has been unique, though they all show sharp caramel and creme brulee notes, with nutmeg and clove highlighting the rye spice. The whiskey can be relatively young, but it drinks mature and complex. When you see them, they’re a must-buy.

And as a best rare whiskey, they write:

Here’s the bad news first: New Riff is a limited-production distillery, and that limit is set by special access to an aquifer, which gives them only so many gallons of water a day for use in distillation. The good news: The bourbon coming out of this distillery is already incredible at just four to five years. Single barrels show a wide range of flavors, from smoky and citrusy to nutty and sweet. These single barrels have already cemented a modest collector status, but for the whiskey lover who thinks they’ve tried everything, this distillery is a whole new world.