Gluten-free from field to glass 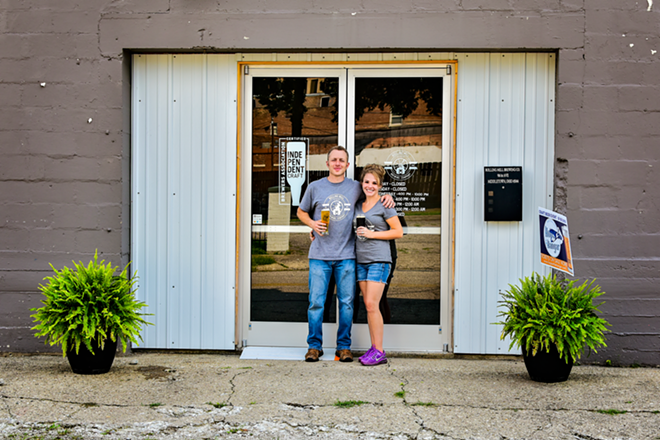 When Josh Laubach, a native of Middletown, was diagnosed with celiac disease in 2011, he set to work figuring out how to brew a gluten-free beer to satisfy his craft cravings. His experience with the disease is particularly acute — even a few parts per million of gluten can make him sick, which is an amount found in many gluten-removed beers. But homebrewing isn’t particularly easy, and it was much more complex without the option of using common gluten-containing ingredients like wheat, barley and rye.

What began as experiments in the kitchen with his wife Megan took on a bigger life in his garage where they tried sorghum extracts and gluten-removing enzymes, two typical methods for gluten-free brewing, but they weren’t quite what they were looking for.

“We settled on millet, buckwheat and rice as our grains,” Josh says.

The development of a gluten-free beer required doing many of the processes themselves: malting their own grain, which is a roasting process, and discovering what different proportions and combinations tasted like. Not everything was an instant hit.

“In the beginning, when we were learning, we made a lot of accidental sours,” Josh says with a laugh.

Photo: Provided by Rolling Mill Brewing Company
Inside the taproom

What emerged was a recipe that inspired Josh and Megan to open Rolling Mill Brewing Company in downtown Middletown. Their facility is one of about a dozen that serves nothing but gluten-free items, from the snacks to the beer taps, making it safe from cross-contamination for those with celiac disease.

The facility draws locals who simply want a tasty tipple from the range of IPAs, porters and lagers that Rolling Mill offers. They also draw substantial attention from people with a wide range of gluten sensitivities and allergies, as well as those who simply want a drink that is entirely natural.

“Middletown has a great water supply; the base water on the Great Miami Aquifer is great, so we take great water, hops, gluten-free malt and yeast,” Josh says. “We can’t quite meet the German beer purity laws, but we are close.”

Back in 2016, Megan and Josh were looking for a way to move his homebrewing operation out of the garage and into a facility where people could build community and enjoy beer together. They noticed a building that just might be perfect.

“We’d driven past this building for years, and it wasn’t for sale. We found out who the owner was and said this was where we wanted to be,” Megan says. “I’m not sure what made it seem right to us — the windows were painted shut, no bathrooms, no electric. We renovated for a year before we opened.”

In December 2017, the couple opened the brewery, and even as 18 months have passed and Rolling Mill has begun canning some of its beers, their lives remain very busy.

“Josh and I are learning how to separate work and home life since he’s working a full-time job and I’ve got the three kids under age 8,” Megan says. “We wanted something we could do and keep them with us.”

Josh and many others in Middletown work for AK Steel, whose predecessor company ARMCO invented the continuous rolling mill, which gives the brewery its name. Photographs of family who have worked in the steel and iron industry decorate the interior of the building.

Each of their signature beers has a connection to the company or to their family.

“We have a good variety of beer,” Megan says. “We describe Two Goldens as an easy, go-to everyday drink. We have some awesome IPAs, like Three’s Chaos, which is named after (having) three kids in three years, so that is the hoppiest beer. Federalist is an American pale ale, and two darker beers, the brown ale and the stout. Both of those names reference AK Steel: Ingot, for ingot iron, and Open Hearth.”

Open Hearth stout and the Three’s Chaos IPA are just as good, if not better, than beers containing barley or other grains. The IPA tastes lighter than others, but still has the distinctive bite of hops.

As they’ve scaled their product, some of the aspects of the process have gotten easier: They no longer have to malt their own grain, though every part of the recipe is processed in dedicated, gluten-free facilities, giving weight to their claims of being totally gluten-free.

One of the metrics by which Josh and Megan measure the tastiness of the beer is by the wide variety of people who don’t need gluten-free beer but still drink Rolling Mill. They estimate that 70 to 80 percent of their customers have no gluten intolerances. Megan points out that there is nothing lacking, but rather new craft beer flavors to explore.

“Give us a try; don’t let the gluten-free derail you. We’ve had people literally sitting here and they will overhear a conversation and say, ‘Wait, this is gluten-free beer?’ So that says something. We think anyone can love it,” she says.