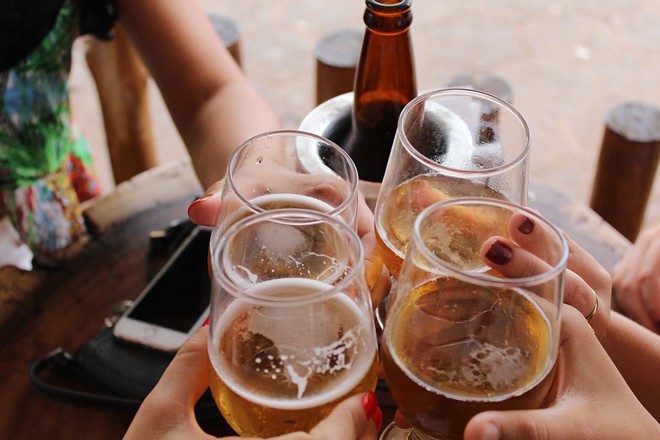 Want to drink some beer unlike anything else? Missing Linck Festival will give you the chance to try some thoroughly new-meets-old school beers made by 10 local breweries using a 150-year-old yeast that was recently discovered in a forgotten Over-the-Rhine cellar.

Missing Linck Festival is a celebration of single-cell organisms, their contribution to brewing and their seemingly unshakeable grip on life, so revelers at the festival literally drink their health. Hosted by Urban Artifact and Humble Monk Brewing Co. in Northside, this drinking festival starts at noon on June 4 and will last until the beer runs out.

Cincinnati is historically linked with beer due to the vast amount of German immigrant-owned breweries that operated in the city from the 1800s to Prohibition, a boon for the nation thanks to the land and river trade routes that Cincinnati intersects. While antique memorabilia, old brewing facilities and decommissioned equipment are what's left of our city’s bygone pre-Prohibition brewing days, Cincinnati also has a living piece of history in an active strain of 19th-century brewing yeast.

Beer is made by means of fermentation, in which yeast (single-celled fungus microorganisms) eat sugars found in a slurry known as wort, a sweet infusion of ground malt or other grains. Alcohol and carbon dioxide are excreted by the yeast, converting the grainy sugar water into beer. It’s both fundamentally simple but incredibly complex on a microbiological scale when you want the end result to be tasty, which is why certain yeasts have been found preferable for brewing over other strains – hence," brewer’s yeast," or Saccharomyces cerevisiae. That’s what was discovered by author and local historian Michael D. Morgan alongside Urban Artifact’s brewmaster and co-owner Bret Kollmann Baker and head brewer Josh Elliott in some abandoned OTR lager cellars.

The festival’s name comes from brothers Frank and Joseph Linck, German immigrant beer brewers who opened their lagering cellars in 1855. After the Lincks subsequently closed shop in 1860, their cellars were rented out by notable local brewers of the time, including Christian Moerlein.  According to the festival’s website, “The Linck Brewery cellars were rediscovered by accident in 2016. This happens. It's kind of a Cincinnati thing.”

Found near Findlay Market, the Linck cellars were sealed off since what’s believed to be Prohibition times, when Cincinnati’s acclaim as a brewing city took a hit due to federal laws prohibiting the sale and production of alcoholic beverages. When fermentation vats were found in one of the sub-basement lagering cellars, Morgan and the Urban Artifact crew went in to do a bit of detective work. They swabbed for samples from the inside of the fermenting vats to see what traces of the “good old days” could be found.

Chicago-based Omega Yeast Labs ran some tests on the team's samples and verified they had some tractable brewer’s yeast, which they named Missing Linck Yeast. The team gave Missing Linck Yeast to Cincinnati as “a living piece of our collective history,” and former Cincinnati City Council member Chris Seelbach introduced a resolution to declare June 1, 2019 "Missing Linck Day" in Cincinnati, which the council unanimously approved. The yeast is available through Omega Yeast Labs for home brewers to order and utilize in their next beer batch.

“The yeast has a lot of Belgian and Saison kind of properties to it,” Morgan says. “We have several people that have used it to do things like weiss beers and other styles of wheat beers and I think that it works well in those two. Very simple golden ales really let this yeast shine through, but everybody's got their own approach.”

Morgan is author of Cincinnati Beer and Over-the-Rhine: When Beer Was King, two historical plunges into the various aspects of Cincinnati’s longtime relationship with beer. He is known through the city for his beer-centric work as a historian, is linked to the development of OTR's popular Bock Fest, and is adjunct instructor of Hops & History: Introduction to Beer, a class for students ages 21 and older at the University of Cincinnati.

Kegs will be tapped at noon. The event also will feature ticketed tours of the host breweries, cheese pairings courtesy of The Rhined, live music by Kyle Hackett and Vehicle, a live beer-themed podcast recording and food from Amasijos Empanadas, Tickle Pickle and NYPD Pizza.