This culinary endeavor that takes inspiration from a style of Japanese cuisine known as “yoshoku,” which incorporates Western recipes with Eastern ingredients and sensibilities Mochiko is a new Cincinnati culinary endeavor that takes inspiration from a style of Japanese cuisine known as “yoshoku,” which incorporates Western recipes with Eastern ingredients and sensibilities. Erik Bentz cooks the savories and Elaine Townsend bakes the sweets.

If you’ve dined at Money Chicken or Pleasantry recently,  it’s possible you’ve seen adverts for one of Mochiko’s pop-up events. Bentz’s ramen, omurice and fried katsu cutlets are served alongside Townsend’s beautiful and diverse range of pastries and desserts. Since their first pop-up in May, they’ve already established a cult-like following — some devotees have yet to miss a meal and their August dinner at Money Chicken sold out in the first hour.

“Ultimately our endgame is to open up our own place, but right now we’re just putting our name out there,” Townsend says. Bentz and Townsend met in California and decided to pursue a career together. Both earned degrees in the culinary arts at their respective colleges: Townsend studied at Orange Coast College, while Bentz went to the Midwest Culinary Institute at Cincinnati State. Afterward they set up shop in Chicago. While there, Townsend was a pastry chef and ran the bakery at Fat Rice, where she developed desserts with Chinese, Macanese and Portuguese influences. Bentz was the chef at The Izakaya at Momotaro, acclaimed for its Japanese comfort food. Originally from this area, Bentz knew there was potential to bring their style of Japanese food to Cincinnati.

“I always wanted to come back here to cook,” Bentz says.

Mochiko currently works out of the Incubator Kitchen Collective in Newport, and recently invited us for a tasting of their dishes. Bentz prepared two different noodle bowls and an egg and rice dish and Townsend served three kinds of pastries.

If you’ve explored all of the city’s ramen options, you owe it to yourself to experience a bowl of Mochiko’s incredibly thoughtful noodle soup. Mochiko gets its noodles from Keizo Shimamoto, who operated New York’s acclaimed Ramen Shack. Shimamoto now makes noodles in small batches and Bentz figures a Mochiko pop-up is the only place to eat them outside of New York City. 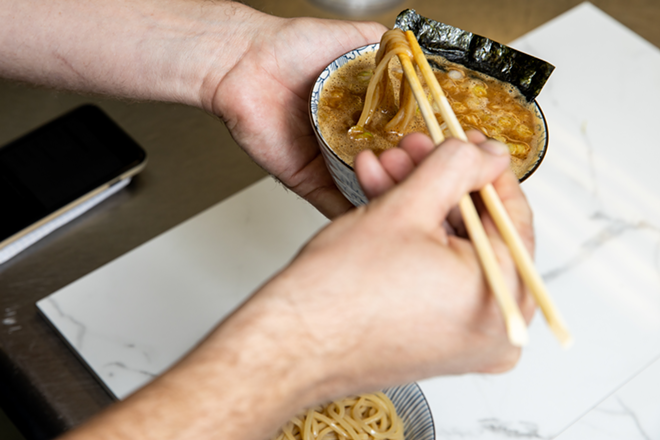 While noodles boiled on the stove in the Incubator Kitchen, Bentz started to build a bowl of tori shoyu ramen. He began with a ladle of chi-yu, clarified rendered chicken fat from bones provided by TS Farms in New Vienna, Ohio. Then came the shoyu tare, a soy sauce-based concentrate, and then broth — clear and beautifully fragrant when mixed with the other liquids. Shimamoto’s noodles were then dropped in and arranged with care. Tender char siu (essentially Chinese barbecued pork), sliced chicken breast, boiled egg, pickled bamboo shoots and sliced scallion went on top, then more chi-yu to give it a beautiful sheen, with a nori garnish.

After, Bentz served gyokai tsukemen, something I’ve never eaten: cold noodles dipped in a separate bowl of hot seafood broth with an egg and pork. This broth captured the salty essence of the sea with a fleet of thick umami-packed flavors. The cold noodles created a wonderful contrast to the hot soup. Slivers of lemon zest cut through the rich broth with a citric zing.

The final dish was omurice, a captivating piece of performance art. A specially shaped mold was filled with chicken fried rice and an eye-shaped omelet was placed on top. The performative flair came in when Bentz delicately sliced the top of his seamless omelet with a razor-sharp knife. The omelet unfurled like an umbrella and creamy scrambled eggs rained down from the center. Bentz then poured a ketchup-based sauce on top, heavy with Worcestershire, giving the dish a salty acidic kick. To take a bite you had break through a mouthful of egg into the chicken fried rice with your chopsticks and lift the parcel into your mouth with the care of a game of Jenga.

Now on to Townsend’s pastries. First up was mochi. Mochi is a subcategory of wagashi, which is a variety of Japanese treats popularly paired with matcha tea. Townsend’s was shaped like an intricate flower with dozens of overlapping hand-cut petals. Wagashi are often made to resemble seasonal produce, so in wintertime you could expect the dessert to be shaped like a chestnut or a sweet potato instead of a blossom.

This mochi was made with rice flour and buckwheat for the wrapper with a decadent filling of chocolate and Earl Grey tea ganache — not a strictly traditional filling like sweet bean paste, but so delicious.

Next on the bakery tray was a blueberry sticky bun dusted with kinako, which is roasted soybean flour that’s similar in taste and texture to peanut butter powder. This is Townsend’s take on peanut butter and jelly. Blueberry jam is cooked into the brioche-like pastry for a sweet contrast to the toasty nuttiness of the kinako.

Her ume kouign-amann is a hybridization of sorts: a French croissant-like pastry glazed with syrup made from salted and pickled Japanese plums. The bun looks like an ocean wave, the way the dough has been folded like an accordion. The sweetness from the plum essence complements the laminated buckwheat’s buttery layers, only to have your palate shift to the slightly tart aspects of the pickled juice. Seek the pastry out at Pleasantry and 1215 Wine Bar & Coffee Lab. (Mochiko’s vanilla melonpan, a fluffy sweet bun that resembles a ripe melon, is also available at 1215.)

Townsend says she likes to bake with what’s seasonal, so expect to see a variety of offerings as their business expands.

Mochiko’s sweet and savory offerings are simultaneously works of art and delicious meals made from conscientiously sourced ingredients and crafted with masterful precision. The duo elegantly prepares food that is informed, but not limited by, traditional methods.

“I just do classic Japanese dishes,” Bentz says. “Japanese food, if you’re Japanese, there’s not a lot of rules. But if you’re not Japanese, you have to follow some rules. You’ve got to do it old-school... It’s just about caring.”