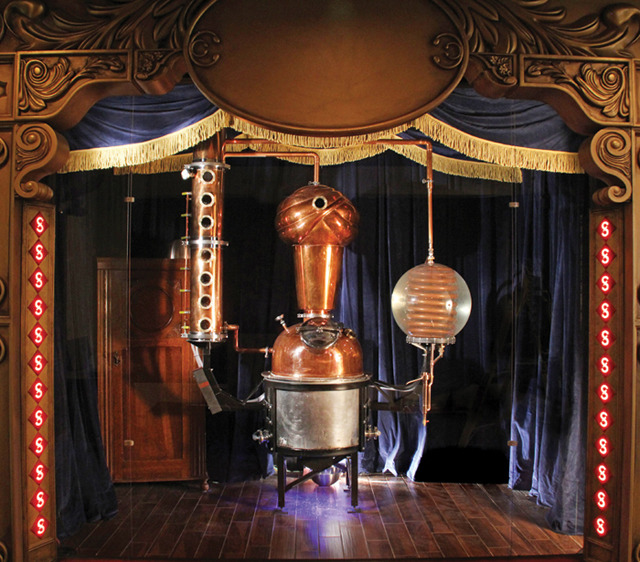 Deeply tied to Kentucky’s bourbon-rich history — and now a member of the Kentucky Bourbon Trail Craft Tour — Newport’s New Riff seeks not to reinvent the process of distilling spirits, but to craft their own take on tradition. Founded in 2014 and located adjacent to the Party Source, their column still produces a dozen 53-gallon barrels of Kentucky whiskey a day. Some of that will become bourbon — crafted from non-GMO family-farm-raised corn and aged for at least four years (the first batch of New Riff bourbon won’t be available until at least next year) — or spicy rye whiskey. Other spirits, produced on a pot still, include Kentucky wild gin made with coriander, orris and angelica root, cinnamon, lemon, juniper berry and hints of goldenrod, Kentucky’s state flower; and New Riff’s bourbon-barreled Kentucky wild gin, with hints of vanilla, orange peel and woody spices. 24 Distillery Way, Newport, Ky., newriffdistilling.com

Micro-distillery Woodstone Creek makes some of the rarest booze in Cincinnati, producing small batches of 100 to 200 cases of wine, mead and spirits per year. With no production or bottling lines, automated equipment or employees (other than the owners Don and Linda Outterson), much of the production process mirrors that used prior to the Industrial Revolution. Woodstone crafts brandy, five-grain bourbon, single-malt whiskey, dry gin, vodka, honey liqueur, rum and bierschnaaps with a direct-fire pot still, distilling, aging and bottling each barrel individually. Apart from spirits, Woodstone’s wide variety of artisan mead and wines utilize Ohio grapes, which vary from dry to sweet, and local honey. Though small, the company is internationally recognized for their bourbon and vodka by the Beverage Testing Institute’s panel of judges. 4712 Vine St., Saint Bernard, woodstonecreek.com

With a name derived from the concept of being able to see visions of the future, Second Sight Spirits is a small distillery located in the thick of downtown Ludlow, Ky. Built by co-founders Rick Couch and Carus Waggoner, former Cirque de Soleil prop masters and engineers/booze pirates, Second Sight sets out to not only craft original, premium products but also to present them in an innovative way. Their bottled booze includes a range of rum and moonshine, with a label depicting distillery mascot The Swami (a traveling vaudeville entertainer who trafficked alcohol during Prohibition). Their unbarreled rum is luculent and handcrafted from molasses; the spiced rum includes hints of French oak, cherry, citrus peel and smoked green tea; and the bourbon-barreled rum is “exquisite white rum transmogrified by placing it into bourbon-saturated barrels.” The house line of small-batch Villa Hillbillies Moonshine comes in flavors including original, apple pie and fire jack. Mark your calendar: An 87-bottle run of aged dark rum will be released June 24 at the distillery, featuring Louisiana molasses and Caribbean yeast aged in a charred oak barrel. 301 B Elm St., Ludlow, Ky., secondsightspirits.com