Slated to open in September, the bar will feature a lush outdoor garden, greenhouse bar, double-decker food bus by Mazunte, outdoor cinema projector and unique decor from around the globe. 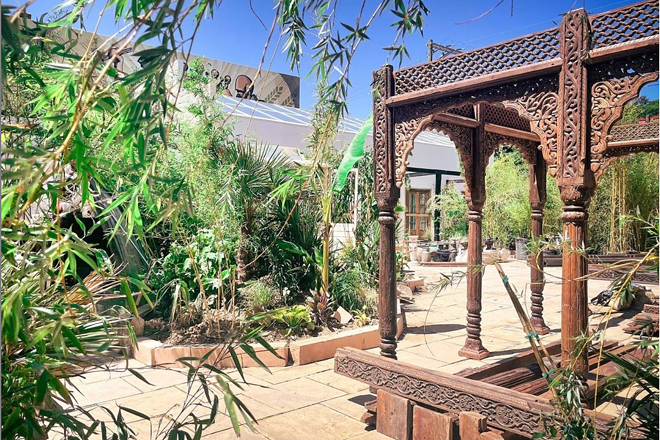 Photo: Instagram/somerset.otr
Sneak peek of the garden at Somerset

Something extraordinary is growing roots in Over-the-Rhine, but if you're not looking for it, you just might miss it.

Tucked away at 139 E. McMicken Ave., a sprawling new drinking and dining destination will soon open its doors, offering an immersive escape from the hustle and bustle of the city.

See a sneak peek inside the space here.

Somerset, slated to open in September, will feature two bar spaces — one in the plant-filled and glass-roofed conservatory and another in the cozy lounge space. The grounds will also be home to a double-decker London tour bus that has been converted into a kitchen (with a rooftop seating area); and, the pièce de résistance, Somerset's awe-inspiring garden space, loaded with tropical plants, unique seating nooks and imported pieces from co-founder and creative lead James Fisher's collection, as well as the collections of his friends and family.

Fisher, the visionary behind Somerset, was inspired by a destination — also called Somerset — his family would visit on childhood vacations while living in England.

"It’s a weird place with druids, huge solstice celebrations, Glastonbury Festival (our Burning Man) and all kinds of general monkey business. We usually went on long trips to Africa or the Middle East, but when we had less time and needed to get away somewhere a little closer to home, it was always Somerset," Fisher tells CityBeat via email.

"We want our Somerset to be that for our guests; a place that’s just on your doorstep, where you can go to recharge and feel like you are somewhere far away, even if just for a little while."

To create something so extravagant is no small task, and requires a dedicated team. Along with Fisher — a lifelong collector, traveler and also the co-founder of locally spawned travel app Roadtrippers — the ownership is split between Tatiana Parent (also a co-founder of Roadtrippers), Lauren Moore, Charlie Rittgers and Tony Alexander.

Fisher teamed up with the former management team behind Over-the-Rhine's Neons, Jeremy Moore and Sara Hutslar. Moore, who is a partner behind Liberty's Bar & Bottle and The Pony, is Somerset's chief operating officer, and Hutslar is the bar's general manager.

Grafton Wiley, a familiar face around the area for his former head of security roles around town, will also join the management group, Fisher tells CityBeat.

Somerset will be split between four main spaces — the courtyard, bar, lounge and garden area.

Guests will enter the courtyard through utterly massive and ornate over-170-year-old gates imported from India.

"They were used to defend a small town in Uttar Pradesh against light raids, and have all this interesting Islamic geometry on the front from when Persian architecture was prized in India during the Mughal Empire, so they are a real fusion of cultures — which is a common thread for us," Fisher says.

The courtyard will house Somerset's double-decker food bus, which will be helmed by local Mazunte Tacos. Fisher says Mazunte will bring the special Mexican flair they're known for, along with a globe-trotting menu of street eats.

"I’m really excited about what they have put together for us; it’s tasty as hell and there’s some really interesting and innovative stuff going to be happening," Fisher says.

The first floor of the bus will serve food, and the upper deck will offer al fresco seating — which groups will be able to book privately. The courtyard will have seating as well.

Somerset's vibrant greenhouse will be stocked with cascading plants, lanterns, birdcages, a large circular bar and an additional floating bar in the back. Fisher says the bar program will focus on global spirits, infusions and cocktails, offering all the classics, but "each with a unique Somerset twist," and using herbs and garnishes grown right on the bar rooftop. The conservatory room will feature eight sandalwood doors which will remain open in the summer to promote an airy breeze.

Fisher says they've put consideration into the menu's pricing so that all members of the community can enjoy.

"One other point that is important to us is that we can become a neighborhood gathering spot for people from all walks of life to mix and have fun," he says. 'To support this and help ensure that everyone can enjoy the space, we are going to have drink options at all price points."

Somerset's bright and airy conservatory will be contrasted by the cozy lounge space, featuring sofas, rugs, a book-swap library and an open fireplace.

But if you've spent any time on the forthcoming bar's Instagram page (if you haven't, you should), you know magic happens in the garden oasis.

"The idea is to have all sorts of interesting areas of different sizes for all kinds of groups and vibes. We have two huge gazebos, a round area around a tree seat we pulled from an old manor in England, a Nepalese Mandap (wedding altar), which also acts as a platform for our outdoor cinema projector, and lots more," Fisher says.

"All of it is embedded into a jungle-like environment of exotic planting (or as exotic as Ohio winters will allow), and set on sandstone that we bought straight from the quarry on a trip to Rajasthan."

In addition to being a neighborhood food and drink hub and gathering space, Somerset also hopes to host local chef pop-ups and yoga sessions in the garden.

"We also intend to offer the garden space for free on weekdays to any community focused organizations who need space for events and meetups. We’ll have a booking form on our website (coming soon) for that," Fisher says.

A grand opening date has not yet been announced, but stay up-to-date with announcements by following Somerset's Instagram page.

Somerset will be located at 139 E. McMicken Ave. in Over-the-Rhine.