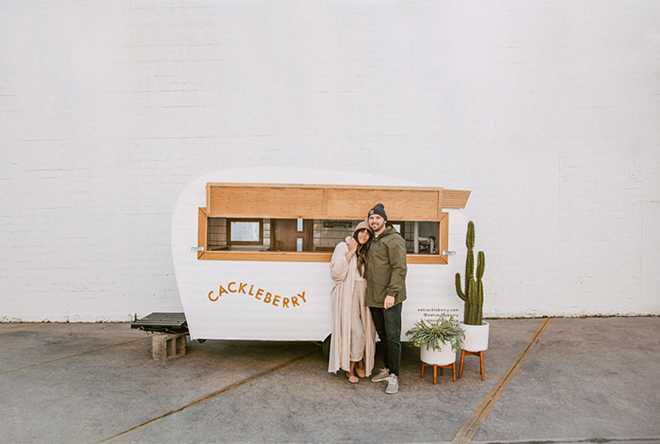 Squeezed into a bite-sized vintage trailer, husband-and-wife duo Nate and China Kautz are serving up mobile breakfast sandwiches as the owners of the new Cincinnati-based pop-up Cackleberry.

Cackleberry currently offers six unique sandwiches ranging from Cincinnati staples to Filipino-fusion cuisine. The food truck opens every Sunday at 9 a.m. — primarily parking in various locations throughout Walnut Hills — and operates until all sandwiches are sold.

China is the primary cook; Nate manages the ordering system. China tells CityBeat that this shop has been seven years in the making from her initial idea to the fully-formed business model it is today.

China previously worked in a cafe, which is where she was first drawn to breakfast.

“One thing that I really loved creating (in the cafe) was breakfast because we did serve breakfast and lunch. I think I just loved being able to get a different egg sandwich out the door really quickly,” she says. “I feel like eggs are such a versatile ingredient. You really can do so much with such a simple, versatile thing as an egg.” 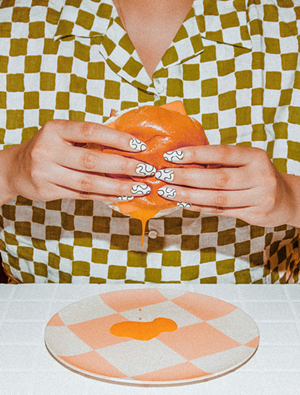 And that's where Cackleberry got its name: it's a whimsical term for a hen’s egg.

Since China didn’t want to lease a space for a brand new business, the idea of the shop lingered in her mind until she stumbled upon a rundown, 1968 trailer on Craigslist. When she and her husband went to see it, it was in disrepair with bright flames spray-painted on the sides. But China saw potential.

After revamping the trailer, she and Nate now “dance” around each other in the 11-foot-by-7-foot space. Moving around in the trailer is still a work-in-progress — at Cackleberry’s grand opening last Sunday, disaster struck during their first-ever order.

“We had our first order come through and I made the sandwiches. Then, I was bending over to get something out of our fridge and my husband turned with both of our sandwiches to put out the service window, and I bumped him,” China says. “The first sandwich just flew out the window and onto the floor.”

But that didn’t deter any customers. Within three hours of opening, Cackleberry sold out.

Their menu offers traditional breakfast sandwiches with a twist as well as unique dishes. Cackleberry’s "Benny" bacon sandwich has chipotle ketchup and caramelized onions, and the shop also offers a Cincinnati-inspired goetta sandwich called the "Porter." Nearly every sandwich is named after their dogs to add another level of personalization. 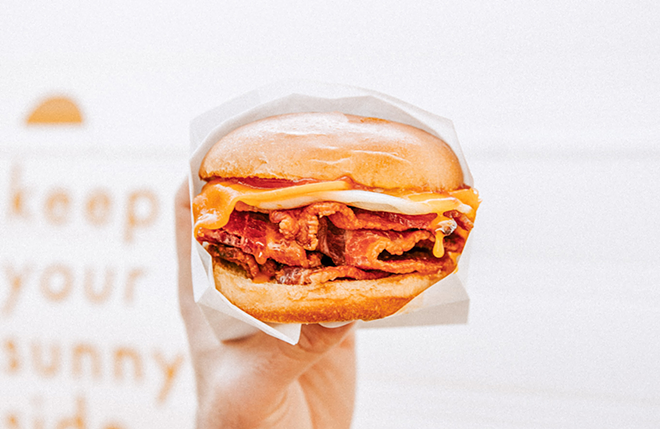 The “Lolo” sandwich, named for her grandfather, has a Filipino longganisa (sweet sausage) paired with achara (a relish or coleslaw) over a medium egg and garlic aioli; it, like all of Cackleberry’s sandwiches, is served on a brioche bun.

Though it is a mobile shop, China says she wanted people’s experience with Cackleberry to be memorable, so they play music near the truck and sell merchandise, including T-shirts and ceramic egg cups.

“I didn't want our food truck to just be something that you just walk up to and like, ‘OK, here's the food.’ I wanted it to be more of an experience for people,” she says.

Cackleberry was originally slated to open last year but, due to the pandemic, the opening was postponed until this April. However, launching a pop-up eatery at this time has had its advantages, according to China.

“I think, with how restaurants are transitioning right now with more takeout, I kind of see it as like a little blessing that we did open a food truck instead of a restaurant,” she says.

According to China, she also hopes Cackleberry will be used as a resource and partner to other local businesses, specifically in Walnut Hills.

“My goal was to, since we are mobile, work with other local businesses in the area. We could park out front of their shops and get more foot traffic to those other small businesses interested in supporting one another," she says. "We live in Walnut Hills, and we've seen growth of this area for the past few years that we've lived here and I just thought it was important to at least be here for some weekends just so we can start to bring more people to this area."