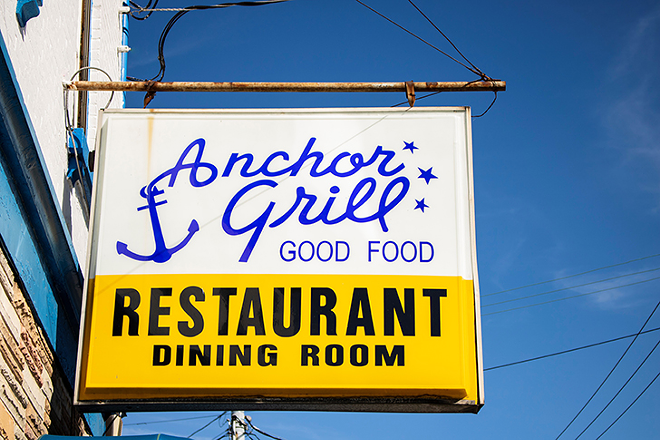 That's right: Mentioned among bites from all over the states, from New York City to Los Angeles to Austin, Texas, and across the globe, from Tokyo to Şirince, Turkey and Copenhagen, is the Anchor Grill's G.L.T. (goetta, lettuce, tomato). She writes that the diner is "alluringly grimy" and has been open "twenty-four hours a day, seven days a week, since (as far as I am aware) the beginning of time." Both of which are apt descriptions. Also fitting? She says that she encountered the Lynchian-esque diner in a hungover stupor.

Rosner mentions the restaurant under the subheading "some really excellent sandwiches," where she writes that, "of the hundred-ish bites and meals that stand out...nearly a quarter belong to the category of Stuff Between Bread." Other sammies she lauded include a roll stacked with mortadella at a market in Sao Paulo, a fried shrimp in a po'boy at Domillise's in New Orleans and a "massive" B.L.T at Los Angeles' Sqirl.

The hole-in-the-wall diner serves up grub backdropped by a cozy atmosphere, complete with knick-knacks and an animatronic Jazz band. Stick a few quarters in the Anchor's Jukebox and watch 'em play well into the witching hour. Wood-paneled walls and vinyl-covered booths give the locale a distinct 1970s vibe.

If you told me that it served as the setting of the Twilight Zone episode "Nick of Time", in which a newlywed couple — the hubby is played by William Shatner — mosey into a diner in Ohio after their car breaks down, only to become fixated on a fortune teller machine at their table, well, I'd believe you. (Note: It wasn't, but certainly has that lost-in-time feel.) Not only are they known for their goetta (the Glier's Goetta factory is right across the street!), but they also serve up classic grub like burgers, omelets, chili and more.

In the spirit of a new year, here's a toast to the Anchor Grill, the place that — according to its glowing neon sign — "may doze, but (they) never close."