The eatery will sell classic and clever bagel and cream cheese varieties at its storefront like poppy seed, onion and carrot cake. 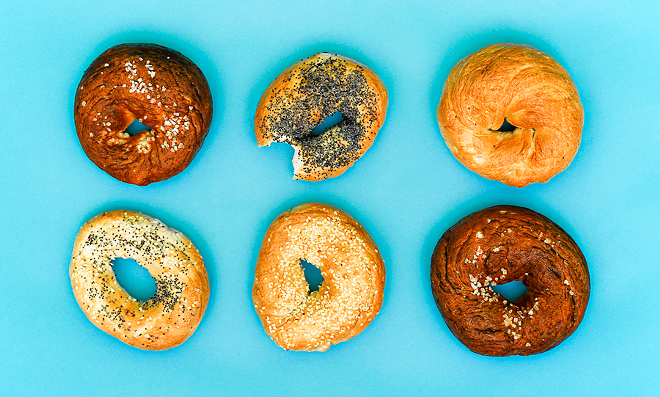 Business partners Marshall Mann and Chris Cavallaro started tossing around the idea of opening a quality bagel shop in 2016, inspired in part by Mann’s recent return to Cincinnati from the bagel mecca that is New York City.

The pair cites national corporate chains like Bruegger’s and Panera as some of the only outlets available locally for folks to regularly get their bagel fix, but when the former’s Clifton location temporarily closed in 2016 due to a fire, the pair saw an opportunity.

“Marshall works at the Moerlein taproom, makes the food there, and I would occasionally bartend on weekends, and for almost a month or two I would bring in Bruegger’s bagels,” Cavallaro says. “And then one weekend, (Bruegger’s) caught on fire and I was like, ‘Shit. There’s no good bagels anymore!’ ”

So the two started joking around about opening their own bagel shop.

“(Chris was) joking around; I was serious,” Mann says.

Mann decided to test out some bagel recipes, bringing them to the taproom for friends to try. “Every Saturday at the taproom for the last two, three months, I’ve been making bagels, just practicing, giving them out to employees or friends, a lot of the tour guides,” he says.

They were a hit.

He was “doing all this crazy stuff,” he says, exploring different flavor combinations including cookie dough cream cheese, marshmallow fluff cream cheese for a s’mores-esque bagel with graham cracker crumbs and a sauerkraut cream cheese with chicken schnitzel.

“That one’s definitely going to be on the menu,” Mann says.

After the positive response, Cavallaro and Mann began to build out the idea for a bagel shop in earnest, scouting locations through friends and eventually landing on 107 W. Elder St., the former Daisy Mae’s Market in Findlay Market. They were connected with Barry Cooper, proprietor of the now-closed storefront and owner of the building.

“I think it took a couple months to convince Barry,” Cavallaro says with a chuckle. But the pair finally succeeded and began renovations in June, adding a new restroom and doing cosmetic tweaks. The current timeline has them opening in mid-October, but things can always change.

“It’s good timing to be down here,” Mann says. “We looked at other places, we looked at places downtown, deeper OTR, but we both have ties to (Findlay Market).”

Mann is a graduate of the School for Creative and Performing Arts and lived in Over-the-Rhine for a number of years. He did a brief stint at Cincinnati State’s Midwest Culinary Institute before moving to New York City to pursue a career in art.

Cavallaro, too, lived in OTR for awhile and worked at the Moerlein taproom and with the OTR Brewery District for nearly three years. While there, he oversaw operations at Findlay Market’s Biergarten.

“I think not only at the market but in Cincinnati in general, ‘bagel’ is missing from the landscape,” says Joe Hansbauer, Findlay Market president and CEO. “We’ve got a couple of national players that are here that are making reasonably good bagels, but no one that’s really making something really unique and really good.”

There is Lil’s Bagels, a local New York-style bagel operation that provides bagels to the likes of Carabello Coffee, Point Perk and Hotel Covington, but it doesn’t have a standalone storefront.

While they complete work on the OTR Bagel Bar storefront, Cavallaro and Mann are baking out of the nearby Findlay Kitchen’s full-service, food department-certified incubator. It takes about a half hour for one bagel to come to fruition, says Cavallaro.

A tentative lineup of 10 standard bagels — such as poppy seed, onion, everything and plain — and specialty bagels like carrot cake will grace the menu. They will also be making specialty cream cheeses, like jalapeño and cookie dough, and bagel breakfast sandwiches.

“Five dollars gets you a good bagel, cream cheese and a coffee,” Cavallaro says.

Plans for deli-meat lunch sandwiches are in the works, too. They’ll be sourcing many ingredients from Findlay Market, smoking their own salmon and making their own roast beef and falafel patties. For goetta lovers, the bagel bar will offer goetta from Eckerlin Meats. They’ll also carry a processed meat product called Taylor Ham or Taylor Pork Roll, something wildly popular in New Jersey.

Cavallaro and Mann have their sights set on potentially keeping the store open at night, attaining a liquor license and positioning the OTR Bagel Bar as a late-night destination. For now, they will operate on Findlay Market hours.

OTR Bagel Bar takes its decorative cue and overall ambiance from what Cavallaro calls a “nostalgic” stance. The tables will have gameboard tops — ’80s board games will be present to play — and colorful chairs have been sourced from elementary schools. The wall space will serve as a rotating gallery to showcase urban and street art, a nod to Mann’s art school days.

“We’re trying to have fun with the idea and not be too stuffy of an atmosphere,” Cavallaro says. “What we’ve been trying to do is almost like an alternative version of a place — late ’80s, early ’90s, when MTV was cool.”

Their logo is a riff on the old MTV logo, with a bagel in place of the “M.”

“I’ve been involved in OTR for a long time, off and on, and I’ve seen a lot of change. (There can be a feeling that) not everybody belongs or feels comfortable walking into some of these newer places,” he says. “That’s not what I want the bagel place to be. I want it to be a place where everybody from any background can go in and sit down and hang out have a good time.

“This is a community place. We’re at Findlay Market and it’s been there for 150 years or so. Everybody’s welcome.”