Frédéric Maniet is committed to dishing up French food for everyone in Mt. Adams. 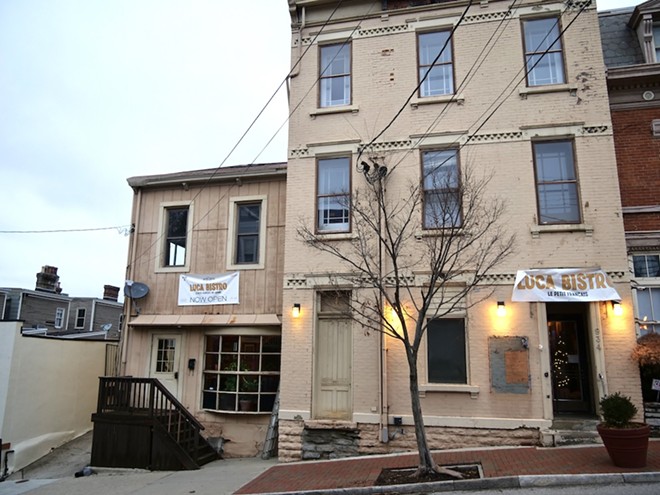 Simple and French cuisine make up the unlikely duo at the newly opened Luca Bistro in Mt. Adams. Many times in the United States, French cuisine is considered a fancy option, but chef Frédéric Maniet is on a mission to change that in Cincinnati.

Maniet grew up in the south of France and always wanted to become a chef.

“That’s what I did my whole life,” he tells CityBeat. “It’s a passion of mine.”

At 16 years old, he started tagging along and helping his brother on weekends at his restaurant job, Maniet says. Years later, he graduated from culinary school in Avignon, France.

Maniet says he came to Cincinnati more than 20 years ago on what started out as an extended, adventurous trip to America.

“I traveled with my backpack and just wanted to visit America,” Maniet says, adding that during this trip, he met his wife, and they eventually married and had children. “One thing led to another, and I stayed in America.”

The family moved back to France in 2007, eventually returning to Cincinnati three years later.

“I love America; it’s one of the greatest moves I’ve ever done,” Maniet says.

Throughout his time in Cincinnati, Maniet worked as a chef for private clubs, including the Queen City Club and the University Club of Cincinnati, often making what he describes as “fancy” French food. But this wasn’t his end goal.

“It always was a dream of mine to open a restaurant,” Maniet says.

Around 2021, things in Maniet’s world started shifting, allowing him to switch gears in his professional life. His children were becoming more independent, with one starting college and the other a year away from graduating high school, and his wife was recently promoted at work. With all of this, he knew it was the right time to start the next phase of his life: opening his own restaurant. Thanks to a friend of a friend, Maniet found Luca’s home in the former Daveed’s restaurant space in the hills of Mt. Adams.

With over 30 years in the restaurant industry as a chef and 15 of those being an executive chef, Maniet was ready to become a restaurant owner. After finding the right spot for Luca, he spent the next 11 months managing the renovations and decorating of the space with help from family and friends. “I wanted to make sure the space represents what I was looking for; that’s why I did everything — construction and decoration,” says Maniet. After almost a year of renovating, painting and decorating the space, Maniet officially opened Luca Bistro on Oct. 14. 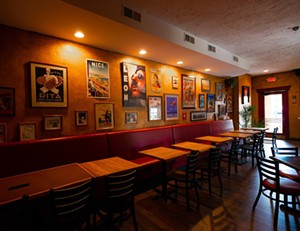 “My motto is French food for everybody,” Maniet says.

Luca Bistro is a casual space where patrons are meant to come often instead of annually, Maniet says.

“I want to see you come three times a week here rather than once a year on your anniversary,” he says.

Maniet says he always knew he wanted to show the simplicity of French food and let the flavors speak for themselves.

“When I did the country clubs, I was doing the fancy French foods and all those little things,” he says. “In today’s society, you can go to a food truck and, for $5, get one of the best tacos you’ve ever had. It’s a simple French bistro like we have back home in France.”

Luca Bistro offers a set menu for diners for brunch, lunch and dinner at a price that is more modest than what often is expected at French restaurants. The menu is filled with cozy, flavorful and laid-back dishes that Maniet says are common in French foods.

“If you go to France, it’s not fancy,” Maniet says. “It’s chicken and fries, you know. It’s always very simple, and that’s exactly what this is here.”

Maniet says he has been in the United States long enough to know he can’t always make food precisely as they do in France, since American palettes are different. He bases all of his dishes on French recipes with slight alterations when needed.

“I’ve been here for so long, so I kinda know the taste and tweak a little bit,” he says. “Everything is French I put on [the menu].” 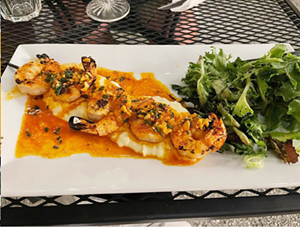 The breakfast menu offers familiar favorites like cheese, meat and vegetable omelets along with eggs benedict and pain au chocolat. Diners also can enjoy sipping on café drinks, including a regular café or café au lait, or even an Americano or orange juice.

For lunch, the menu changes to include salads and sandwiches, like a classic Niçoise salad topped with tuna steak and Dijon dressing and a mouthwatering croque monsieur layered with delicious gruyère and béchamel cheeses. The lunch menu also features a pan-seared salmon with an herb cream sauce. For those who are fans of mussels, there are the moules-frites that combine savory steamed mussels, white wine and frites for a robust dish.

The dinner menu is similar to the lunch offerings with a few more options, including starters like a charcuterie board filled with French cheeses and tasty meats and basil Boursin crostinis piled high with irresistible Boursin cheese spread. And then there are the sides, with frites, ratatouille and cauliflower gratin waiting to complement the main dish, plus decadent dessert options such as chocolate mousse and orange crème brûlée that can be enjoyed during lunch or dinner.

Diners also can order an assortment of French table wines, including various reds, whites and rose choices, along with beers and cocktails.

Maniet says that so far, he has been overwhelmed by the warm welcoming and excitement Luca Bistro has experienced from Mt. Adams.

“The support of the Mt. Adams community is unbelievable,” Maniet says. “What Mt Adams went through the past two to five years was really hard on them. A lot of the restaurants closed, and college kids went to Over-the-Rhine… Most of the locals say, ‘Thank you so much for opening a restaurant here.’”

As Luca Bistro grows its staff, Maniet hopes to keep expanding the menu and adding fresh, daily specials. For now, he’s excited to be part of Mt. Adams, introducing the Cincinnati area to a new way to dine French.

“The best advice, I always said: keep it simple,” Maniet says. “If you keep it simple, it’s going to be good, and that’s what this is. I keep it simple and straightforward, and the response has been extremely overwhelming.”