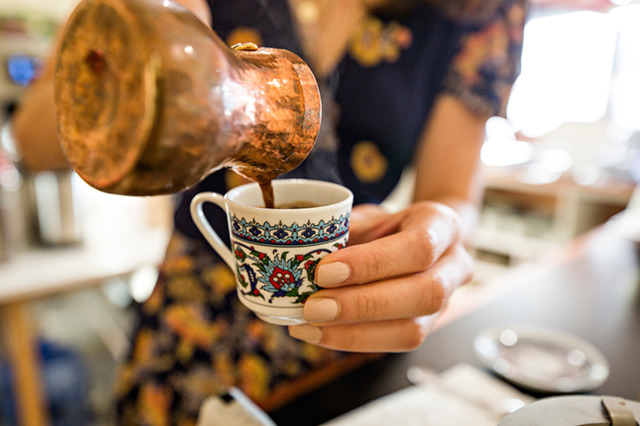 The collaboration celebrates the strong immigrant women in the Cincinnati community by offering a taste of each of the owners' home countries and a connection through coffee.

"Cup by cup, conversation by conversation, we both work to change the immigrant narrative in America with storytelling and cultural coffee experiences," says Rüya owner Melis Aydogan in an email.

The event will be led by both Alejandra Flores of Unataza and Aydogan of Rüya, as well as Aydogan's mother, Ayse, who was the inspiration behind her business.

Tickets cost $30 and include Turkish coffee, fortune telling from coffee grounds (a 500-year-old Turkish tradition) and a pastry.

Flores opened Unataza Coffee as a way to bring together two of the places she loves most: her new home in Northern Kentucky, and her native country of Honduras, which she moved from in 2010. After noticing the Cincinnati area's increasing interest in coffee, and Honduras emerging as a leading coffee producer, the connection was made. She began facilitating coffee origin trips to Honduras and eventually, after several years as a coffee pop-up, Flores opened up a brick-and-mortar in Dayton, Kentucky in 2019.

Aydogan's parents moved to the United States 27 years ago from Istanbul to pursue a better life for their children.

"I grew up watching my parents always seeking a connection to the home they chose to leave behind for me and my brother. I remember when I was a kid, Mama decided to get a job at Panera, because the fresh bread reminded her of the small bakeries in Turkey. Baba worked night and day to afford to send Mama, my brother and me back to Turkey for the summer to work on our family's hazelnut farm in hopes of instilling in his children the values of Turkish culture and traditions," Aydogan says.

Creating Rüya was a way to say thank you to her parents for all that they sacrificed and to create a place for immigrants, first-generations and locals members of the community to feel at home.

"I want Rüya to be a positive voice for all immigrants here in America," she says.

Aydogan's mother will be serving Turkish coffee and providing fortune tellings at the event.

"Through her act of preserving this tradition, she is a living symbol that gives meaning — identity, continuity, memory, and inspiration — to our lives," Aydogan says.