Chef Hideki Harada is back with a new Kiki test kitchen 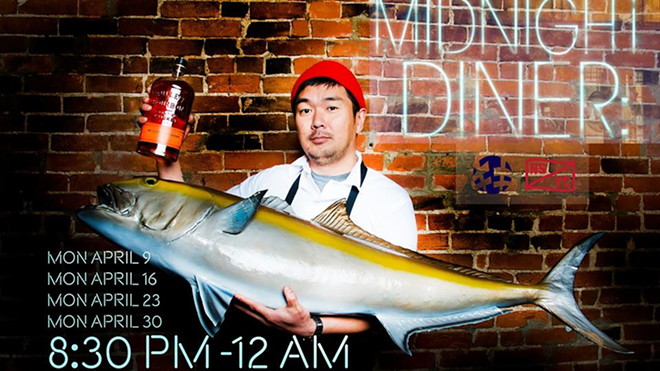 After the success of this winter’s ramen night pop-up, chef Hideki Harada is back at the Northside Yacht Club with a new weekly concept: the Monday Midnight Diner Series, running 8:30 p.m. until midnight (or later) each Monday in April.

Harada, former co-owner and chef at Kaze OTR, and his wife Yuko are slated to open Japanese gastropub Kiki in College Hill this summer and have been using these pop-ups as a way to test potential menu items.

Yuko’s donuts, with potato, carrot and onion, are considered a cult favorite — a dish Harada and Yuko have been serving since the second year of Asian Food Fest.

“We’re definitely serving those at Kiki,” Harada says, “and the other items are sort of a test subject for what could be the menu.”

The potstickers, or gyoza, will have a vegetarian and meat option — currently pork and shiitake. “It’s kind of nailing down some of the logistics of it, tweak it here and there and see what really hits everybody’s palates the right way,” he says.

The entertainingly named JFC or karaage is an Asian fried chicken that uses a marinade of ginger, soy, garlic and sake to impart its flavor. It will be fried in potato starch (or a blend of potato and corn starch) and served with pickled plum salt; it is gluten free.

“It’s all in the marinade,” Harada says.

Finally, a dish some diners might not be familiar with is mazesoba or mazemen, a brothless ramen-style dish. “Soba means noodle,” says Harada. “Mazesboa is almost like a pasta, very much tossed in oil or fat — it’s not brothy (so) it’s more fitting for the spring and summer.”

The extreme popularity of Harada’s ramen pop-up at NSYC led to multiple extensions, not only in date — it was extended from the end of January through March — but also in time. “Initially, I think ramen night was from 4-7:30 p.m. or 8 p.m. and then I extended it until 9 p.m., so the same thing might happen (with this night). Adjustments will be made if the demand is there.”

The 65-seat Kiki will be located in a former bank at 5932 Hamilton Ave. in the College Hill business district and will have a liquor license. Right now, Harada says they are waiting on permits and the “politics of opening a restaurant.”

The Northside Yacht Club is located at 4227 Spring Grove Ave., Northside. More info about the Monday Midnight Diner Series can be found at facebook.com/northsideyachtclub. Find more info on Kiki at facebook.com/kikicollegehill.