Oakley Fish House, from the Team Behind Teak OTR, Offers a Menu of Fresh Seafood with Options for Landlubbers, too

As you would expect, the kitchen’s strengths are with the sea creatures. 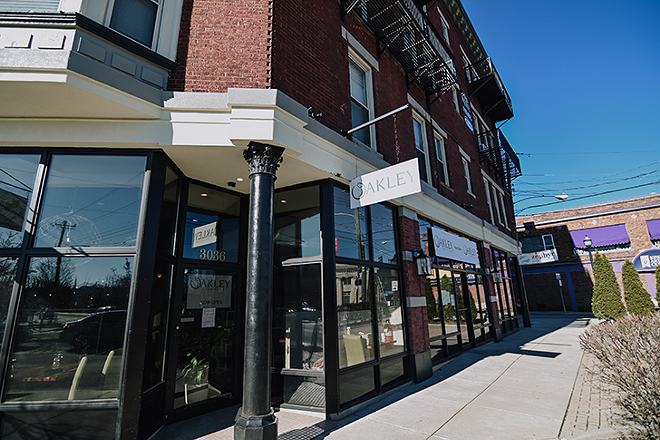 As we inch our way toward post-COVID (or at least post-vaccination) life, my thoughts keep returning to The Beatles tune, “Here Comes the Sun.” Yes, “it’s been a long, cold, lonely winter” and yes, “I feel that ice is slowly melting.” One of the most joyous signs that we’ve turned the corner back to normality has been the opportunity to eat in restaurants again without worrying that it might kill me. “Sun, sun, sun, here it comes.”

Even vaccinated, we have to be careful in indoor settings when others around us may not have protection from the virus. But what a relief it has been to return — masked and distanced — to a couple of favorite dining spots and to try some new ones that have opened since the pandemic started. It can’t have been an easy decision to start a restaurant amid so much uncertainty, and I salute those who have been courageous enough to do so.

The De Lanerolle family — Chanaka and his wife, Suron — actually opened two new places to eat during the annus horribilis of 2020: Teak OTR and Oakley Fish House. You can consider both of them as reboots of very similar establishments the family owned in Mount Adams (Teak Thai and the Mount Adams Fish House) that closed several years ago. One neighborhood’s loss has turned into gains for Over-the-Rhine and Oakley.

The Fish House’s new home occupies a spot near Oakley Square where the more casual Habit’s Café sat for several decades before closing late in 2019. The location should be a good one, considering the density of that part of town, the incipient end of our homebound isolation and what may soon be a surge in dining out. The sidewalk on Madison Road will give the new restaurant a spacious patio that will be ready to go within a few weeks.

Even before the weather had gotten warm enough for outdoor dining, the Fish House had steady business and “packed” weekends, according to a staffer I talked with. Just as the trees began flowering and the evenings lingered a little longer, my also-vaccinated friends and I went for dinner — early on a Tuesday, as we were still skittish about dining out before we reach the longed-for herd immunity.

I hadn’t been to Habit’s in years but could see that the two dining rooms had been spiffed up and redecorated. I noticed some nice touches around the bar, and especially in the restroom area, which had a bright, modern look. Plexiglas partitions — de rigueur in the Age of COVID — don’t beautify interiors, but I do appreciate their presence. The Fish House has plenty of them, and our cozy table had partitions on each side of us. While we were pretty much the first arrivals, by the time we left a couple hours later, the restaurant was about half full. Not at all bad for a Tuesday.

The menu includes what you would want in a seafood-oriented establishment, with a couple of landlubber offerings. Among entrees, there are two steaks ($29 for a flat iron with vegetables, and $38 for a filet with potato latkes and toasted garlic), a somewhat spicy Yucatan chicken achiote ($19) and a vegetarian choice ($17 for portobello parmesan). But, as you would expect, the kitchen’s strengths are with the sea creatures.

Our server recommended mussels ($14) and Ahi tuna ($16) among the six appetizers, but I wanted to try two seafood apps I gravitate toward when they’re offered: grilled octopus ($14) and fried oysters ($18). My friends agreed and we split those. The results were mixed, with the octopus being the best of the two. The meat was tender and cooked properly, and the plate was heaped with baby artichokes and lots of tasty olives. The oysters disappointed, however. The four shelled mollusks, while well-seasoned with Cajun butter and Tasso ham, were mushy instead of crunchy, and lacked the contrast between the salty, crisp exterior and briny insides that can make fried oysters such a wonderful taste sensation.

The Asian salad ($9), a generous serving that was easy for two to split, would be a good choice for anyone avoiding meat — in fact, it’s vegan. I thought it was one of the best dishes we sampled, in part because it had plenty of textural contrasts.  Based on a variety of fresh greens pulled together by a zippy ginger vinaigrette, the salad included a handful of well-seasoned, toasted cashews and — my favorite touch — a topping of tiny sweet potato crisps. I imagined how delicious this salad would be topped with grilled salmon filet and a little more of the vinaigrette.

We each selected a fish-based entrée: lobster ravioli ($22), pistachio and herb salmon ($28), crab-stuffed sole ($24) and Mediterranean fish stew ($29), which definitely covered almost all the seafood entrees. The standout was the sole, plated artfully with the fish wrapped in a circle around a mound of shellfish stuffing. The sole was browned, covered with a creamy caper sauce and sitting on a bed of nicely cooked, saffron-enriched risotto. 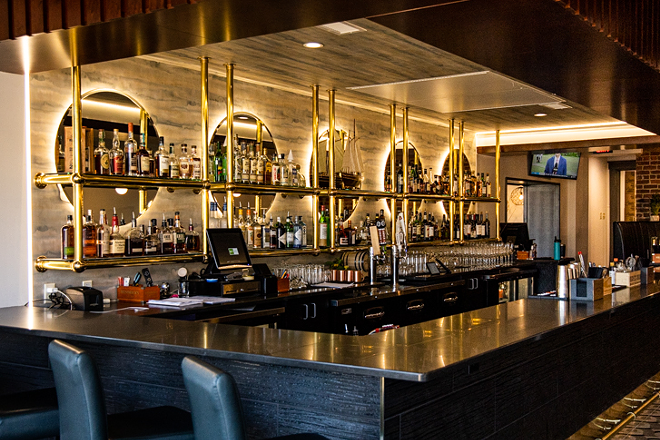 The fish stew had a hearty coconut milk-based broth and heaps of fish and shellfish. Tomato, onion, peppers, tahini and other flavors enhanced the broth. The menu listed couscous as an ingredient but it wasn’t evident in the bites I tried, or maybe it’s just the kind of grain that can get lost in such a rich dish.

The salmon had an herb-and-pistachio crust and more risotto, a fairly simple presentation. The ravioli didn’t do much for me — just a plate of creamy pasta with enough lobster to satisfy, but the dish struck me as one-dimensional. My friend, who had selected it as her main course, thought so too.

We weren’t drinking much that evening, but the sparkling, rosé and white wine options were well chosen for the seafood-heavy menu. The $10 cocktails covered all the major spirits, and beer lovers will find plenty of bottled and canned brews along with a half-dozen on tap.

All in all, Oakley Fish House promises to be a worthy addition to the east side of Cincinnati.