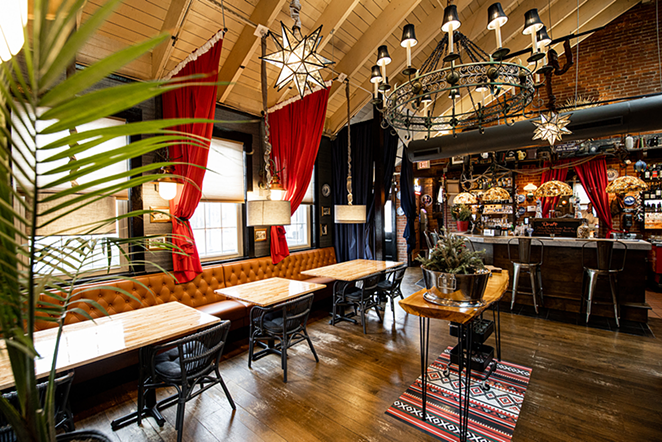 I experienced a jumble of emotions when I noticed the “now open” signage on a familiar brick building along Madison Road in O’Bryonville: happiness and relief that the space had been revitalized, mixed with trepidation that yet another set of hopeful restaurateurs was taking a chance on a location that I’d come to think of as the place where good restaurants go to die.

Extreme as that may sound, the address — 2038 Madison Road — has proven untenable for at least two pretty wonderful establishments: Enoteca Emilia and Eighth & English. Will this new venture, Pampas, described as an Argentine gastropub and owned by Ignite Entertainment, find a formula for success that has eluded others?

It could be helpful that the new owners have purchased the building instead of leasing it and have created a fascinating space with so much to look at on the walls, counters, stairways and cubby holes. They’ve also acquired the property next door that has gone through a few restaurant iterations of its own.

Another hopeful factor is experience in the Cincinnati restaurant market. Among other local dining and drinking establishments, Ignite Entertainment is the parent company of downtown’s Butcher and Barrel and Over-the-Rhine’s Che — both with menus that emphasize traditional, meat-oriented Argentine cuisine — and now Pampas, which brings this style of cooking to a slightly more suburban neighborhood.

There are distinctions among the three Ignite restaurants that go beyond location, though. Che is the most casual, focusing on a variety of empanadas. The more upscale Butcher and Barrel features grilled meats in a style called parrillada, which mixes several different meats in one serving.

Pampas, the newest restaurant, draws on Ignite Entertainment owner Juan Imeroni’s interactions with farmers and gauchos — those whom we might call cowboys — during the summers he spent at his grandfather’s home in the grass and farmlands, or pampas, of Argentina. Here the food is more rustic.

Pampas has a short menu, with three appetizers (plus a charcuterie option), two salads, four entrees and a soup. Because Argentine food tends to be meat-oriented, vegetarians will find very few options here. You can at least avoid red meat at Pampas, if you are so inclined, but then you’d miss what the cuisine — and this restaurant — does best. 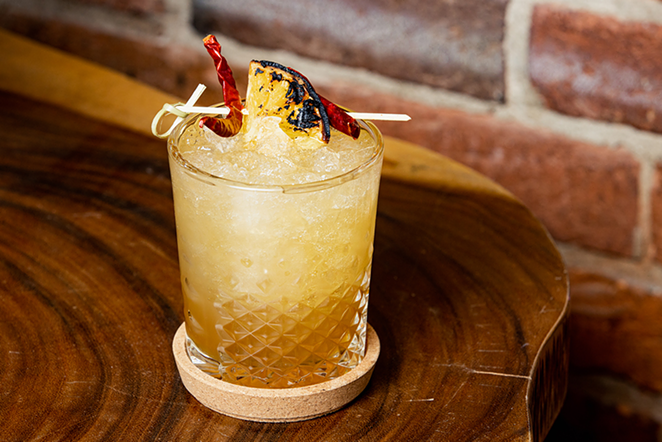 While you decide, you might want to enjoy one of the seven house cocktails. El Gaucho Del Camino ($14) starts with rye whiskey and mixes it with ancho chile liqueur, lime and simple syrup. The Blackberry Kentucky Mule ($12) — bourbon, ginger beer, blackberry simple and fresh lime served over crushed ice — was so delicious that my friend ordered them all through the meal and said he would come back again just for that drink. Other cocktails based on gin, Aperol, wine or vodka should please the non-whiskey drinker.

I’ve dined at Pampas twice and for the most part passed on the appetizers. But I did try — and like — Provoleta ($10), an uncomplicated dish of baked provolone cheese seasoned with fennel and chile. If you ask (we did), the team will bring toast crisps to go with the melty cheese. Another popular app, according to our server, is Pampas Fritas ($14), house fries all gussied up with smoked cheese curds, lamb gravy and chimichurri. There are mussels ($14) with bacon, anchovies and cream along with grilled bread; worth a try on a subsequent visit, I thought.

Both salads ($10 each) sounded appealing: pear and arugula or spinach and beets. They had terrific lists of additional ingredients, from crispy ham with whipped goat cheese and spiced pecans on the arugula to smoked grapes and grilled onions in the spinach salad.

Because there are only four items listed as main courses, you would expect each of them to be carefully assembled and represent the best the kitchen has to offer. But in our experience, just two lived up to that expectation. One of the hits was a burger, listed as Hamburguesa Wagyu ($18), crafted from high-end wagyu beef and enhanced by bacon, grilled onion, provolone and smoked garlic. It had a charcoal-grilled flavor that was quite appealing.

We also appreciated the dish called El Bife ($32), marinated skirt steak over house fries with a delightfully savory sauce based on mushrooms, chimichurri and housemade steak sauce. El Pollo ($26) featured roasted chunks of dark and white meat chicken with a mélange of vegetables that tended more toward starch than greens; unfortunately, the chicken came out overcooked. (When I mentioned that to the manager, she took the dish off our bill, a nice gesture.) 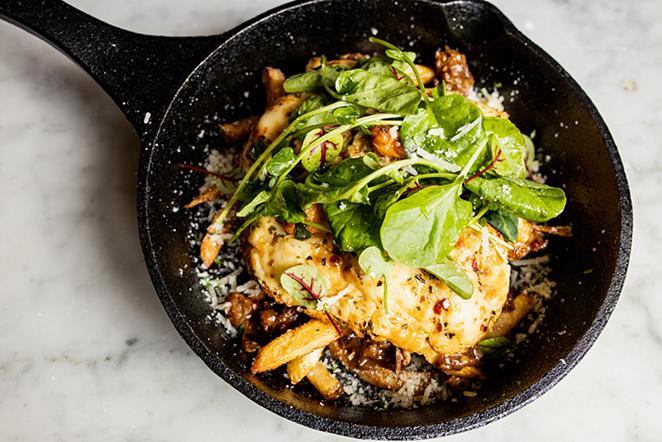 El Pescado ($26) sounded enticing: salmon over Israeli couscous with olives, piquillo peppers and vermouth beurre blanc. One of my companions ordered this dish each of the two times I was there, and each time it tasted bland.

Pampas has a decent wine list that brings a variety of Argentine wines to diners’ attention, including a couple by the glass. Two or three desserts are available most nights, and the menu descriptions attracted us to try Dulce de Leche Cheesecake as well as Torta de Chocolate Salado.

Given the tribulations that the restaurant industry is experiencing with staffing — both front of house and kitchen — I found the service here to be seamless, with just the right amount of attention and responsiveness to our requests.

Staffers say the restaurant group may be expanding again soon with still another Argentine-Italian concept. In the meantime, Chef Nicholas Hendrix will have his chance to keep the dining room filled at this pleasant and beautifully decorated space.