From book exchange cupboards throughout Greater Cincinnati to an inclusive gardening experience in Loveland, here are the stories you'll find in CityBeat's latest print edition. 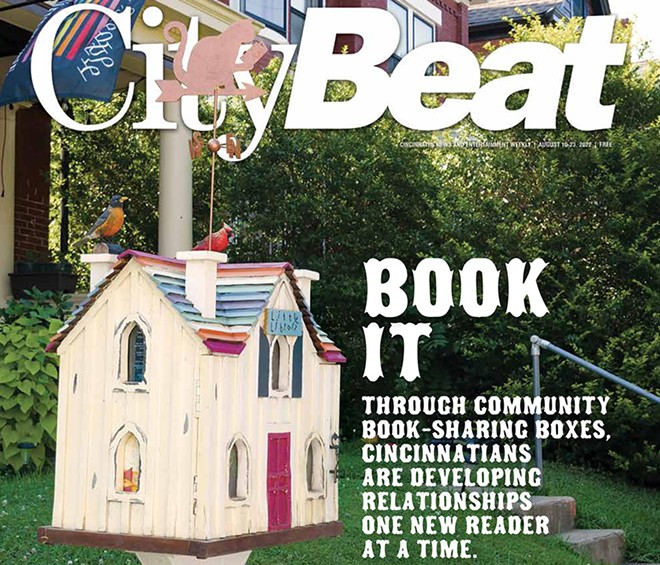 Photo: CityBeat
CityBeat's latest issue is out on newsstands now.

“Reading is fundamental,” countless teachers, cartoon characters and public service announcements told children in the 1980s and 1990s. But since then, the United States has gone through multiple recessions, there’s no time for relaxing due to the multiple jobs necessary to pay rent, and conversation frequently has been relegated to phone and laptop screens. Raising literacy rates – particularly during the last decade – became a focus for educators. One of the more interesting strategies deployed in Greater Cincinnati — and in other cities around the world — has been the installation of book exchange cupboards in which the motto "take a book, share a book" is king. In CityBeat's latest cover story, we share the stories behind some of our favorite book exchange cupboards in the Greater Cincinnati area. Keep reading to discover all of the stories you can find in our latest print issue, out on newsstands now.

Through Community Book-Sharing Boxes, Cincinnatians Are Developing Relationships One New Reader at a Time
By Allison Babka, Lauren Serge and Lindsay Wielonski
Originally launched in Wisconsin, Little Free Library is the most notable organization behind the “take-a-book, share-a-book” movement that has taken hold in Cincinnati and around the world. According to LFL’s website, there are more than 125,000 of its registered book exchange cupboards across the globe, with 42 million tomes traded each year. And these small book structures are multiplying throughout Greater Cincinnati in every neighborhood, with many as varied in their appearance as they are in the books they contain. Read CityBeat's story to check out some of our favorites from around town and learn about a few folks who are using them to build communities around books.

Local Man Creates Inclusive Gardening Experience in Loveland After Suffering Injury That Left Him Paralyzed
By Sean M. Peters
When Eric Boltz was struck by a car in 2017 while bicycling, the paralyzing injuries he sustained affected not only him but also his family. Along with his wife, Yvonne, Eric's quest for a wheelchair-accessible farmhouse began. Five years after the accident and after much healing, plenty of construction and a lot of innovating, the Boltz family now owns and operates Boltz to Nutz Farm, a wheelchair-accessible raised-bed market garden in Loveland. Now Boltz to Nutz Farm is moving into its next phase, which especially focuses on recently disabled folks. The couple soon will start offering adaptive cooking classes and retreats in a building at the farm to showcase the ways in which they’ve overcome Eric’s hurdles navigating life in his wheelchair and others can do the same. Read CityBeat's story to learn more about how Boltz to Nutz Farm is building an inclusive space for the community.

The Permanent Jewelry Trend Has Come to the Queen City, and LINK x LOU Is Leading the Way
By Maggy McDonel
At long last, the permanent jewelry trend has attached itself to Cincinnati. Queen City eastsider Lindsey Brafford started her permanent jewelry business in Cincinnati in June. This fast-moving trend – which loops jewelry like bracelets and necklaces around body parts forever – has become immensely popular, and in Brafford's short time of doing it in Cincinnati, her pop-ups have been selling out in 15 minutes. Read CityBeat's story to find out how to get permanently linked in Cincinnati.

Review: Ripple Wine Bar Brings Approachable Elegance to Covington
By CityBeat Dining Critic, Pama Mitchell
Tucked along a row of storefronts on Pike Street in Covington, Ripple Wine Bar has such an unassuming presence that you could easily miss it. CityBeat reviewer Pama Mitchell discovered it only last winter, and after a quick stop for wine and appetizers at the bar she became an instant fan. Recently, she returned with several friends to experience a full evening of the place’s food and drink. Read CityBeat's story to learn more about what makes Ripple Wine Bar a must-visit wine destination in the Queen City.

Rise Against's Long-Awaited Tour to Promote Latest Album is Worth the Drive to Cleveland
By Alan Sculley
Rise Against is set to play the Jacobs Pavilion at Nautica in Cleveland on Wednesday, Aug. 17. The band is headlining a package tour that also includes the Used and Senses Fail. For singer-guitarist Tim McIlrath and his bandmates, bassist Joe Principe, drummer Brandon Barnes and lead guitarist Zach Blair, the pandemic actually came at a rather opportune time. They had finished recording the 16 songs that make up their 2021 full-length album, Nowhere Generation, and their newly released companion EP, Nowhere Generation II. Normally, a new album would be followed by an extensive tour cycle, but the COVID-19 pandemic intervened. Read CityBeat's story to learn more about what to expect at Rise Against's upcoming Cleveland show.

Sound Advice: Sleigh Bells to Bring a Decade of Delightful Noise Pop to Taft Theatre
By Jason Gargano
Alexis Krauss and guitarist Derek Miller founded Sleigh Bells in Brooklyn, N.Y., in the late aughts as an alternative to neighborhood’s indie rock brethren — massive, hooky songs driven by Miller’s crunchy riffs, a booming drum machine and Krauss’ voice, a modest but cutting soprano. There’s a clean, almost surgical, element to the duo’s music — the synth stabs and snappy drums that open the band's latest album Texis’ first song “SWEET75” bring to mind the soundtrack to a glitchy video game. Read CityBeat's story to learn more about the band's latest album and what to expect at their Taft Theatre show.

Sound Advice: Built to Spill's '90s Indie-Rock Expertise Is Coming to Cincinnati's Woodward Theater
By Jason Gargano
Built to Spill endures, which should come as a surprise to no one. The Idaho-spawned act has exceeded most of its early-1990s indie-rock contemporaries behind a timeless sound centering on frontman Doug Martsch’s ragged guitar heroics, which recall Neil Young on a J. Mascis kick. And now, after years as a five-piece outfit, Built to Spill has pared back to a trio with drummer Teresa Cruces and bassist Melanie Radford for recent tours, including the current jaunt. Read CityBeat's story to find out what Built to Spill's setlist might be during their upcoming Cincinnati show.

Sound Advice: The Wallflowers Aim 'One Headlight' at Cincinnati's Ludlow Garage
By Brian Baker
If you think it's intimidating being compared to Bob Dylan, imagine being born with his face, voice and name. The sound of critics sharpening their knives was deafening in 1992 when Bob’s son, Jakob Dylan, released his eponymous debut album with the Wallflowers, but those critical knives were sheathed when Dylan’s band proved to be a jammy roots rock powerhouse and Dylan himself a compelling songwriter and frontman. Last year saw the release of the Wallflowers’ seventh album, the much-lauded Exit Wounds, but the tour joined the sad roll call of COVID postponements until 2022. Read CityBeat's story to learn more about what to expect at The Wallflowers' show at Ludlow Garage.