The eatery honors traditional recipes from across Latin America, with an emphasis on Venezuelan cuisine Maize, a new Over-the-Rhine eatery which opened in early July, specializes in a unique fusion menu that honors traditional recipes from across Latin America, with an emphasis on Venezuelan cuisine.

“It’s hard to find real dishes that actually originated in (Latin America) and are being served the way it’s supposed to be and honored the way it should be,” says Maize co-owner Louisa Reckman. She’s been in the restaurant business for more than 14 years, most recently as the owner of Queen City Radio. “I don’t think there are many restaurants that do that in Cincinnati, and I think that was missing — especially Venezuelan and Puerto Rican (offerings).”

Fellow co-owner Angel Batista is a native of Puerto Rico and, in his first foray into the restaurant business, is adamant about maintaining tradition. He grew up surrounded by various culinary influences, including Venezuelan fare. (Puerto Rico is due north of Venezuela, separated by the Caribbean Sea.)

“We do that by really keeping these recipes, the actual authenticity brought out by using a base of tradition,” he says. “The plating and way we’re bringing things to the table, everything is very traditional, not processed.”

The restaurant takes its name from maize, a corn flour dating back some 10,000 years and first utilized by indigenous Mexicans. The flour serves as the basis for the arepas, cachapas and empanadas served at Maize, and indeed, Batista looks at the stuff as the starting point for the restaurant’s whole concept. He calls it Maize’s “delivery system,” acting as an access point for the rich world of Latin American cuisine. 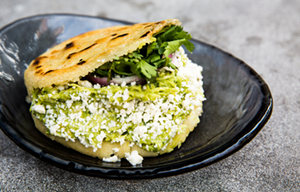 To that end, the menu is colorful and varied, with dishes from across the region that complement one another while retaining their traditional roots. Batista rattles off the geographically-assorted origins of such dishes as the Peruvian ceviche, Mexican street corn and Venezuelan cachapas and asado negro.

“There’s a lot of work that went into this concept,” he says. “How do we bridge things to make somebody for the first time trying things comfortable, and how do we also keep the traditional aspect that when a Peruvian walks in, they feel like we did justice to their dishes and their traditions?”

In addition to adhering to tried-and-true recipes (“From the beans to the pork to the chicken to the chicharrones, a lot of that stuff is straight from my mother,” Batista says), Maize utilizes high-quality ingredients. They source their meat from Eckerlin in Findlay Market and their produce comes from Lasita Joe & Sons, Inc. on Fourth Street. Maize’s executive chef, Curtis McGlone, brings his own insight as well, after stints at the Italian-Argentinian Alfio’s Buon Cibo and contemporary Southern Hotel Covington.

I stopped by on a Tuesday night with an 8 p.m. reservation, which I at first thought was merely a formality, but when I stepped inside the buzzing restaurant on Race and 14th streets, I was glad I had called ahead.

The bright blue accents of the restaurant lend to the tropical vibe, as do the multitude of rum options on the drink menu. With more than 30 rums in house, Batista and Reckman believe the spirit will be the next bourbon in terms of popularity and widespread, appreciative consumption. For appetizers, my friend ordered the ceviche ($9) and, on our server’s recommendation, I tried the guasacaca gruesa ($8), which is a chunky Venezuelan avocado dip, similar to guacamole, but prepared with olive brine for acidity instead of lime. I appreciated the saltiness, but I missed the bite of lime. Both were served with an unbelievable abundance of mariquitas, or plantain chips. We munched on airy yuca fries ($4), too — yuca is a potato-like tuber, with more inherent flavor and less guilt.

Allow me, briefly, to exalt the ceviche: it was perfect. Crisp, bright, tangy, fresh; it tasted like the ocean — as Batista says it should. The mahi, snapper and shrimp were plump and plentiful and the diced mango and serrano pepper (tossed in after the acidity of the lime cures the seafood) were complementary pops of flavor.

At the bottom of the glass lingered the leche de tigre, or “tiger milk,” which you can drink right out of the container. Batista and Reckman both say the tiger milk is considered an aphrodisiac. (I refrained from drinking it, so I can’t attest to this, but let us know.)

I also tried the ensalada jardinera — romaine with grape tomatoes, fire-roasted corn, queso fresco, carrots and serrano peppers — which was good, but definitely needed the kick from the crema de cilantro dressing served on the side. 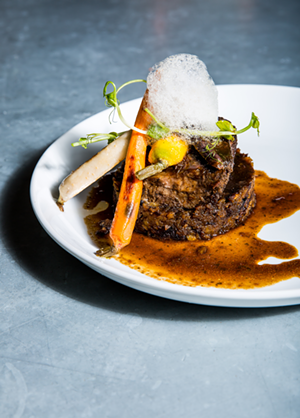 My pal ordered the asado negro de costilla de res ($22), which was just lovely. A true fusion dish, it’s a traditional Venezuelan braised short rib with a panela base (raw sugar that when caramelized has a natural barbecue flavor), served on top of Puerto Rican mofongo (plantains, sofritos and vegetable broth, mashed and seasoned) with heirloom carrots and a sorghum foam.

The traditional recipes married to authentic presentation was well-received by this diner, and Batista hopes everyone comes away with that feeling. Other restaurants in the city have opened the door to trying new cuisine — he and Reckman mention Salazar, Abigail Street and Please, among others — and they want to open it even further.

“We are not out there making changes to food and recipe in order for it to be OK and accepted by someone,” says Batista. “We’re trying to make sure there’s a bridge. It’s more about giving that food the respect it deserves.”

The team at Maize also has plans to roll out brunch and lunch soon.