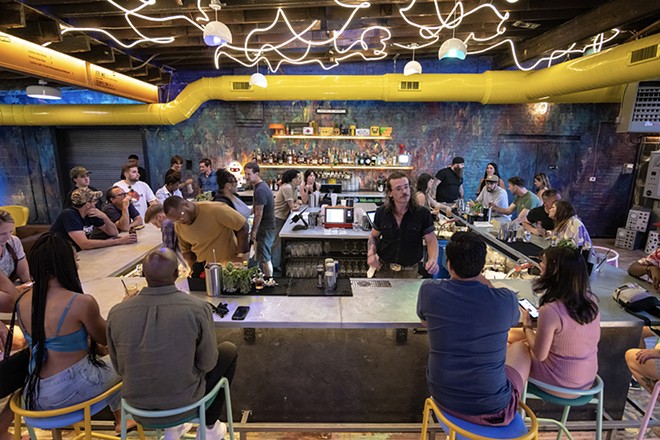 While Alice, a new bar in Over-the-Rhine, opened in late June, doesn’t take its name or inspiration from the one of Wonderland fame, the spot is just as charming and beguiling.

Located in an old garage-warehouse on the corner of East Liberty and Main streets, Alice stands apart from the other bar options in the area with colorful industrial vibes and clever cocktails.

“We opened Alice to bring a new experience to Cincinnati,” says Seth Maney, one of three partners in the building and business. “We wanted to bring these old empty buildings back to life for the love of the history, bringing an overlooked, but amazing, workshop to a public use.”

In 2018, Maney and his partners James Fisher (of Lost Hospitality and Somerset) and Joshua Smibert bought the building, formerly home to J.B. Schmitt Company from 1872 to 2012. The original plan had been to open the space in early 2020, but the COVID-19 pandemic halted the timeline. The group then took 2021 to build their vision.

Photo: Phil Armstrong
Alice is located in the former J.B. Schmitt Company space.
So why is it called Alice?

“It was a good contrast to the masculinity and the heaviness of an old world workshop from the 1870s,” Maney says. “It is about duality. If there’s a word that I could put with Alice, it would probably be the duality of the physical, the metaphysical, and your senses and your state of mind changing.”

Alice is a triptych of sorts: there’s the courtyard and patio, the indoor bar area and the disco room. The courtyard has a relaxing vibe accented by an art-light installation made from repurposed agricultural water tanks. The bar itself, a square concrete island in the middle of its room, makes people-watching, which still retains something of its pandemic rarified glow, easier than ever. Exposed beams and a huge yellow duct, neon squiggles and a marquee-esque menu enhance the night-club-in-late- '80s-Germany vibes.

Photo: Phil Armstrong
The hallway leading to the bathrooms
If a bathroom isn’t Instagrammable these days, did you even use it? Maney and crew enlisted a team of artists to transform each of the five bathrooms in Alice as they saw fit (one CityBeat favorite has a gobo projector and is excellent for selfies). The hallway leading to those bathrooms is a canvas, too — everything from the ceiling down is plastered in a retro collage of assorted magazine clippings, ephemera, show posters and nostalgia-inducing imagery.

“The general vibe of the place is sort of this retro-future thing. There’s a lot of old plastic vintage ephemera mixed with this concept of what the future could or would look like, sort of futuristic movies that are post-apocalyptic,” Maney says.

Seating inside of Alice is ample, with low couches and retro-cushioned seats. The open bar concept allows for good flow, a necessity in these semi-post-pandemic days.

General manager Rich Harwood (formerly of Japp’s and Neon’s), J.P. Mayer (who has led the beverage program at 21c) and Emily Patton are the beverage and bar leadership team.

There are six house cocktails, some pre-mixed standards, great wine options, and some fun non-alcoholic cocktails. Indeed, the cocktail menu reads like a greatest hits album of sorts, with names like Beet on the Brat, Ari Up, Death of a Clown, Dead Flowers, Smoke & Mirrors and Dinner Party.

Dead Flowers features bourbon, rose vermouth and cream sherry, served neat with a bit of lemon peel. The Ari Up is a super-fun and aesthetically pleasing, sexier version of a Long Island iced tea. The cocktail features a housemade cola and cardamom and looks like what Wednesday Addams would drink if she stopped by.

There are two house shots: the House Green Tea (which reads like an immunity booster, is crisp and full-flavored) and the Coffee Crisis.

Don’t sleep on the list of mocktails, or non-alcoholic cocktails, either. The Thicc Bitch is a spin on a strawberry shake, and if you’re in the mood to add some booze, rum renders it a cooler cousin to the pina colada.

Adjacent to the bar, the disco room is a huge black box-like space with a DJ and light booth upstairs, primed to pick up the dance-club mantle in a way no other bar has quite been able to do since the old Japp’s Annex days. The disco had its first real outing during the final weekend of Pride Month in June.

The Alice team enlists Brave Berlin to do projection mapping, art and light in the disco room, with DJs and dancing every Friday and Saturday night. The space also is available for private events and rentals.