Cinema, which was opened by local entrepreneur Rico Grant, is “dedicated to ’90s R&B, hip-hop and classic Black films.” 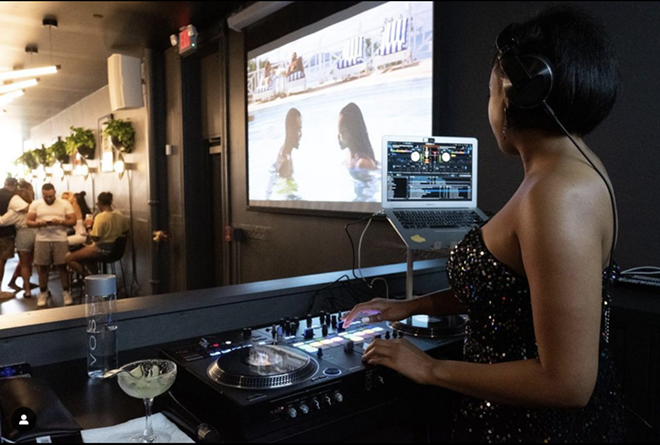 Over-the-Rhine has another new bar, this one is perfect for movie buffs and lovers of '90s hip-hop and R&B

Cinema, which was opened by local entrepreneur Rico Grant on Aug. 6, is “dedicated to '90s R&B, hip-hop and classic Black films,” per a release from 3CDC.

Guests enjoy DJ sets that feature '90s and early 2000s hip-hop and R&B while being “surrounded by Grant’s favorite Black films.” Grant, who is described as being “on a mission to strengthen and celebrate Black culture” hopes this place will be a spot to dance, relax and have a good time on the weekend.

“Cinema is very on brand with the market I serve – the young professional who is looking to stay in Cincinnati and grow and build here,” Grant said in the release.

The cocktail program offers drinks that fall into the movie theme and take on the names of characters from Grant’s favorite movies. Drinks include the Sister Mary Clearance (named after Whoopi Goldberg’s character in Sister Act) made with Casamigos, lemonade and cucumber plus the Sugar Ray (coming from Richard Prior in Harlem Nights) which features Titos, Baileys and coffee from blaCk Coffee.

“I don’t consume anything new. If it's not old, in my book, it's not good,” Grant said. “This spot is a place designed for fashion lovers, those who want to dance or ‘cut a rug’ as my grandmother would say.”

Grant isn’t just working on Cinema, he also has an organization called Paloozanoire which focuses on celebrating the Black community with fun events and art exhibits. He also recently started a grant program, Fundnoire, which uses a $1.5 million fund to provide grants to small Black-owned businesses.

“Rico has done so much for the community. His energy is infectious, and we’re thrilled to be a part of his newest endeavor,” development director with 3CDC Katie Westbrook said in a release. “As we work to increase the number of Black-owned businesses in Over-the-Rhine, his partnership has been invaluable. We look forward to our continued partnership and we’re especially excited to see this concept come to fruition at Perseverance.”

Another one of Grant’s ventures Gumbo opened in 2021. The space is “part traditional barbershop, part art gallery where topics of discussion include politics, community and pop culture.”

Cinema is the third business, behind Qlicious and Boutique Bellini, that has signed a lease within 3CDC’s $13.9 million Preservance project. The project, which is in collaboration with Over-the-Rhine Community Housing, focuses on renovating historic homes to create 32 affordable housing units and 6,700 square feet of commercial space.