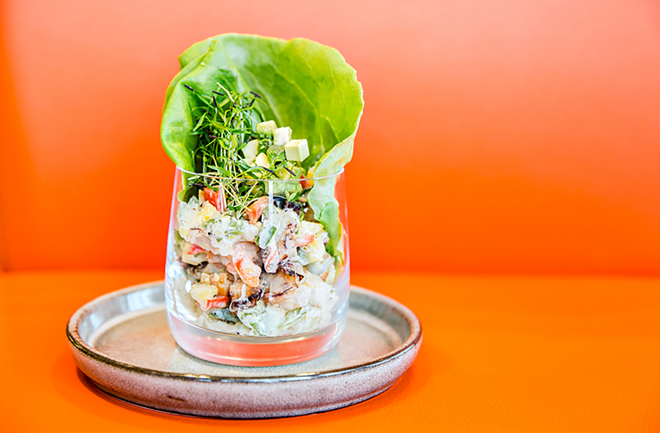 Foodies, take note: a lot of excellent food is coming out of the kitchen division of the new Overlook Kitchen + Bar at Madisonville’s The Summit hotel. But you’re going to have to put up with a significant disconnect between the high-level cooking and the garishly-lit, noisy, amateurishly staffed bar where you have to eat it.

I can’t remember ever having such a feeling at a restaurant. Six of us raved about the food while just tolerating the rest of the experience. I’m willing to forgive a lot if a place delivers good food, but I had a hard time drawing that conclusion here. And that’s really a shame because the food absolutely delights.

The fourth-floor dining facilities of The Summit, which include a separate space open only for breakfast and lunch, features a large patio that looks inviting. Unfortunately, it was raining the night we went and dining al fresco wasn’t an option. Instead, we had to find seating in a chaotic, rather cavernous bar area with a few tables and booths adjacent to the bar itself. The Friday after-work crowd seemed to be yelling at the top of their lungs as a server told us to “sit anywhere.”

That made me think of the “sit anywhere” lyric from a Beatles song, “Norwegian Wood,” where the next line is, “So I looked around and I noticed there wasn’t a chair.” Is there an actual dining room in this restaurant?

Not really, but we found a booth we could squeeze into as far from the bar racket as possible, then returned to a high-top bar table for a round of cocktails. That experience was a comedy of errors as our server carried only two drinks at a time to our table, with significant waits before the next arrivals, and couldn’t remember parts of our order. At least we liked the drinks, though, and some of the noisy patrons moved on and we could hear ourselves. Photo: Hailey Bollinger
The bar at The Summit

All this felt like a minor annoyance if only because we were happy to enjoy each other’s company. Drinks consumed, we settled into our booth and started the meal. Aside from additional mishaps of service, things went more smoothly the rest of the night, thanks in large part to the remarkably pleasant food.

Chef Kyle Goebel most recently was executive chef at Cooper’s Hawk, and also previously worked with chef Todd Kelly at Orchids. He’s now overseeing all the food service at The Summit and deserves attention and praise for the delightful fare he’s created for Overlook.

On our visit, my friends and I shared a few appetizers, the star of which was a shrimp cocktail-like presentation served chilled ($16). It was a surprisingly hefty portion of tender shrimp and chunks of creamy avocado along with coconut, pineapple and citrus. A little chili provided a mild kick and the whole thing sat on a bed of fresh bib lettuce.

Other apps I’d recommend include crab salad with spring peas ($16) and local lamb sausage on polenta ($14). Asparagus soup ($7) and a couple of salads ($7-$10) round out the more traditional appetizers, and you can get a warm pretzel with cheese, hummus and olives or a cheese-and-meat plate ($8-$15). I’ll wager they’re all pretty good.

Our server warned us away from one of the entrées: a veggie pasta he said was too bland. We tried all the others, and there wasn’t a dud in the batch. Two of us had the gnocchi with lion’s mane mushrooms (a variety I hadn’t seen before), spring peas and white truffle ($19) — savory, toothsome and satisfying. The bass ($29) was cooked just right, with a browned, toasty exterior and velvety center. The fish sat atop Yukon potatoes, parsnip and spring onion, all covered in a light butter sauce.

Those dishes were the consensus favorites at our table, but the duck preparation earned accolades, too. Slices of medium-rare duck breast drizzled with duck demi-glace accompanied diced sweet potato and apple ($21). A substantial Kentucky grass-fed ribeye steak ($32) pleased our meat-lover as it benefited from the sweetness of caramelized spring onion and the umami of tender morel mushrooms. Sea scallops ($23) were also cooked perfectly and had lots of complementary veggies on the plate, but someone added too much sea salt as a finishing touch. Not everyone is as sensitive to excess salt as I am, though, and the woman who ordered the scallops didn’t mind.

The wine pours covered the basic varietals you might want with a meal, with nothing too unusual but enough to keep us happy. My friend and I had a Mendocino County cabernet from a winery called Moniker, and it went well with both my gnocchi and her duck breast.

There definitely were some service mistakes and uncertainty from the waitstaff, including a noticeably long interval between our appetizers and the main course. I know an awful lot of restaurants are vying for a limited number of competent servers, and I hope that Overlook’s staff will gain confidence over time.

Our menu offered three desserts — a loaded brownie, raspberry-lime cheesecake and custard with sponge cake ($8 each). The brownie came with a bourbon vanilla sauce and a large scoop of Graeter’s black raspberry chocolate chip — too heavy for me after a big meal, but a couple of bites for each of us made more sense. I liked the lemony custard with slices of fried sponge cake; we didn’t try the cheesecake.

It took a while to get our checks settled, and I used the opportunity to bend a manager’s ear about the discrepancy between chef Goebel’s cuisine and the bar ambience. She was polite but clearly couldn’t do much about it except perhaps relay the comments up the hierarchy.

At these prices, and with such a talented chef, I hope they get the message.