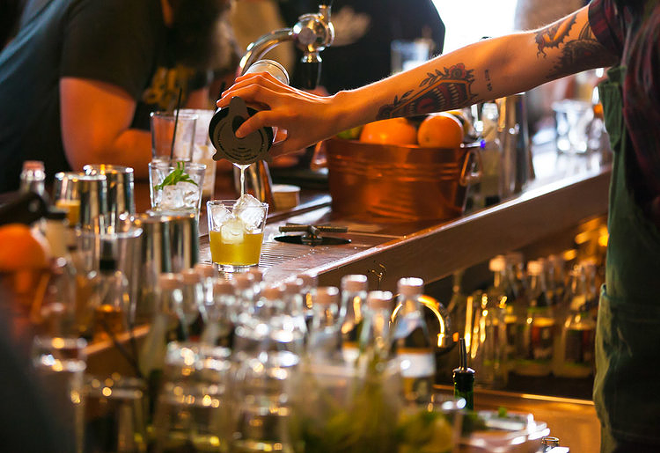 Since none of us live in Indy, here's what the Bottleworks District is, according to a press release: "A $300 million, 12-acre urban mixed-use development reimagining the iconic Coca-Cola building in downtown Indianapolis."

The building will include a food hall, called The Garage, which currently has 18 confirmed food and drink vendors — including Sundry & Vice; as well as retail, residential and office space and the Bottleworks Hotel. Sundry & Vice will be included in Phase 1 and is slated to open in fall 2020.

Stuart King, owner of Sundry & Vice, says the bar wasn't looking to expand into Indy originally, but he was offered an opportunity to be a part of the Bottleworks development that he says was almost kind of kismet — and he was offered a space in the food hall with actual walls, which sort of sealed the deal.

"We get our own separate space that we get to design and it's covered under the same liquor license as the rest of the food hall," he says. "It will give people the freedom to kind of come and go as they please, which is really nice."

In terms of design, because they have their own walls, the Indy Sundry will be able to maintain its own aesthetic within the Bottleworks development. King says they're working with their own designers to create something akin to the OTR bar.

"We're going to keep the same ethos in terms of the apothecary-style thing," he says. "The ceiling's got these big, gorgeous wooden beams so there's no reason to cover that up with our tin ceiling that we have in the OTR location. They're stunning. There's a lot of unique aspects to the space that we're going to have some fun playing with from a design standpoint. It will feel a lot more grand in scope and vision than our little modest guy in OTR just because the ceilings instead of being 12 feet high are 30 feet high."

The cocktail program will look similar to the one at the flagship Sundry & Vice, starting with the drinks that have historically done well. King says they'll most likely have draft cocktail offerings in Indy, too, "probably due to volume because there's a ton of excitement and interest about the development all over the state of Indiana." And as the bartenders gain their footing, they'll start making their own cocktail menus.

"Those books are like old textbooks and it's just dumb luck if a bookstore even sells those textbooks — which Ohio Book Store does," he says. "I've literally, because people like to take them away as souvenirs, I've completely emptied Ohio Book Store out of its vintage, old medical textbooks. I'm not kidding. That section no longer exists. So if I can find 'em, absolutely. I'm just going to have to find a bookstore like Ohio Book Store in Indianapolis to source them from."

Photo: Provided by Dittoe Public Relations
A rendering of the Bottleworks District