The apothecary-themed OTR bar has opened a new Sundry & Vice location in the boutique Bottleworks Hotel in Indianapolis. 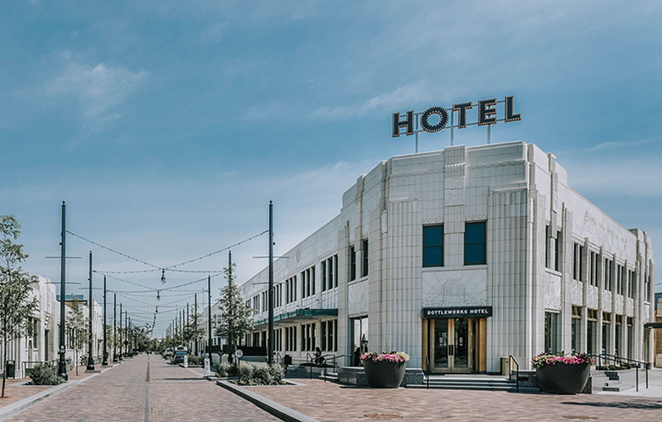 Photo: facebook.com/bottleworkshotel
Sundry & Vice is located in the Bottleworks Hotel in Indianapolis

Over-the-Rhine's apothecary-style drinking destination Sundry & Vice has expanded into a whole new state with the opening of its second location in Indianapolis' Bottleworks District.

"Our craft cocktails made with in-house syrups and freshly squeezed juices will bring a new and exciting flavor to Indianapolis," said Sundry & Vice owner Stuart King in a release.

In a 2020 interview with CityBeat, King said the cocktail program would look similar to the offerings at the flagship Sundry & Vice, starting with the drinks that have historically done well. "We're going to keep the same ethos in terms of the apothecary-style thing," he said.

Sundry & Vice is located near the lobby of the Art Deco-styled Bottleworks Hotel, which offers 139 rooms on the top two floors of the former Coca-Cola bottling works administration building.

In 2018, Sundry & Vice made the list of World's Best Bars at worldsbestbars.com. It will be joining other Ohio-based company The W Nail Bar, a natural nail salon from Columbus, as well as Wisconsin-based Blue Collar Coffee Co. at Bottleworks.

"When we considered expanding our brand outside of Cincinnati, Bottleworks definitely caught our attention. The mixed-use property has allowed for numerous start-ups and growing brands to thrive within a tight-knit community, and we are so excited to be a part of that," King said in the release.

Sundry & Vice Indianapolis opened for business in the hotel on Oct. 23.

"It's the perfect compliment to the hotel's historic-meets-modern aesthetic and will delight guests and the public with an ideal setting to drink and imbibe at Bottleworks," said Jeff Whiteman, Chief Operating Officer for Geronimo Hospitality Group, in the release.

Get more details about the hotel at bottleworkshotel.com and Sundry & Vice Indianapolis at sundryandvice.com.