Pendleton Gets Its First Creamy Whip No shape signifies summer quite like a soft-serve swirl, proudly perched on a sugar cone. It’s fun and frigid — like a vanilla ski resort that’s small enough to hold. The frozen fare is a timeless American tradition, and an integral part of Cincinnati food lore. The city’s sprinkled with neighborhood creamy whips: ice cream spots only open during the warmer months of the year, dishing out melty mounds of dairy and glimmers of local pride.

And one local family seems to have a growing monopoly on the market.

When Nick Ganim’s Pendleton Parlor opens this June (there’s no set launch date yet), it will be the Ganims’ third ice cream parlor overall and their first downtown. The family also owns the Mt. Washington Creamy Whip and Old Milford Parlor.

Ganim’s family has been in the dessert business since the 1920s, when his great-grandparents founded a German bakery in the East End.

In the ’50s, the couple moved to Beechmont, and the business moved with them. There, the Mt. Washington Bakery, which grew into a community staple, opened up shop.

Ganim’s mother, Mary, revamped the storefront in 2007 and gave it new life as an outlet for both pastries and frozen treats. Then Ganim opened Old Milford Parlor (in Milford) in 2014.

At the new Pendleton Parlor, a bona fide second location of Old Milford, visitors will be able to cool down with a diverse menu of creamy whip flavors ranging from strawberry to Thin Mint, but soft serve won’t be the only choice to fill your cup or cone. More adventurous customers can opt for edible cookie dough by the scoop or choose to blend the batter into a shake or sundae.

Ganim introduced the dough to the Old Milford Parlor last year, initially churning out two micro-batches per day. Since then, the store has increased their daily output to five micro-batches — about 30 gallons. The Mt. Washington Creamy Whip, run by his mother, has seen even greater success.

“Some days, we even sell more cookie dough than ice cream,” he said.

There are multiple flavors of dough on the menu, but the core offerings will always include chocolate chip cookie and sugar cookie with sprinkles.

Those seeking out a caffeine buzz alongside their sugar rush will also be able to order from a small menu of espresso drinks.

Though the business has expanded into new locations and experiments with new menu items, Ganim takes care to keep family history at the forefront of his operation. Visit the Mt. Washington Creamy Whip, and you’ll be able to taste the same recipe for “bear squares” — a coffee-cake/bear claw hybrid — that has been in the family for more 90 years.

If you find the expansive menu intimidating, Ganim recommends his personal favorite order: “It’s called the Java Whip: We brew the hot espresso into a vanilla milkshake. It hits the taste buds pretty hard.”

Each location features unique decor that hearkens back to its pre-parlor life. The Milford storefront, formerly owned by a barbershop, features a large mustache logo. The Mt. Washington shop is filled with a museum’s worth of antiques. Ganim is currently planning the Pendleton store’s interior decoration, which should prove to be as charmingly retro as its predecessors. Pendleton Parlor, 1216 Broadway St., Pendleton; Mt. Washington Creamy Whip, 2069 Beechmont Ave., Mount Washington, facebook.com/mtwashcreamywhip; Old Milford Parlor, 119 Main St., Milford, cincinnatiparlor.com.

Cincinnati’s creamy whip culture doesn’t end with the Ganim family dynasty. No matter where you live, there’s sure to be soft serve in your vicinity.

Putz’s Creamy Whip — Emerging at the tail end of the Great Depression, Putz’s Creamy Whip is a testament to American ingenuity. The store originally opened inside a pair of repurposed trolley cars and has since grown into a Westwood landmark, serving oddities like chocolate-coated frozen bananas, the Ice Man — soft serve with a smiley face made of candy, nestled in a blue snow cone — and cherry-dipped cones. It’s all made in the same Electro-Freeze ice cream machines the shop installed in the mid-’50s, imbuing each treat with a hint of nostalgia. 2673 Putz Place, Westwood, putzscreamywhip.com.

Dari-Crest — With its pink and purple signage and inventive spelling, it’s hard to miss Covington’s Dari-Crest, a frosty oasis for those in need of Hawaiian ice, malts or even snack bar staples like nachos and mozzarella sticks. Frugal families can take solace in the whip’s pint-sized prices: 60 cents for a baby cone and 95 cents for a kiddie cone. 3024 Madison Ave., Covington, 859-630-9438 and searchable on Facebook.

Norwood Delite Creamy Whip — Doggos and dog owners take note: Bring your pooch to the Norwood Delite Creamy Whip and score a free pet-sized cone with your purchase. It’s also one of the few ice cream spots that offers a cookie cone, the waffle cone’s even more decadent cousin. Adventurous eaters should try out the cherry-flavored red dip cone or the Krunch Kote topping — a curious blend of peanut crumbs and sprinkles. 4490 Forest Ave., Norwood, 513-841-1114.

Ice cream isn’t the only frozen dessert on the block. If you’re looking for a more thirst-quenching, vegan-friendly alternative to the dairy whip, keep an eye out for these ice pop stands. 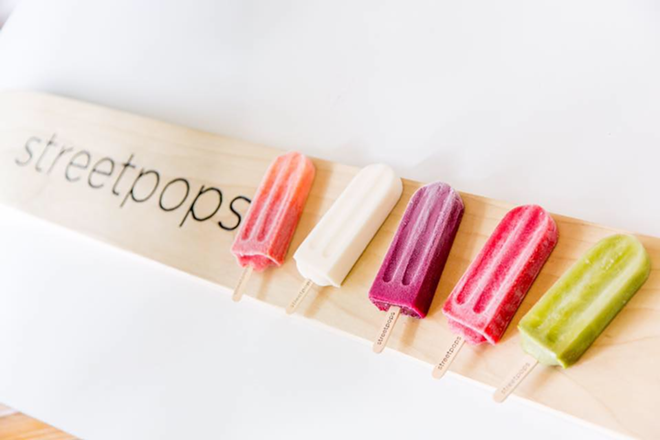 Bello’s Bike Pops — Located inside of Carabello Coffee, these gourmet pops are the perfect counterpart to a hot cup of coffee. Whether you catch Bello’s in-store or on wheels, their ever-changing menu is packed with intriguing flavors, like peanut butter and jelly, pumpkin spice latte and Thai iced tea. Expect the unexpected. 107 E. Ninth St., Newport, carabellocoffee.com.

Shiver — Relive childhood memories of sweet, icy goodness while enjoying pops that your younger self would not have legally been able to purchase. That’s right: Covington pop shop Shiver is your supplier for booze-infused popsicles — aka poptails — which include blackberry Cabernet and bourbon ginger flavors. Health-conscious consumers can lick on spirulina ’sicles and frozen green smoothies, while the more indulgent can savor peanut butter fudge pops. 522 Philadelphia Ave., Covington, shiverfrozenpops.com.