If you’re standing in the lobby of Proud Hound Coffee’s recently opened Silverton café and are reminded of Wes Anderson’s aesthetic, that’s intentional. 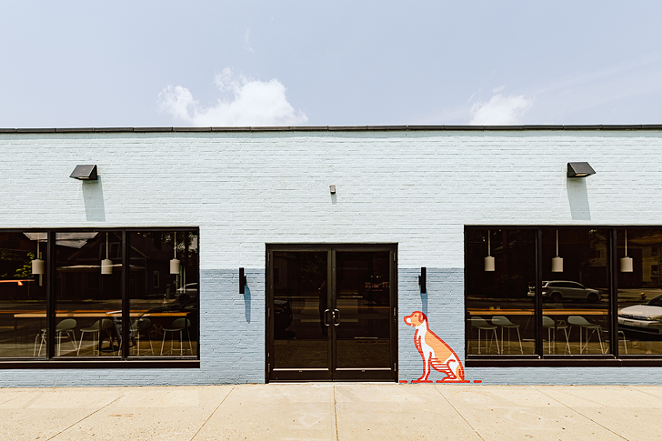 If you’re standing in the lobby of Proud Hound Coffee’s recently opened Silverton café and are reminded of Wes Anderson’s aesthetic, that’s intentional.

A punch-needle piece reading “Keep Chasing” by Jessica Ufkes of Thread Made Goods greets customers as they stroll in. Flanked by hanging plants on a pink wall, the framed work features a hound herding sheep. A mural spanning two walls by Emily Gable of Indianapolis-based Bootleg Signs is another eye-catcher, marked by Minimalist Pop Art.

“If you did a panorama (of the space), you would see the same thing from one shot to the next,” says Smith of the symmetry. “They would just be flipped.” 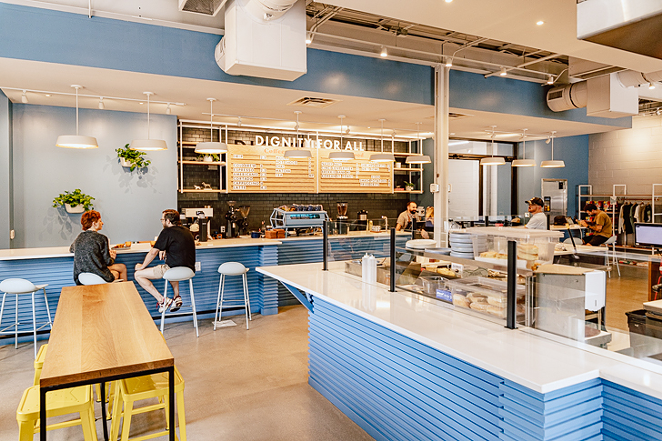 Located in a 4,000-square-foot warehouse at 6717 Montgomery Road, the café officially opened on June 26 — a milestone the team has been chasing for years. Since launching in 2019, Proud Hound has been helping Cincinnatians get their caffeine fix via pop-ups with its coffee truck and cart, wholesale operations, events and collaborations. The flagship location, complete with a coffee bar and full-service kitchen, also houses its roasting facility, viewable by customers through large glass windows.

Making approachable coffee minus the pretension is Smith’s and Holman’s aim. They want people to enjoy Proud Hound coffee, whether they’re used to store-bought brews or something more complex. That being said, experimental flavor profiles are available.

Customers can expect all the usual espresso-based beverages — cortados, cappuccinos, americanos, lattes and mochas — alongside cold brews, pour-overs and drip coffees. Not into coffee? The café also slings teas, hot chocolate and more. You can even order a picturesque blue matcha.

The kitchen, run by Executive Chef Kierstin Dudley, serves up Southern-centric breakfast and brunch with an emphasis on locally sourced ingredients and seasonal dishes.

Originally from Greater Cincinnati, Dudley had spent the past seven years in South Carolina working at gastropub The Southern Growl. Now she’s excited to be back in the Queen City as a part of its food culture. 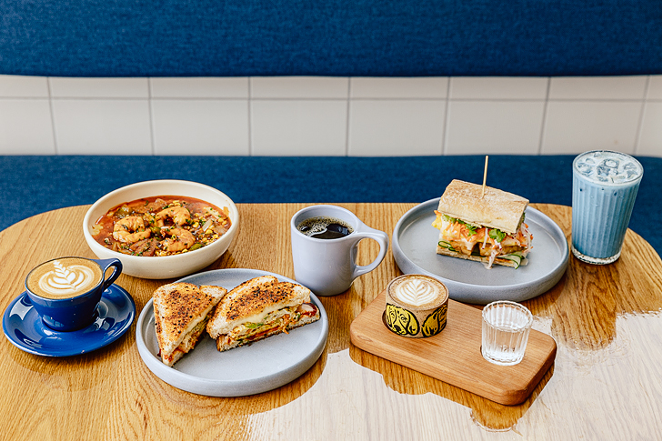 Photo: Hailey Bollinger
A spread of drinks and dishes available at Proud Hound, including blue matcha

“There’s kind of a void of approachable and affordable food,” Dudley says. “It’s like there is no middle and I’m trying to find the middle for the community.”

From the Nashville-chicken-inspired Nashy ’Nati Chicken sandwich to a Brekkie Banh-Mi, Korean Street Toast and a Cincinnati Love Letter with goetta, there’s much to devour. Dudley says the menu was scaled back for the opening, but the team plans to add more dishes eventually. Mostly, she says, they don’t want to limit themselves to one cuisine or style.

“I really hope that the people in the community are open to all the great options I’m doing,” Dudley says — including her grit tots and grit bowls.

“I love grits and it’s such a great and filling way to substitute for a gluten-free diet,” Dudley says. “So that was my direction with the grit bowls, not just because I’m searching for that Southern influence. But, honestly, grits are great and shouldn’t just be Southern.”

In addition to gluten-free offerings, vegan and vegetarian options are also available.

Proud Hound co-founders Smith and Holman met through Brick, a now-closed Norwood coffee shop, and found they had similar ideals when it came to coffee.

“We felt the same way about how we wanted to run a shop, our approach to coffee, the culture around a café and what we wanted the hospitality space to be,” Smith says. “So, after a lot of conversation and planning, in 2018 we started getting serious about mapping out what it would look like to open the space.”

They acquired the Proud Hound warehouse in Spring 2019 and kicked off their roasting program in September of that year.

And then, of course, the pandemic hit.

Along with most of the world, the timeline to open their café shifted. While Smith says they didn’t see extreme delays in construction, it did give them more time to boost brand recognition.

They had already planned on using their mobile truck, but the circumstances allowed them to utilize it in a different way. They were able to pop-up at events in an efficient, safe way all while showcasing their coffees and brand.

“It’s helped gain a more established customer base and allowed people to try us,” Smith says. “It gave people time to familiarize themselves with the brand and then the buildup was better to get people more and more excited about the space opening.” 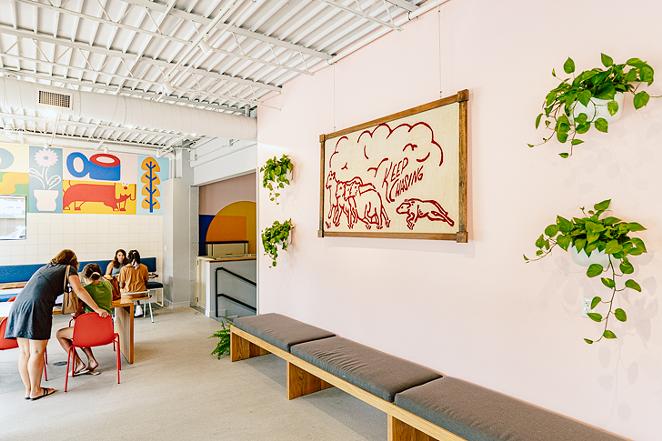 Look above the menu for Proud Hound’s mission statement: “Dignity for all.” And what better exemplifies dignity than a hound, the brand’s logo?

The brand’s forming members all have experience in the industry, both good and bad (along with Smith and Holman is Carl Arvidson, “director of everything,” who recently left to take a design job. Israel Jones, director of sales, and Dudley, are now also part of the crew). Seeing aspects they didn’t like in the coffee business in general, the team asked how they could capture great customer service while creating a better behind-the-scenes environment for employees. Smith notes that there are “a lot of amazing (coffee) shops (in Cincinnati), but especially abroad” that exceed in their focus on culture and employees’ experience.

“It is leaps and bounds beyond whatever we experienced,” Smith says. “We were like, how do we bring that to Cincy? And how do we make that a key component in our business?”

As they explored language surrounding the characteristics of hounds, the word dignity reappeared again and again.

“Consider when you meet a dog in public, it’s more often than not you will ask the name of the dog, forgetting the personhood of the owner,” Jones told CityBeat’s Hailey Bollinger in an earlier interview. “Proud Hound wants to reverse this trend:  illuminate the profound purpose and constant awareness of the valued humans (and dogs) involved in every degree of life.”

That idea extends to every arm of Proud Hound, including coffee farmers, employees, customers, neighbors and wholesale relationships.

“Every person has inherent value. And they should have dignity,” Smith says. Pound Hound’s café was designed with inclusion in mind, with a wheelchair lift, unisex bathrooms, infant high chairs and changing stations.

Smith, who lives in Silverton, also says Pound Hound has kept in mind that the neighborhood has existed long before they arrived. How they honor the residents of Silverton and its history is “super important,” he says. He wants to nurture an environment where those who call Silverton home feel welcome in the space.

​​From the kitchen to the coffee bar to the roasting process, everything is completely open. Like their penchant for Andersonian aesthetics, that’s no coincidence.