Chef/owner David Willocks and his wife, Wendy Braun, the decorator, opened the restaurant with a full liquor license at the end of 2018 as a breakfast, brunch and lunch venture. Dinner service started about a year later. What I like best about The Baker’s Table, a little gem of a restaurant in an unexpected corner of Newport, is simply the place itself. The charming, one-room dining and bar area has such a cozy, inviting décor and ambiance that one immediately feels at home. I’ve had two dinners and one brunch there, and each time I kept looking around the room trying to figure out what was responsible for that feeling of well-being.

The first thing you see to the right of the entrance is a lounge area consisting of a beautiful gold upholstered sofa, a few comfy chairs and cute accents such as potted plants, an unusual bench and a couple of small side tables (perfect for setting a drink if you’re waiting to be seated). One wall is made of red brick and features framed photos, the subjects of which you can’t really see from the tables but upon closer inspection are Audubon prints of birds. At the back of the dining room, behind a large communal table, there’s a triple mirror in oval shapes that I covet for my house.

The marble-topped bar to the left includes about a dozen well-spaced chairs with backs — that’s a big deal to me as I don’t want to sit in a backless stool for more than about the time it takes to have one drink. At this bar, I’d be happy sitting for hours.

But my happiest time here so far was at a table for six by the front window on a rainy Thursday night. We drifted in, shaking off our wet clothes, and spent a couple of hours enjoying a leisurely dinner. Our server, whose name was Grace, worked at a pace I have to call “just right.” We never felt rushed nor neglected, which can be a hard balance to achieve in today’s busy, staff-challenged restaurant world. 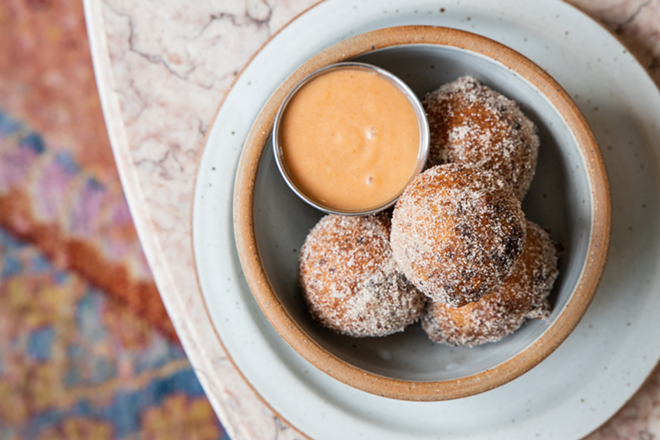 Chef/owner David Willocks and his wife, Wendy Braun, the decorator, opened the restaurant with a full liquor license at the end of 2018 as a breakfast, brunch and lunch venture. Dinner service started about a year later and that’s when its fame really started to fan out beyond Newport and nearby environs. Even before that, the nationally known website Eater included Baker’s Table as one of the 16 best new restaurants in the U.S., calling it “a homey daytime café from a husband-and-wife team offering rustic American dishes that capitalize on top-tier bread baking.” (It was also voted the No. 4 best new restaurant of 2019 by USA Today’s 10Best.)

My two dinners demonstrated that the kitchen has gone way beyond bread as a mainstay of the menu, with a focus that isn’t really on baked goods at all. Breakfast, lunch and brunch bring the chef’s baking talents more to the fore, but the evening meal mostly goes in different directions.

Dinner tends to offer three or four pastas, a vegetarian main course and a few entrées with meat, poultry and/or fish. That’s in addition to a handful of salads and a half-dozen starters — which is where you’ll find most of the bread or bakery items. The menu changes at least monthly so you may find quite a different array of dishes from those we enjoyed.

I hate to say that the food played second fiddle to other aspects of the experience (ambiance, service, décor) but that’s kind of how it happened for me. And it’s super unusual since the No. 1 criterion for me in assessing a restaurant has always been how much I like the food. Not that there was anything wrong with what we ate and drank at dinner or brunch — some of the dishes and cocktails were exemplary. For instance, I was in love with a green curry with tofu and rice as a dinner entrée ($20) on my first visit, but it had been replaced with a different vegetarian main course the next time. Some of the starters wowed everyone at our table another night, especially the crispy tempura-style veggies in the Winter Fritto Misto with preserved lemon aioli ($13) and the shredded duck meat in duck rillette with peach mostarda, sourdough bread and pickles ($17) — both in generous enough portions for six to sample.

Other than the curry, I’ve been mostly underwhelmed by the main dishes. I tried chicken breast with creamy polenta and broccolini ($24) but the chicken was too dry and the polenta lacked seasoning. Pappardelle with roasted mushrooms and spinach ($17) was also on the bland side, although another pasta dish on the February menu — tagliatelle with sausage ragu ($16) — was excellent.

Brunch definitely is a strength of this kitchen, perhaps because they’ve been at it a lot longer than they’ve served dinner. The Seasonal Mains menu section had five dishes in its most recent iteration, and everything looked worth trying, from corned beef hash ($16) to banana pancakes with Nutella ($14) and ricotta toast with strawberry rose jam ($11). I selected smoked salmon toast on rye with crème fraîche ($14) and my companion went with eggs, bacon and brioche with jam ($10), both from the Classics menu section. That brioche was two inches thick, toasted to perfection and served with a couple slices of bacon cooked exactly as she had ordered it — crisp and not greasy at all.

There’s a lot more to love on that brunch menu, including baked treats that spring from the restaurant’s namesake. If you can’t get there on Saturday or Sunday, they also serve breakfast Wednesday through Friday with many if not most of the same brunch dishes available. Lunch on those same weekdays adds a few lovely sandwiches, such as braised lamb on ciabatta or a Reuben on rye (each $14). All the breads, naturally, are baked in house. You can grab a cookie or some biscotti on your way out the door or order them with coffee if you’re there mid-morning and want just a light bite.

We sampled a few cocktails and glasses of wine, and the drink I’d recommend most highly is the Breakfast Martini ($11): dark rum, cream, espresso and bitters served on the rocks. They’ll make it for you any time, not only at breakfast.