You Can Have It All at Howl at the Moon/Splitsville

A David Lynchian atmosphere, fusion menu and buckets of booze await at this restaurant/entertainment destination. 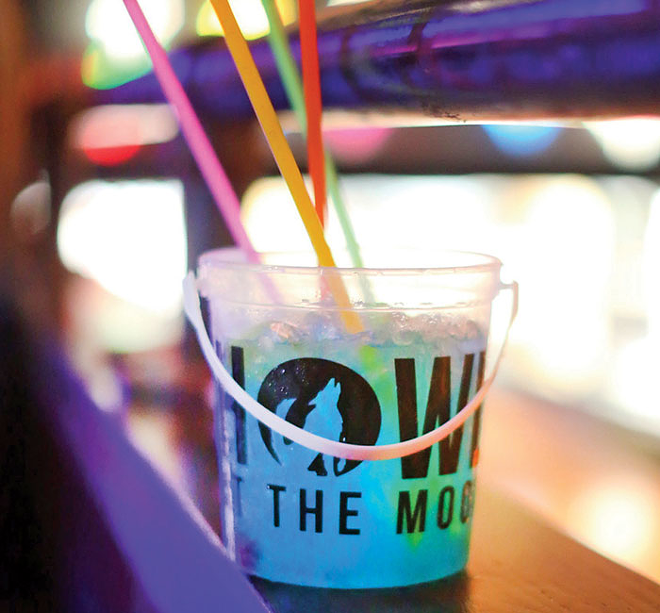 Photo: Blue Martini Photography
Howl at the Moon/Splitsville has food and drink options to please almost everyone, especially those who like blue alcohol.
Earlier this year, I was discussing apartment shopping with my father and we were going through a laundry list of what an ideal new apartment had to have: a washing machine, preferably two floors, a guest room, green space. Making these requests of the landlord gods was laughable and I doubted we’d ever be able to find an apartment that would make the cut. But his reply was, “Why can’t we have it all?”

The restaurant/entertainment destination is located at The Banks, already home to Cincinnati’s feverish hallucination of luxury sportsball and chrome, which I tend to forget exists until I’m being convinced by a friend that I, my high school’s anime club president, would enjoy a Reds game or that maybe Oktoberfest will be less crowded this year.

It was this exact thinking that led me to Howl at the Moon/Splitsville the Saturday of Oktoberfest. I was entirely too sober for the accordion music and the kind of aggressive hangry that was making my boyfriend ignore me. We were walking aimlessly past crowded food stands at the fest when I spotted Splitsville’s neon sign in the distance.

As we entered, a perky waitress seated us near the windows and asked us what kind of alcohol we wanted. The streetcar drifted by outside and men in lederhosen clambered on board. Yes, Howl at the Moon/Splitsville is adjacent to a streetcar stop. As Cincinnati Bell puts it: connecting what matters.

Howl at the Moon/Splitsville’s vibe was everything I hate to love about Ohio. Country Pop was blaring, there were six televisions playing sports I could watch from my booth alone, men were yelling at the athletes on the screen and a disco ball spun from the ceiling.

Past the bar was a stage with assorted instruments covered by a projector screen playing — you, guessed it — sports, which is great, depending on how much you love sports. There were signs advertising the ability to “book your next party here,” and I was flattered that this place thought I threw that many parties. The sound of bowling balls knocking through pins was a distant background noise. There are no words to describe the absolutely accidental Lynchian atmosphere this restaurant/bar/bowling alley has created.

For drinks, my boyfriend and I decided to split the Adios Amigo. We were trying to have it all, and this drink had it. It contains UV Blue vodka, curaçao, gin, tequila, rum, some sort of lemon and lime soda and something ambiguously labeled “sweet and sour.” We tried to order the bucket but were told we would have to settle for the “Bone” version of the Adios Amigo, as the liquor content in the 86-ounce bucket would have incapacitated the two of us.

The Bone was only $15, which isn’t bad for 24 ounces of alcohol and sugar served on the rocks. The drink was electric blue. It tasted like blue, too. With all of the different types of liquor inside, there wasn’t a clear winner. But that certainly doesn’t mean there were any losers. It was served with a few lemon slices and two cherries in a tall glass shaped like a cartoon bone (though I’m not sure if I would’ve landed on that metaphor had it not been fed to me by the menu).

I fancy myself a bit of a liquor expert and I drank a majority of the Adios Amigo and swore there was more soda and ice than alcohol. My boyfriend patted my hand lovingly. Ten minutes later, I was exclaiming, “Instagram is fake — where are our real friends?” as I took a photo of the disco ball above us. Twenty minutes later, his phone buzzed. I asked him who the hell was texting him at this hour. It was 8 p.m. It had been me. There’s something refreshing about the drinks at a chain restaurant packing a punch.

I imagine that if I called my father and asked him what he would put on the menu of a restaurant, he’d hem and haw, then suggest pizza, well, maybe, sushi? And burgers. Definitely burgers. And that, folks, is the menu at Howl at the Moon/Splitsville: pizza, sushi, burgers, nachos, taco salad, brownie sundaes… it goes on and on. We ordered the crab Rangoon sushi roll ($10), a cheese pizza ($9) and the classic burger ($9) to sample the three major players.

The sushi came out first. Advertised as Kani Kama krab, cream cheese, water chestnuts and chives tempura-fried and served with Thai chili sauce, Sriracha chili sauce and spicy mayo, the sushi is surprisingly delicious for a classy bowling alley restaurant tackling Asian fusion. The sauces were served decoratively across the bottom of the plate and had a nice little karate kick to them.

The pizza was massive and delicious with a thick bready crust and a fresh-tasting tomato sauce under the layers of melting cheese you’d expect from an Americana restaurant. I’d been expecting a personal pizza for $9 — we were at The Banks after all. Nope. Good news is that if you and boo are at The Banks on a budget, Howl at the Moon has you covered. They offered a variety of toppings for only a few more bucks, too; the most expensive pizzas are only $12.

The burger was typical, which is not at all a bad thing. It’s comforting to take a bite of a burger and feel like you’ve had it a million times. It was a hearty sandwich with traditional toppings, served with thick steak fries.

When we got up to leave, a man leaned forward from his barstool and held up his fist to me. I’d been inside Howl at the Moon/Splitsville long enough to know exactly what to do: I whooped and fist-bumped him back.

Howl at the Moon renewed something warm and Midwestern inside of me. Something full of pizza, burgers and sushi. So if you find yourself wandering The Banks, stop into Howl at the Moon, because sometimes we really can have it all.