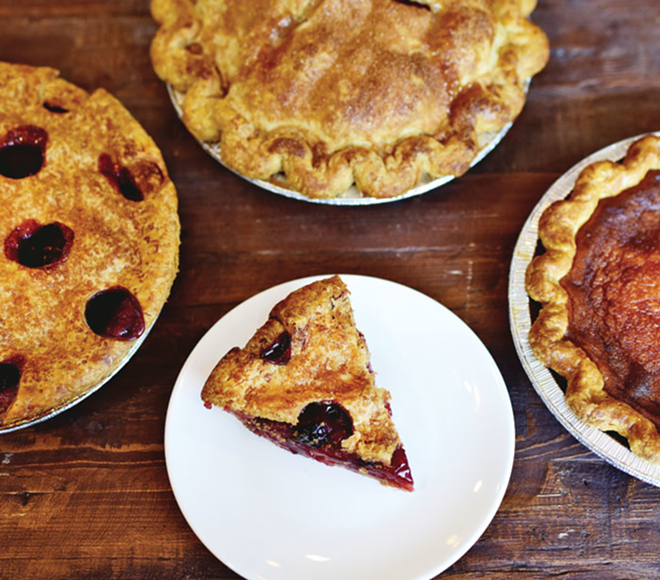 Grab sweet and savory pies by the slice or whole — and a glass of wine — at O Pie O’s new café.

First, it was cupcakes. Sex and the City and Andy Samberg (vis-à-vis the SNL short “Lazy Sunday”) propelled Magnolia Bakery to the top of the pop-culture bucket list, and TV station TLC even gave Georgetown Cupcake in Washington D.C. its own show. Then came Dominique Ansel’s cronut, a croissant-donut hybrid that had foodies waiting in hours-long lines just to try one. And as of now, people seem to be pretty content with macarons taking over as the bakery-trend du jour. But for Lou Ginocchio and Ian Sobeck, co-founders of recently opened East Walnut Hills café O Pie O, it’s always been about pie.

You might have seen Ginocchio or Sobeck selling their goods (like their luscious honey vinegar pie) at Findlay Market over the past year, where they decided to start vending because it was taking so long to get into the building they had obtained on Madison Road. It actually turned out to be a bit of a blessing in disguise, helping them get the word out about their pies and the still up-and-coming restaurant.

O Pie O is a family affair, as Sobeck, in addition to being a co-founder, is also Ginocchio’s brother-in-law. Before coming to Cincinnati, he was the sous chef and kitchen manager at Seattle vegan restaurant Sutra, and Ginocchio was studying for his Ph.D. in Alabama. But they decided to make the move back to Ohio because, Ginocchio says, “We really wanted to raise our kids together as cousins.” But they also liked the idea of having a business that was in the family, and with Sobeck’s culinary background, a restaurant or café seemed like the natural choice. The idea for pie came when Ginocchio’s father, who helped finance the restaurant, visited famous Brooklyn, N.Y. pie shop Four & Twenty Blackbirds.

They were also attracted to the idea of setting up shop in an up-and-coming Cincinnati neighborhood, and one that wasn’t necessarily Over-the-Rhine. “There’s a certain energy coming from (East Walnut Hills) — it’s diverse in a very real sense,” Ginocchio says. “All different races and socioeconomic classes, and it’s both residential and commercial… there’s a feeling in the neighborhood of change that we wanted to be a part of.”

The family also has deep roots in the East Walnut Hills area. “My grandfather was born there, family members were married in the Saint Francis de Sales Church, and I attended Purcell Marian High School,” Ginocchio says.

When I stopped into the restaurant for a bite to eat with a friend on a Tuesday evening, the space was perfectly crowded; there were a few couples enjoying their meals inside and a group of ladies seated in the restaurant’s cozy outdoor space. The host/server/food-runner (there seemed to only be one person on the floor) was pleasant and mostly attentive, but, as is the case with most small, new restaurants, seemed a bit frazzled.

While Findlay-Market-famous for their sweet pies, O Pie O’s restaurant also does savory — pot pies, quiche, empanadas, etc. And they serve breakfast, lunch and dinner with a selection of both types. For dinner, my friend ordered a slice of chicken pot pie ($11), while I opted for two of the smaller options: the corn and cheese empanada ($7) and the savory pocket pie ($9), filled with ham, cheddar and red pepper.

Sobeck’s pie crust anchors the menu with a flakiness that truly melts in your mouth and tastes just as lovely and buttery whether filled with sweet or savory ingredients, both of which Sobeck tries to source as locally as possible. My empanada was fantastic, but the real stars of the dish were the three dipping sauces it came with, each more delectable than the last: tomatillo crème fraiche, which I had to keep

myself from drinking, spicy chimichurri and a mole. The savory pocket pie and chicken pot pie were hearty, comforting and delicious, though the side of soup that came with the pocket pie was too large.

The rest of the sides also seemed a bit incongruous with the menu — they have greens with housemade dressings, but the two types of slaw offered — Carolina and red — don’t quite fit as companions to any of the savory pie options.

Though I’m not a big drinker, I was pleased to see that they offer a rosé by the glass, the one type of wine I will willingly imbibe, which I drank while my friend and I split a slice of the rosemary caramel apple pie ($5) with vanilla ice cream ($2 extra for à la mode; they serve both Graeter’s ice cream and Madisono’s Gelato). Sobeck’s crust is, again, the star, but the way he manages to coax an herbal rosemary flavor out of his caramel apple mixture is also a standout — it’s subtle and earthy and perfectly balances the sweetness of the rest of the pie.

They also have a curated selection of local craft beers sure to please any brew enthusiast (at least, I think so; I don’t drink beer). Ginocchio says they’re also planning on adding a cocktail menu in the near future.

“We want this to be a gathering place for the neighborhood,” he says, “where people can stop in for a drink and a slice of pie and relax.”