Bodenstein describes Piccolo as a more casual eatery that focuses on the neighborhood and offers “approachable price points." 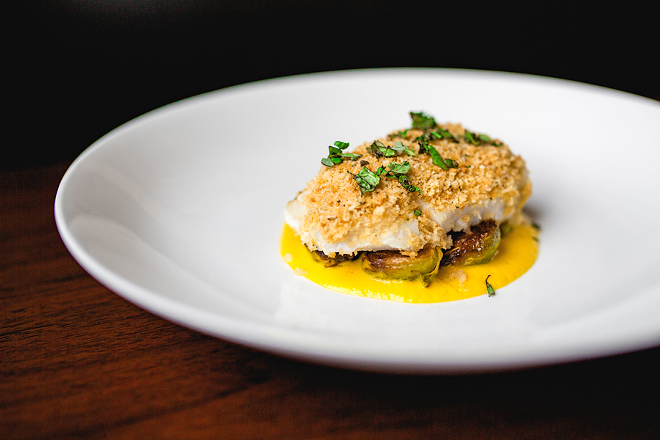 Photo: Hailey Bollinger
The pasta-heavy menu at Italian eatery Piccolo Casa also features entrées like Sicilian cod.
Chef Mark Bodenstein has a knack for selecting familiar ingredients and preparing them in somewhat unusual ways to create flavor combinations that transcend the sum of their parts. Or he adds vegetables you’ve barely heard of to a side or entrée, resulting in your tablemates passing the dish around in a game of “Guess what makes this so good?”

Dinner at his new place, Piccolo Casa, gave me a reintroduction to his adventurous style, but this time in a more familiar culinary milieu: pasta-centric Italian.

I’ve long admired Bodenstein’s cooking, although some of his restaurant ventures struck me as way too avant-garde for his Northern Kentucky locations. Diners on both sides of the Ohio know Bodenstein primarily from his restaurant NuVo, which made a brief but memorable splash in its original Newport location in 2007. I made it there only once before it closed in 2009, but in 2013 he reopened Nuvo on Greenup Street in Covington and managed to release his inner foodie geek.

For a while, his restaurant had no menu. Dinner consisted of six small courses, each chosen by Bodenstein, with optional wine/drink pairings. On our handful of visits, I thought it was great fun to experience whatever mystery creation the server set before us — a true adventure in dining. But there usually weren’t many fellow diners, and I definitely got the impression that the restaurant was a tough sell.

“People don’t like change,” is Bodenstein’s short-version explanation for the ultimate failure of the NuVo concept. But in other ways he was ahead of the curve even 10 years ago, when he cared enough about using local, farm-fresh ingredients that he drove to every farm, every week, to get their products. “Farms didn’t deliver to restaurants then,” he says. That’s not the case anymore, of course.

The restaurant is quite small: one room with eight tables and an adjacent room that has a small bar. There’s a room upstairs for private parties, but patrons and servers have to climb an old, narrow set of stairs to get there. In nicer weather, a backyard dining area will add significantly more table space.

Four of us visited on a cold Friday night when the dining room was fully booked, but with just two seatings per table, there’s not much capacity. (Bodenstein said they turned away at least 20 patrons the night we went.)

We were among the night’s first arrivals, so our 20-minute wait for drinks after we ordered rubbed me the wrong way. But everyone enjoyed the libations — a porter from Covington’s own Braxton Brewery ($7) and cocktails like the Godfather (Scotch and amaretto, $14) and Italian Manhattan (with a touch of the Italian digestif, Amaro, $15).

In keeping with the reboot from esoteric NuVo to approachable Piccolo, the menu presents all the food offerings on a single, one-sided piece of paper. You can put together a meal entirely of smaller portions or go for larger bowls of pasta and full entrées. We did a little of both.

Two of us selected one of the four bruschettas ($5 each) to start, and as I would expect coming out of Bodenstein’s kitchen, the flavor combinations were both pleasing and a little surprising. Most unusual was the pickled beet with parsley pesto, chive and burrata cheese; the pickled beets showed up later, too, as a salad ingredient. The one we almost fought over, though, had goat cheese, fig jam and toasted hazelnuts in a perfect balance of sweet, creamy and crunchy.

We also tried the hearty Italian vegetable soup ($5) and a salad called the Sicilian ($9), a large plate with the aforementioned beets, fennel, apple, frisée lettuce and sherry vinaigrette. In both dishes, the veggies took center stage, reflecting Bodenstein’s deep affinity for produce.

For mains, choices include a section of half a dozen pastas and four entrées. Happily, each of the pastas, plus a potato gnocchi dish, comes in full or half portions and range from lighter options such as clams with linguine or cacio e pepe to a rich rigatoni Bolognese or a dish called Spaghetti Amatrice, with onion, local bacon and tomato sauce.

My friend, Mary Rita, and I each selected one of the pastas; a full portion of clams and linguine for me ($18) and a half of the Amatrice ($9) for her. Both were enhanced by bits of excellent, meaty bacon. Her husband, Buddy, and my guy, George, each tried an entrée. Buddy’s Sicilian cod ($27) turned out to be a smallish piece of fish coated in rosemary breadcrumbs and baked. The best thing about that dish was what else was on the plate: caramelized Brussels sprouts with coconut and pumpkin purée, one of Bodenstein’s more interesting flavor combos. George’s sea scallops ($28) came with a filling mushroom risotto and a dollop of lemon salad. Again, the accompaniments tended to outshine the star ingredient, which really isn’t a bad thing.

In fact, I’m looking forward to later in the year when the farms and gardens give up their bounty. It will be fun to see what Bodenstein comes up with when he has the full array of local produce to work with.

He told me in a later phone conversation that he was just about ready to shut NuVo and get out of the restaurant business when friends pointed out that there’s no Italian restaurant in Covington. He decided to try this concept: a more casual eatery that focuses on the neighborhood and offers “approachable price points” where tips aren’t accepted but service is folded into the prices. I like that, and apparently the neighborhood does, too.