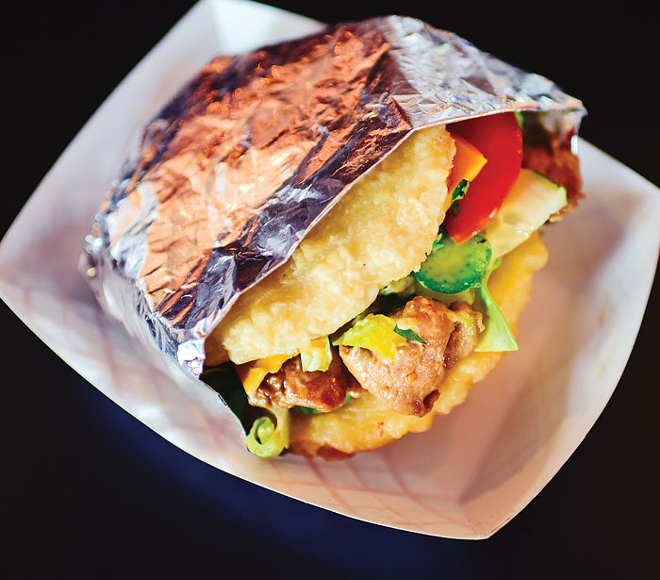 Next time you find yourself in West Chester near Union Center, pass all of those glossy new restaurants and keep driving, past those establishments with cloth napkins, hostesses, plastic chopsticks and mood lighting. Don’t blink. Go to a strip mall off of State Route 747, into the Marathon gas station-adjacent, nondescript mom-and-pop sushi restaurant, Sushi Monk. Trust us.

On a recent Friday night, I found myself at said strip mall, heading into said restaurant. I was feeling a bit perplexed by the sharp contrast between the image in my mind of “sushi in West Chester” and the tiny, casual space before me. Good thing I left my fancy pants at home, because this place was charmingly no-frills.

The owner Calvin Tam greeted my boyfriend Brian and I warmly when we entered; his wife was waiting tables. They directed us just a few steps to one of the only empty tables in the small eatery.

Looking over the menu, there were a lot of things we wanted to try. Brian has a gluten allergy, so he couldn’t order anything with breading or tempura flakes; I do not have a gluten allergy.

To start, I ordered the aptly named Fantastic Mushroom Tempura ($7), which I had no trouble devouring on my own, and some standard edamame ($4.25). I don’t know if ordering a lychee sake ($9) to drink was the best pairing decision, but it was still tasty and sweet.

For our entrées, Brian ordered several types of nigiri ($2.50-$4), which were quite large, and a Trio Roll ($11), which consisted of tuna, salmon, yellowtail, avocado and spicy mayo. I opted for a bowl of noodles. The Sho-Yu Ramen ($11.95) has a soy-sauce-flavored broth with seaweed, scallions, crabstick and tofu. It was tasty and filling and such a large portion I ended up taking half of it home.

As the disco ball in the corner turned slowly to the wordless dance music filling the deep-red room, we patted our satisfied bellies and struck up a conversation with the sweet, smiling waitress. She told us about the restaurant’s food truck, Monk Express, and some of the specialty items it serves — food-trend-of-the-moment sushi burritos, rice-cake burgers, ramen and “The Crack,” salmon-wrapped crab with jalapeño, avocado, spicy mayo and eel sauce.

The Tams started Monk Express as a creative way to amp up their five-year-old business. The lunch rush at Sushi Monk had apparently been hit-or-miss — good sushi takes time and money, which isn’t always ideal for lunch crowds. So the Tams took a break from serving lunch and started taking their truck to various locations nearby to see how a more lunch-crowd-friendly menu would fare.

The sushi burritos and rice burgers were so popular that they even opened the brick-and-mortar restaurant back up for lunchtime, serving those specialty items there as well.

I knew I’d have to come back soon to find out what these mysterious sushi burritos and rice burgers were like. A week later I returned with my friend, CityBeat photographer Jesse Fox, in tow to try out the food truck menu and its creative options.

We shared a spicy tuna sushi burrito ($9) and a vegetarian rice cake burger ($8). The sushi burrito was just like tearing into a large un-cut sushi roll. A seaweed wrap encased rice, cucumber, avocado, lettuce, tomatoes, spicy mayo, lime juice, cilantro and a generous heap of spicy tuna meat. It’s a little tough to tear through the seaweed with your teeth, but it was tasty and definitely easier to eat on the go than sushi rolls.

The rice burgers consisted of two rice patties, lightly fried to hold their shape, which acted as buns. Sandwiched between the rice buns was American cheese, cucumber, avocado, lettuce, tomatoes, spicy mayo, lime juice and cilantro. Jesse joked that it was the perfect way for an Asian menu to cater to our American palates — fry it and put cheese on it and we’ll eat anything.

It was tasty and unlike anything I can easily describe regardless of country of origin. The patties reminded me a bit of the Korean rice stone-bowl dish dolsot bibimbap. If you leave the rice against the sides of the hot stone bowl, it creates a crispy, chewy treat very similar to the rice used for the bun of the burger. (If you haven’t done that before, add it to your bucket list.)

There were several other options for fillings for both the burger and burrito, including crispy chicken, ginger chicken teriyaki, shrimp tempura, spicy crab and salmon.

Even if it’s from a strip mall or off the back of a truck, Sushi Monk proves that it’s not all about where you get your sushi, it’s the quality and the people serving it up that matter.

You can find Monk Express by following its Facebook page or at Friday’s Food Truck Ralley at The Square at Union Centre in West Chester from 11:30 a.m.-10:30 p.m.