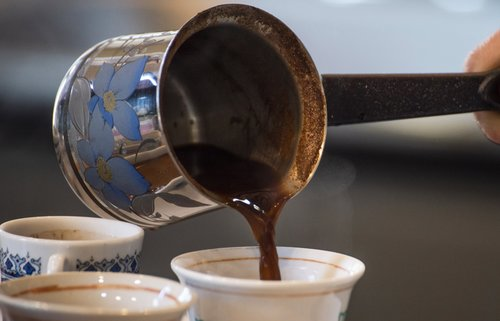 A good cup of coffee can transcend culture. At least, that’s the premise behind Rüya Coffee, the brainchild of Melissa Aydogan, one of People's Liberty 2018’s Globe Grant recipients.

Aydogan is a first generation Turkish-American. Through Rüya — a pop-up Turkish coffeehouse that will be open from Sept. 7 to Nov. 18 — she hopes to lend a positive voice to a generation of Middle-Easterners marginalized by the media. It’ll be hosted at People Liberty’s Globefront gallery in Findlay Market, which will become a place transformed.

As described by PL: Guests can chat over a cup while lounging on cozy ground seating. Turkish rugs will line the floor. Lanterns will dangle. Music will join with chatter as patrons eat sweets and sip on coffee. Just across from Findlay Market, anyone and everyone can come together.

“In my family, we gather at the end of meals for coffee and read each other’s fortune through the coffee grinds,” Aydogan says in a press release. “It’s mostly a time to talk about aspirations, hopes, dreams and things you want resolved in your life.”

The tradition of Turkish coffee goes back centuries. It’s thick, robust, dark and at the center of culture.

On the pop-up’s website, a Turkish proverb reads: “Coffee should be black as hell, strong as death and sweet as love.” It’s also important to note that the term “Turkish Coffee” refers to the brewing method, not the beans. “Finely ground coffee is briefly boiled in a copper ibrik,” the website explains. “The coffee is then poured into small cups, resulting in a thick, textured brew.”

Throughout the coffehouse’s stint, events will be held, too. Look out for Aydogan at Second Sunday on Main Aug. 12 for a sneak peek of what Rüya has to offer. The grand opening takes place 6-9 p.m. Sept. 7 and features Mediterranean bites, live Turkish music and Turkish-coffee-making demonstrations, plus tea and coffee cocktails. On Sept. 15, a local Turksih ūd player Mert will perform. (An ūd is a pear-shaped, short-necked stringed instrument prominent in Islamic culture.)

Other events are TBA. You can learn more at ruyacoffee.com.