Cincinnati-born brewery founder Jim Koch wants the Queen City to be a significant part of the future of Samuel Adams' beer, just like the city was for the beer's early days.

It's no secret that breweries are a mainstay of Cincinnati. Today, there are more than 70 breweries across the Greater Cincinnati area, each with its distinct selection of beers and backstory.

But as much as beer is a part of present-day Cincinnati, the brewing industry is also tightly intertwined in the city’s history and identity.

Jim Koch, the president and founder of Boston Beer Company, wants the Queen City to be a significant part of the future of Samuel Adams' beer in the same way it was crucial to its beginning. That's why he and the company are expanding the Samuel Adams brewery here in a major way.

The expansion, which began in July, is a significant investment in the Over-the-Rhine brewery. More than $85 million has gone towards advancing the production capabilities of the plant and is the largest brewery investment in Cincinnati's brewing history, a release from REDI Cincinnati explains.

Cincinnati is Koch’s hometown. He was born and lived in the area until he left for Boston to attend Harvard University, where he graduated in 1971 with his Bachelor of Arts degree and again in 1978 with a Masters of Business Administration and a Juris Doctor degree.

After working for a management consulting firm for several years, he returned to Cincinnati to formulate his business plan for a brewery company.

In 1984, Koch’s father took him up to the attic of his childhood home and dug out an old recipe. That recipe eventually became the Samuel Adams Boston Lager. 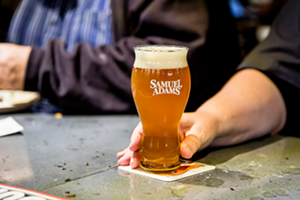 That recipe had been used by six generations of Koch family brewers and became a crucial part of the beginning of the Boston Beer Company.

And since Koch hails from Cincinnati, the Queen City is arguably the birthplace of Boston Beer.

Koch debuted the Samuel Adams Boston Lager in Boston on Patriot’s Day in April 1985. A short six weeks later, the beer was voted “Best Beer in America” at the Great American Beer Festival.

In 1996, 11 years and several beer milestones later, Koch bought the brewery that his father had apprenticed at; Cincinnati’s Hudepohl-Schoenling Brewery, which was over a century old at that time.

“I think there's a real opportunity here in Cincinnati because there's such a rich brewing history here,” Cincinnati Taproom manager Keith McEly tells CityBeat. “When Jim bought the brewery back in 1997, it kind of was unheard of for the brewery to ever really be a public-facing entity. At that point, people weren’t really interested in the manufacturing process.”

“Since then, I think that things evolved and the culture of our industry overall has really undergone some big transformations,” he continues. “Samuel Adams has a few different hospitality locations throughout the United States and I think it made sense to have one here, given that so much of our production is coming from Cincinnati.”

Since creating the Boston Lager, the Samuel Adams brand has crafted more than 60 styles of beer, according to the company website.

And of course, if you have ever attended Oktoberfest Zinzinnati, you are probably already aware of the sweet, toasty, and hearty flavor of Sam Adams Octoberfest beer.

But now Koch wants to use his brewing portfolio to push Cincinnati's brewing reputation even further.

In July, the Samuel Adams brewery in Over-the-Rhine began its 18-month expansion plan that aims to reinvigorate and advance the rich brewery industry of the city’s past.

The plan includes remodeling two canning lines, constructing the new building extensions on the north and south sides of the brewing plant and constructing new parking areas and routes for delivery trucks. The project is expected to create over one hundred jobs once completed.

The company estimates that this investment in the Samuel Adams plant will allow the company to quadruple the production of Samuel Adams, Angry Orchard, Twisted Tea, and Truly Hard Seltzer in Cincinnati.

“Obviously a lot of our friends in the hospitality industry right now are struggling, I think it's been a difficult past year for a lot of people,” McEly says. “I think part of the idea was to really highlight some of the restaurants in the city that are doing great things with food and beer.”