Catch a buzz (or don't). Either way, raise a glass to supporting bees and other pollinators 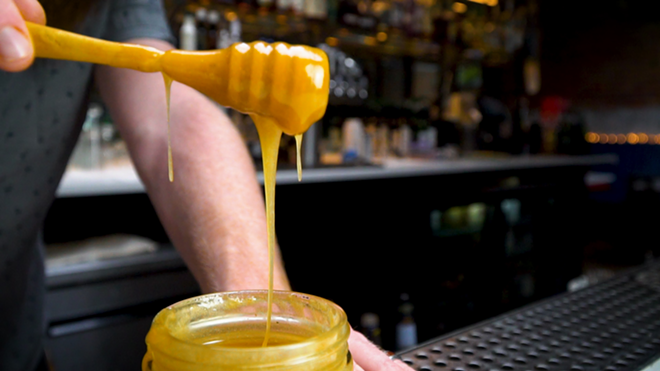 Photo: Tommy Migaki
Honey-infused cocktails (and mocktails) will be available at Sundry & Vice and Comfort Station this week.

Raise a glass for #HoneyBoyWinter.

Sundry & Vice and Comfort Station will be slingin’ specialty cocktails (and mocktails) that support native pollinators all week long. Infused with local honey from Carriage House Farm, a portion of the proceeds from the drinks will be used to build bee and pollinator-friendly plant habitats.

Also made in partnership with B the Keeper — fronted by Brandon Reynolds, a beekeeper at Carriage House Farm — the pun-filled libations include “I’ll Bee Rye Back," “Honey I Smoked The Hive," “Night Cure," “Birds, Bees, And Gin” and “Worst Beehavior.”

As Reynolds notes, beekeepers often define honey bee colonies as “superorganisms” or “the perfect team.” Rather than working as individuals, bees work as an entire system to meet their end goal: protect the queen, make the sweet stuff.

“In the human world, active partnerships are no different, as everyone involved — like with bees — is working together to achieve goals that would otherwise be unreachable had they acted alone,” Reynolds says via email. “Using the partnership we have with Sundry & Vice, Comfort Station and Carriage House Farm as an example, the reason why it's working so well is that everyone from all levels of each organization is adding their own special sauce to fulfill our united mission of FEEDING BEES.”

Bees create honey as a way of storing food to sustain themselves over winter. According to an annual report by Bee Informed Partnership, the average honey bee colony loss from April 2017 to April 2018 in Ohio was 59.8 percent. And according to the Environmental Protection Agency, the decline of pollinators and the general declining health of honey bees may be related to a number of complex and interconnected stressors including pests — like hive beetles and varroa mites — pathogens and viruses; poor nutrition due to loss of habitat; exposure to pesticides; long migration routes; and lack of genetic diversity. Beekeepers, even hobbyists, need to look out for all of these.

Photo: Tommy Migaki
One of the speciality drinks at Comfort Station/Sundry & Vice

The issue also goes beyond the yellow-and-black European honey bee often associated with calls to #savethebees. There are over 4,000 species of bees native to North America. Of that number, 500 can be found in Ohio. As laid out in the 2018 New York Times article titled “The Insect Apocalypse is Here,” native pollinators in America have declined. Take the rusty-patched bumblebee: in the past 20 years, their populations have dropped 87 percent. And monarch butterfly populations fell by 90 percent. Both are native to the region.

Partnering with local businesses to advocate and raise money toward creating habitats is just one of the local initiatives honing in on the fight to reverse pollinator decline. (For more info on what’s happening locally, check out our feature from last year.)

The promotion kicked off yesterday (Feb. 18) and will run through Sunday, Feb. 23. The week also just so happens to coincide with Reynolds’ birthday — and what better way for a beekeeper to celebrate?

“Creating the drinks was a collaborative effort,” Reynolds says. “We had been playing around with the idea for a few months and decided to sit down back in January to hammer out a few recipes. After enjoying over a dozen (or so) cocktail combinations, we finally settled on our list of five and felt they would introduce a wide range of taste buds to our mission through the magic of honey.”

Also important, Reynolds says, was to include a non-alcoholic option for those who love bees but want to showcase their support without getting a buzz.

The full menu can be found at instagram.com/b_thekeeper.