Sleepy Bee Café is buzzing in Oakley: scrums of runners returning from training, coffee drinkers at the bar absorbed in electronic media, tables of toddlers’ moms making sure the syrup stays on the pancakes. The place is jam-packed, but the atmosphere is calm, quiet competence, not panic stations. A barista thoughtfully cuts a straw in half and spoons extra blueberry smoothie from the blender into a tiny cup for a young guest, rather than pour it down the drain.

Sleepy Bee, a breakfast and lunch café, held its grand opening on Dec. 21, and folks are flocking to this previously empty corner opposite the stately St. Cecilia Parish on Madison Road in Oakley. Owners Sandy Gross and John Hutton have made a lot of friends through their other neighborhood ventures, nearby Brazee Street Studios and the classic local children’s bookstore Blue Manatee. This is their first restaurant, but they’ve brought in a chef with great credentials, Frances Kroner.
Kroner’s career began early, when she started washing dishes at the original Boca Restaurant in Northside at age 14. She moved on to Northside’s now-defunct Slims, where she grew her commitment to honest, local food under chef Patrick McCafferty. After a move to Cleveland, where she staged for James Beard award-winner/Iron Chef Michael Symon’s Lola Bistro, she returned to Slims and to eat well celebrations and feasts with chef Renee Schuler, eventually developing her own catering and event company, Feast — one of Cincinnati’s first “pop-up” dining experiences.
Feast is “taking a nap,” Kroner says, as Sleepy Bee takes off. In developing the menu for Sleepy Bee, she drew on her chef’s experience, but also heavily on another influence: cooking for her two-year-old son, Avi. She makes pancakes all the time for him at home, she says, and knew they could be both delicious and a little healthier than expected on a restaurant menu.
Co-owner Gross also wanted Sleepy Bee to have a family-friendly menu. She has three children, and it was a pet peeve as they were growing up that she’d have to order adult food in order to get them anything healthier than typical kids’ menu choices, such as fried cheese sticks and chicken nuggets.
“I have an awareness of children being people,” Gross says. “Little people who need smaller portions of natural, good food.”
The café’s drowsy bumblebee logo came from Gross’ garden experiences with her children. She grew up in a gardening family and was always interested in nature.
“I had my own garden when I was 5 years old,” she says. “We never sprayed. The garden was full of butterflies and bees. When I had children, we’d go out early in the morning and see bees sleeping under the flower petals. You could actually pet them and feel how soft they were.”
She also spoke of having a monarch butterfly way station in her garden, a haven for the monarchs on their migratory path. But, as time passed, she noticed there were fewer bees and butterflies in the flowerbed.
“We screened a movie about the vanishing of the bees at Brazee,” Gross says. “So much of our food would not be here if not for bees. As an artist, I like to make connections, to show how things are integrated. So for the café, we celebrate the role of the bees.”
A huge bouquet of multi-colored glass flowers, fired in the kilns at Brazee, hang in a specially fabricated chandelier above the coffee bar, and custom tiles with fruits and vegetables are tributes to the bees’ hard work, as is the whimsical bee in the logo. Kroner’s friends from Cincinnati Ballet’s Rhythm & Motion group stopped by to “flash mob” the café during its opening, wearing bumblebee black and yellow stripes.
Much of the food for the café is sourced locally from farms with bee-friendly practices, including Holistic Acres eggs; Marksbury Farms humane, pasture-raised meats; and potatoes, sprouts and microgreens from nearby growers. Kroner will add more local vegetables next summer.
Her favorite menu item is the quinoa salad, packed with power grains, almonds and pomegranate seeds. She also loves the omelet she named after her son, the Avi, filled with spinach and avocado. The Bee Cakes are gluten-free, made with almond, quinoa and buckwheat flour. She’s proud of the house-made veggie burger she developed, made with three seeds (chia, sunflower and flax) and mushrooms.
“It’s health conscious, yes, but I had to add some things my husband would eat,” Kroner says. “So there’s a goetta sandwich for breakfast, a really good burger, bacon pancakes with whipped cream, and lots of choices for people who like to indulge.”
Sleepy Bee Café
Go: 3098 Madison Road, Oakley
Call: 513-533-2339
Internet: sleepybeecafe.com
Hours: 7 .m.-2:30 p.m. Monday-Friday; 8 a.m.-3 p.m. Saturday-Sunday
Scroll to read more Restaurant Reviews articles 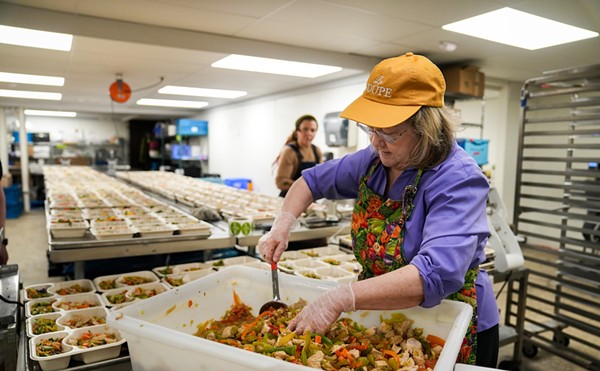